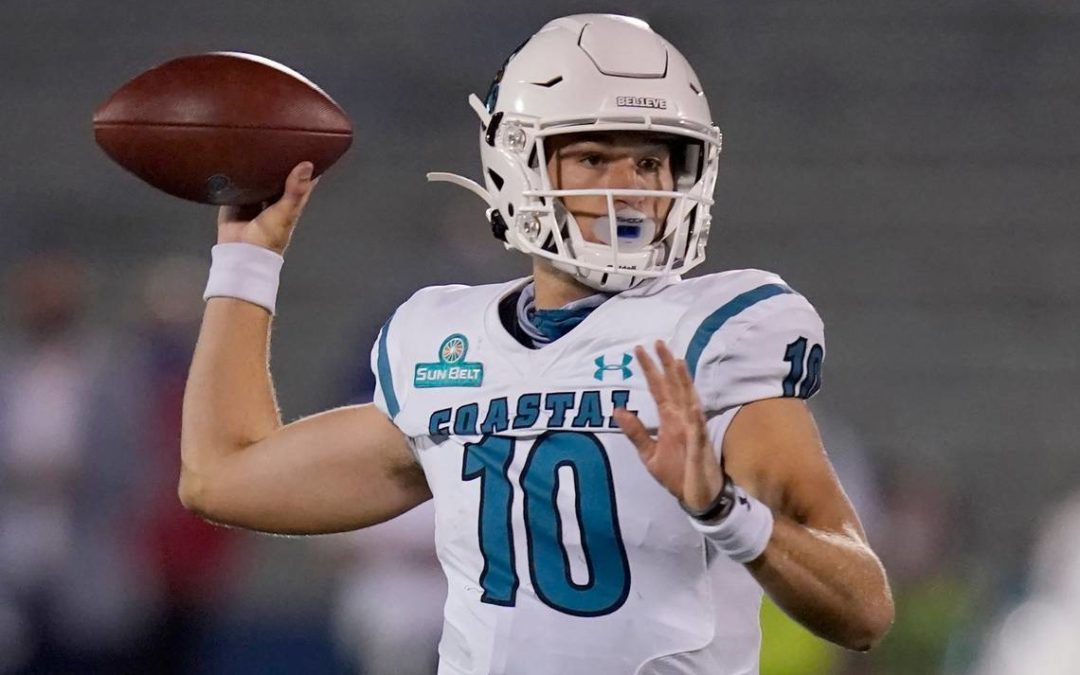 Grayson McCall is the signal caller for the Coastal Carolina Chanticleers. He has been leading his Chanticleers to an unprecedented season so far. The Chanticleers beat their first ever ranked team in their football program history Wednesday night.

The Chanticleers are currently 4-0 after beating Sun Belt foe No. 21 Lousiana Rajun’ Cajuns 30-27 with a kick from Massimo Bascardi to seal the deal with eight seconds left on the clock.

For McCall he’s still only a redshirt freshman and is absolutely ripping it this year. McCall is not afraid to take the ball himself and take a hit. He plays with a very old school style, which is awesome. The quarterback actually has three rushing touchdowns this season on 42 attempts for 184 yards. He broke a current season-long 22-yard run against No. 21 Louisiana and scored his third rushing touchdown on the year.

In the air, McCall is also tearing it up. He has already accumulated 930 yards with 11 touchdowns in just the first four games. Against Arkansas State, he threw a 72-yard touchdown which attributed to his four touchdown performance. Just to add the cherry on top, McCall also passed for 322 yards.

You cannot tell me that @McCall_Grayson is not the most underrated QB in NCAA right now. #ChantsUp.

McCall is easily a player flying under the radar for some. He should be on everyone’s board as a top college quarterback. At 6-foot-3, 200 pounds he fits the mold for a current prototype quarterback. McCall will still have to play this season along with two more before he is even draft eligible. This man is going to be unstoppable. Just think about a redshirt freshman who only played in two college games ever before this; he is already tearing the college football world apart!

The dual-threat quarterback Grayson McCall is someone that you are going to want to watch as he continues to blossom. There is a huge possibility he could be awarded in the near future for his amazing talents. He currently is on the Davey O’Brien National Quarterbacks Great 8 list. By the time McCall is done at Coastal Carolina, in two to three years, he could set many records and cement his name in Chanticleer history forever.