From Afghanistan To The NFL: Get To Know Ryan McCallian 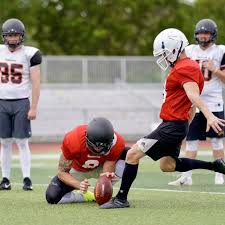 Ryan McCallian is a kicker who has never given up hope of playing in the NFL. He has always grinded and proved why he deserves a shot even after a a tour in Afghanistan. Prior to that, he attended the University of Northern Colorado where he played soccer for four years.

After college, he left for the military for five years. Once he returned home, he tried to use his GI Bill for eligibility at Colorado State University-Pueblo but was rejected.

He played semi-pro football for the Colorado Pirates. As a rookie, he won Special Teams Player of The Year. He was perfect on extra points, hit 83 percent of his field goals with a long of 48 yards. That alone shows he should have an NFL shot, especially with the way a lot of kickers are looking this year. Some NFL kickers have a 25 percent field goal completion rate this year.

What keeps him striving for his dreams of an NFL, or CFL, opportunity is his mother, kids, and his wife. McCallian and his wife have been married since 2013 and tied the knot before he went to the military. He credits her with helping him stay locked in on his dreams, being a supportive wife and an even better mother while he was away. She is at the field training with him a lot, whether it be hitting her own field goals or retrieving his footballs for him. McCallian says that he “couldn’t do it without her.”

Getting to Know Ryan McCallian

USN: How did you get started being a kicker and a punter?

McCallian: I have loved football my whole life and have been a die-hard Chiefs fan since before I could walk. Despite my love for NFL and college football I grew up playing competitive soccer and ice hockey. I always wanted to be a defensive back or a wide receiver, but soccer and hockey were year round.

I went to college at University of Northern Colorado where I played soccer for four years. I was a defensive center midfielder and center back. When I was 23 years old I enlisted in the United States Army and served five years. While in the Army I kept playing for the base soccer teams.

The real story begins with Afghanistan I was deployed to Bagram, Afghanistan from May 2016 to March 2017. I was/am a Human Intelligence Collector and I changed/grew immensely during my time in Afghanistan. While there I decided I was going to play in the NFL. For years I had lifted weights and trained but never done anything. So while deployed, I gained 15 pounds from 175 to 190 and my goal was to Wes Welker my way onto an NFL team as a wide receiver.

I returned home March of 2017 and I immediately joined a Washington State Semi Pro team called The P.C. Bengals. I began playing as a DB but quickly realized there was no kicker or punter. I began kicking for this team and realized that this was my position. The season ended in August and I continued training on my own until I ETS (Exit The Service) and moved home to Colorado. I immediately reached out to the Colorado Pirates and I played both the 2018 and 2019 seasons with them.

I quickly became known as the best and only real specialist in Colorado Semi Pro football. I did attempt to use my GI Bill to get my MBA and play for CSU-Pueblo during the 2017-2018 season. Coach liked my tape but, long story short, the NCAA would not grant me a one-year extension as my clock had started for three years at UNC. I finished my degree online while I was in active duty and that counted as my clock still rolling because I was technically a full-time online student.

At this point I knew I had to get a full time job as I have two daughters to support but this did not stop my training as I know I am good enough to kick in the NFL. With my combat experience the nerves and the pressure is something that truly doesn’t phase me. I plan on being the most athletic kicker in the NFL.

USN: In the NFL, would you like to do both or one over the other?

McCallian: So the straightforward answer is that in the CFL, I could do both and I would love to. In the NFL however, I would only do one and that would be kicking, or at least, I would imagine. I have never had any professional coaching and I am sure that with even 40 hours of professional coaching the decision would be easy of which one to do. But I truly believe I am capable to do either in the NFL, similar to Pat McAfee.

USN: With some special teamers being injured and guys opting out, what are some reasons an NFL team should sign you over the next guy?

McCallian: I believe this is a simple answer. The best kickers we’ve seen have done it by attaining a certain mental peace and calmness. We see so many great young kickers go from college to the NFL and fail. This is due to the high amount of pressure; or at least I believe it is. I have experienced the stress and discipline of the Army. The mentality that says there is no other option other than success. I went on several combat missions and adapted my mind to be able to focus on the objective and shut out the distractions.

I am a father and I maintain the training of an NFL kicker while still working a 40-plus hour a week job and raising my daughters. I truly will do this and kicking at the highest level is in my destiny. I am only 30-years-old in a position in which that is considered the prime.

USN: What is your longest in game FG and Punt?

McCallian: I love pregame. There is no other feeling than that, outside of a combat mission in

Afghanistan, but the next closest thing is before a football game. I go to sleep early the night before and wake up and eat cheerios. Only cheerios because I have a light stomach. I hydrate all day. Within three hours of pregame I make a water bottle and a pre workout drink. I sip on both and at two hours prior to the game I am on the field stretching. I listen to a lot of rap, Nipsey Hussle, Tech9 and NF are three of my favorites during pregame. Once I hit the two-hour mark my headphones are on and I don’t talk much. At an hour and 15 minutes prior to kickoff, I will go back to locker room and change. With 45 minutes left, I am on the field kicking. I will start with punts to warm up my leg, than I move to field goals. I’ll hit one or two from 20 yards back to 50. After this I will move into a couple kickoffs. By ten minutes prior to the game I am usually done kicking and I am mentally visualizing my success.

USN: Who would you say is your biggest inspiration

McCallian: My mom. She is the most giving person I have ever met. She raised five children in a blended family and is continuing to be a grandmother to seven granddaughters. She sacrifices and loves more than I can ever think is possible.