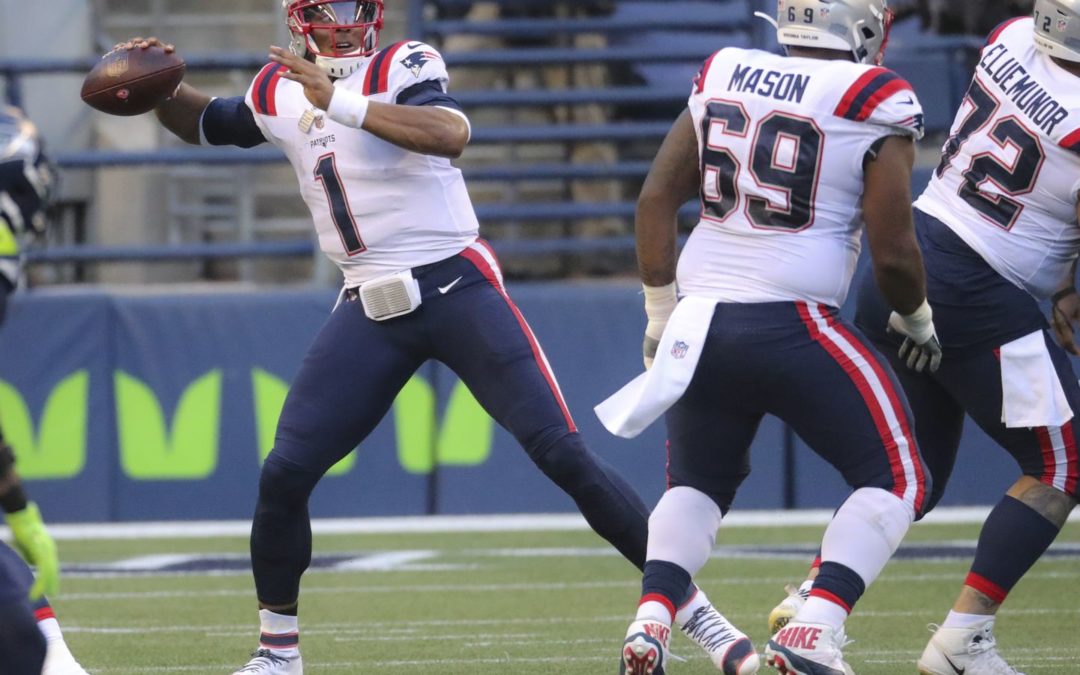 Hello and welcome back to another edition of the weekly NFL lines column. My apologies for getting this out to you late. Hopefully, you were able to capitalize on my column last week as I went 3-1 and now sit 5-3 on the season. This week was much harder to handicap as we have some intriguing games.

Pats are coming off a loss in Seattle which they had no business being there in the end anyway. Cam Newton stepped up and showed that he is still a very capable passer and one of the best quarterbacks in the NFL. The injury bug has hit both teams coming into this one but Cam accounted for over 95 percent  of the Patriots’ offense last week and I expect that to continue. The Newton to Julian Edleman connection was amazing last week and Cam was able to deliver a career day for Edelman. The defense was torn apart by pinpoint throws from Russell Wilson. They will look to rebound against an upstart Raider team that upset the New Orleans Saints last week with their tight end Darren Waller dismantling the Saints’ secondary. Look for Bill Belichick to take away Waller in this one and make Derek Carr beat them with outside receivers in tight coverage. I don’t like this matchup for the Raiders this week traveling east.

Tampa Bay will have to travel to Tom Brady’s house of horrors on Sunday to play the Denver Broncos who lost their starting quarterback last week to injury. Leonard Fournette showed up last week scoring a garbage-time touchdown and taking a bigger role from Ronald Jones. Brady hasn’t looked comfortable yet in Bruce Arian’s offense but gets back Chris Godwin this week. I think this is a game where the Bucs can put it together against a Denver team that played valiantly last week against Pittsburgh but the writing is on the wall. Jeff Driskel gets the start and he won’t be throwing to No. 1 wideout Courtland Sutton who is out for the year with a torn ACL. What’s left behind is an unproven bunch of guys looking to take a step up. I think Melvin Gordon will be fine in this game but it won’t be enough as the Bucs roll Denver in this one.

The Packers roll into this game full of confidence. In Week 1, it was Aaron Rodgers who dominated and led the Packers to victory. In Week 2, the other Aaron dominated as Aaron Jones stole the show and the Packers claimed another victory. The same can’t be said for the Saints who put up a dud on Monday night versus the Raiders. Drew Brees looked every bit of his age and the offense sputtered without Micheal Thomas. Alvin Kamara was the lone bright spot for the offense and Tre’Quan Smith did some nice things in Thomas’s stead. It wasn’t enough as the Saints’ secondary was shredded by Darren Waller. The good news for the Saints is the Packers don’t have a monster tight end. Davante Adams is going to be a tough call to go this weekend and that will put some more pressure on Aaron Jones to get it going against this very capable Saints’ defense. The Saints are in a prime spot to get some respect back from last week’s loss by taking it to the Packers here. The Packers have done well so far, but injuries could affect them this week. The Brees is done after Week 2 takes will have to sit burning hot for another week as I believe the Saints rebound here and get a huge home win in the Big Easy.

Appreciate your taking the time to read this week’s article if you want to hear all my sides and player props make sure to tune into the Bets Unwrapped podcast on Spotify. Make sure you check out mybookie.ag and use the code USN100 for a 100% deposit match +15 dollar bonus. Go and signup now. Follow me @Cmoney52 and let me know who you are wagering on. See you soon!!