What Comes Next for the Oklahoma City Thunder? 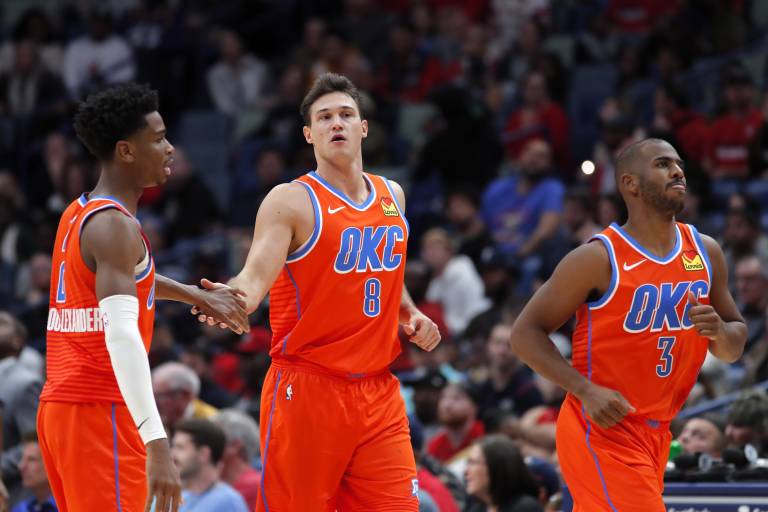 The Oklahoma City Thunder just came off of a shockingly good season and were a couple of possessions away from making it to the second round of the NBA playoffs. The Thunder proved all of their doubters wrong after they  wrote them off and didn’t think they had the tools to be a playoff team. Chris Paul showed he can lead a team to the playoffs and is one of the best leaders in the NBA. Young players like Shai-Gilgeous Alexander and Lu Dort stepped up and played big roles for the team. Unfortunately, the amazing run is over after a Game 7 loss to the Houston Rockets. With some key players contracts up, and Sam Presti’s history of making big trades in the offseason, what’s next for this Thunder squad?

Players like Alexander, Dort, and Darius Bazley are the future of the Thunder so their spots on the team should be safe. Veteran Danilo Gallinari is an unrestricted free agent this offseason and will probably be expecting a big deal. He played a big part on the Thunder this season but are they going to pay him when they already have big contracts with Chris Paul and Steven Adams? I don’t believe so. Nerlens Noel is also a free agent and played a role off the bench for the Thunder this season. If the Thunder do not bring back Gallinari and Noel they will need to find replacements. They also need to make the choice of keeping Paul or trading him to get rid of his huge contract and acquire more assets for the future. Either way, the Thunder are built to be successful in the future.

Last offseason when the Thunder traded away stars Russell Westbrook and Paul George, they didn’t give them away cheap. Along with Alexander, Paul, and Galinari, the Thunder got a haul of picks. In the George trade with the Los Angeles Clippers, they got the Clippers 2022,2024, 2026 first-round picks and two first-round choices from Miami in 2023 and 2025. In the Westbrook trade with the Houston Rockets, they got the Rockets 2024 and 2026 first-round picks and pick swaps in 2021 and 2025. That is 15 first-round picks over the next six NBA drafts with our own draft picks included. The Thunder have a great history of drafting with examples like Westbrook, Adams, Kevin Durant, James Harden and Serge Ibaka, so there is a good chance those picks are used wisely.

Even with all of those picks the Thunder are still in a weird spot right now. They have a good roster and a team the fans love that found success this season. They are not legit title contenders and need a lot of help to be considered title contenders. Paul is getting paid a lot and even though he has been nothing but great for the Thunder, it may be time to move on from him. The Thunder already have two great guards in Gilgeous-Alexander and Dennis Schroder who are not as expensive right now. I think we move forward with our young guys and see if we can move Paul for another young, progressing player and/or some draft picks. I think we let Gallinari walk in free agency and let Bazley take his spot after an impressive rookie season.

If the Thunder don’t make the playoffs next season, it’s okay. They are building for the future and need to give their young players more time to mesh together and develop. By the time they’re all in their prime, our draft picks will start kicking and we will have even more young talent. Regardless of what the front office does with the team this offseason, I’m excited for next season. If they decide to keep CP3 and run it back then I can’t wait. And if they decide to roll with the young guys and build for the future, then I am excited to see our young players develop.