Five Projected Second-Round Prospects Who Could Be Draft Steals 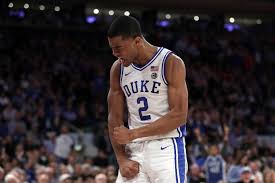 We have seen second-round picks turn into star players. Manu Ginobli is arguably the greatest sixth man of all time and he was taken with the 57th pick of the1999 NBA Draft. Dennis Rodman is one of the best power forwards of all time and was named Defensive Player of the Year in 1991 after being selected with the third pick in the second round of the 86′ draft. If you look up the draft footage of Nikola Jokic being selected there is a Taco Bell commercial on when the Nuggets took him with the 41st pick in the draft. And yes, I am serious. There are so many examples of how second round picks can be extremely valuable. Here are some prospects that are projected to go in the second round that I think can turn in to very good NBA players.

Cassius Stanley has one of the most entertaining high school mix tapes I have ever watched. He is extremely athletic and is a great offensive player. He did not have the freshman year we all thought he would at Duke but he still averaged 12 PPG and 5 RPG for the Blue Devils. I hope a team that is already contending for a title gives Stanley a chance because he can turn into a very impactful player.

Last season Winston was projected to be a top-10 pick but decided to return to Michigan State for his sophomore year. His draft stock fell, but I think that is more due to the talent in this draft than his production. Winston averaged 18 PPG last season and showed a lot of improvement in his game. I think he should be a first-round draft pick but he will likely fall to the second-round. Whoever drafts him is getting an absolute steal. He has the potential to be a All-Star caliber player in the NBA.

Jones was a part of the star studded Duke team with Zion Williamson, R.J. Barrett, and Cam Reddish. Jones did not get to shine playing with those guys so this season was supposed to be his year. Instead, he did something I really liked; he was a team first player. He made all of the right plays and got his guys open. It did not help improve his draft stock, but it showed he is all about the team. I do not think he will be a star, but I think he can be a very good role player. He is a better defender than his brother Tyus, who is in the league right now. He can score from all three levels and is a great playmaker. Whoever drafts him is getting a hard worker who will do whatever it takes to win.

I truly believe Riller is one of the best scorers and shot creators in this draft. His ability to finish at the rim through contact is as good as anyone in this draft. He can knock down shots from the outside and has a nasty step-back jumper. He is a great playmaker, but is most definitely a score-first guard. He averaged 21 PPG for Charleston and was easily the best player on the court every game for them. He is not going to be a high draft pick because he did not go to a big name school and did not face the toughest competition. Whoever drafts him is getting a natural scorer with a lot of upside who can come off the bench and score a lot of points.

It really surprises me that all of the draft experts have Childs being a late second-round pick. Childs is a great scorer who is 6-foot-8 and can create his own shot. He does need work on defense and finishing at the rim, but he is already a very good player. He can knock down shots from outside and shot 48 percent from three this season when he averaged 22 PPG at BYU. If he can improve his lateral quickness and learn to finish through contact at the rim he can turn into a very good NBA player.