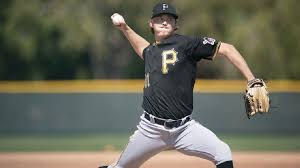 This season, the Pirates have had a lot of unfamiliar faces on the squad. That is if you do not follow the minor league system. One of which is relief pitcher Nick Mears. To date, he has only pitched 5.0 innings in the bigs. Mears never even touched AAA level since he went straight from AA to the MLB. Sure, he was on the taxi squad, but that is basically the extended spring training for 2020. I already see tons of potential in his game.

In his senior year of high school, he actually tore his UCL in his pitching elbow and battled through the entire season with the torn ligament. That is heart! After his senior season came to a close, he elected to undergo Tommy John Surgery. Thus, missing his entire freshman season of college baseball.

Mears was able to pitch that fall and seemed to be throwing well. He had the fastball back in the low 90s already and was all ready for his first season (second year) of college baseball … until he was in a dirt bike accident just two days prior to the season starting. He broke his collarbone and had to sit out that season as well, sadly.

That summer, he found himself playing in the summer league for the Willmar Stingers of the Northwoods League. He dominated in just 9.1 innings with 18 strikeouts and a 17.4 K/9. Also, he recorded two saves.

That fall, Mears almost quit baseball when one of his grandfathers suffered a heart attack and passed away. Shortly after, one of his own teammates sadly took their own life. Then in the spring, his other grandfather tragically passed away, unexpectedly. That grandfather would always come to his baseball games to cheer him on, so that especially took a toll.

Nick Mears has been through hell and back. He lost the people closest to him, two college seasons and endured Tommy John surgery. Look up perseverance in the dictionary, a picture of him should be next to it.

The 6’2 right handed flamethrower was signed by the Pittsburgh Pirates as an undrafted free agent in 2018 after attending Sacramento City College. This a huge reason that I’m a massive advocate for Mears. He played in the CCCBCA, essentially JUCO, and community college level which is really awesome. Small school players are always my favorite. Mears tore it up there in his one season. He pitched 31.2 innings with 39 strikeouts, also recording six saves. He appeared in 18 games with a 4-1 record.

Fun fact about Nick Mears: In his final college summer ball outing for Willmar, he struck out nine straight batters in one night.

In the Pirates minor league system last year, he jumped up three levels. He garnered a 3.28 ERA, 5-3 record over 46.2 innings on the hill with a fantastic 13.3 K/9 and a measly 3.5 BB/9. He has already reached 101 mph on the radar gun. He has exceeded expectations and it’s truly amazing that he has come so far.

Mears made his debut against the Tigers facing future hall of famer, Miguel Cabrera, on 8/3/2020. He forced Miggy into a pop up that went foul for an out. The out ultimately was the collision of the first baseman, Phillip Evans, and right fielder, Gregory Polanco.

Mears has shown great promise facing big leaguers. The 23-year-old flaunts a fantastic 12.6 K/9 over 5.0 innings. People may try to argue that his BB/9 is also at a 12.6, but you have to realize he is still developing and is trying to miss bats. That will most likely come down to around a 3 BB/9 once he settles in.

I have full confidence in Nick Mears and I hope to see him in the Bucco bullpen for years to come.