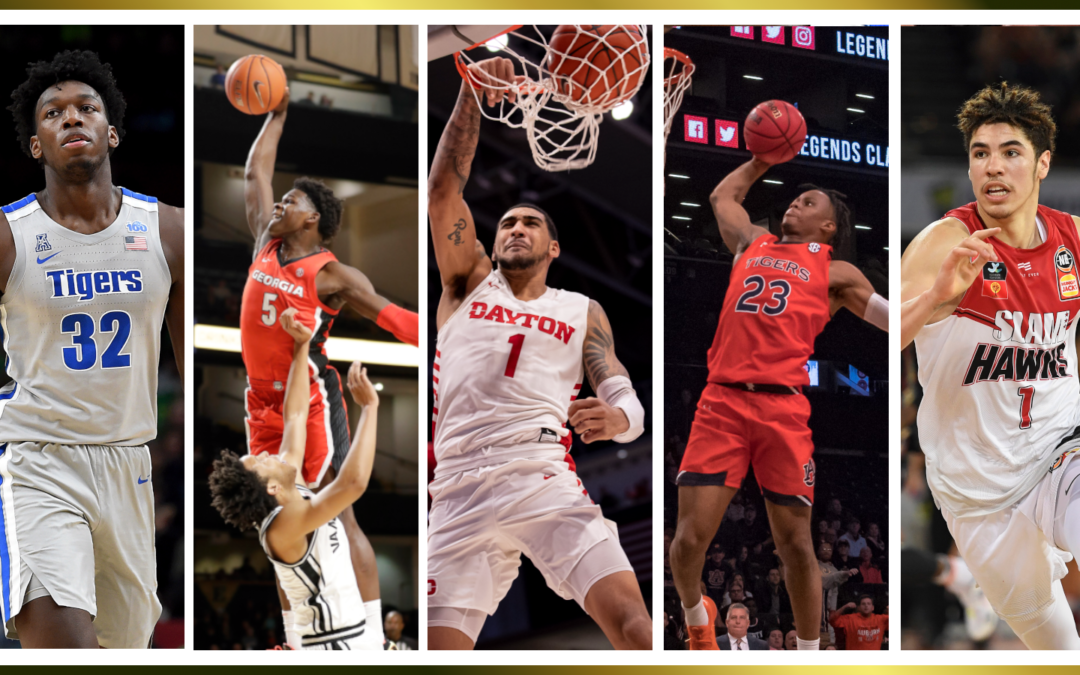 The 2019-2020 NBA season has been a roller coaster, to say the least. The season was suspended and now all of the playoff teams are in a bubble in Orlando. There will be a short offseason and the draft is not too far away! With the lottery in the books, I think it is time for a mock draft.

The Timberwolves will have their first full season of D’Angelo Russell and Karl-Anthony Towns next season and they have high expectations for the duo. With that being said, they can’t score every point by themselves and will need some wing scoring. That is where Georgia’s scoring machine Anthony Edwards comes in. The 6’5” wing averaged 19 ppg on 40% shooting for the Bulldogs. He will make an immediate impact for the Timberwolves and will be a great piece for the future.

I think the Warriors will try to trade this pick for a proven veteran considering they are in win now mode and are still title contenders. If they are unable to trade the pick, I believe they will look to boost their center position with James Wiseman. Wiseman is a great rebounder and interior finisher, but he can also stretch the floor and hit from three which is what the Warriors are all about.

The Hornets desperately need a star in the organization. They lost Kemba Walker and Terry Rozier is not an ideal replacement. Lamelo Ball has been under the spotlight since he was a freshman in high school, so being the face of a franchise is something he would run with. Lamelo is not the best shooter or defender, but his playmaking ability is top tier. He’s also amazing at finishing at the rim even with contact. He keeps growing and is around 6’8” right now as a point guard. He can help change the franchise for the better and may make the Hornets a more attractive free agent destination.

Finally, the Bulls are changing for the better. They made moves in the front office and fired head coach Jim Boylen. They have a very talented young core of Zach Lavine, Lauri Markkanen, Wendell Carter, and Coby White. Deni Avdija is a great all around player with amazing playmaking ability. He can fit right in with the Bulls backcourt and would be a great piece to add to their young core.

The Cavs made an interesting move selecting a point guard for the second straight season last year in Darius Garland. I doubt they go with another wing or guard considering they desperately need help at the center position. The fifth pick may be a little high for Okongwu, but I think it is the right pick for the Cavs if James Wiseman is not available. He has great size and is great at controlling the paint. He is also a solid defender which is something else the Cavs need out of their big men.

The Hawks have a very bright future with their young core of Trae Young, Deandre Hunter, Cam Reddish, John Collins, and Clint Capela. Drafting Okoro will provide them another great wing to come off of the bench and add instant energy. Okoro played great for Auburn and showed his shooting and scoring ability all season. He would fit perfectly with the Hawks system.

The Detroit Pistons need a lot of help. Other than Blake Griffin, every other position needs an upgrade. Tyrese Haliburton is a solid all around player with a lot of athleticism. He is explosive when he attacks the basket and is a great finisher. Haliburton has the ability to play point guard due to his playmaking, but he thrives playing off the ball. I think he would be a great piece for the Pistons’ future.

Poor Knicks. Last year they thought they were going to finally have a title contending team and wound up with R.J. Barrett, Julius Randle and a bunch of forwards. Both are great players, but not championship pieces yet. They fell in the lottery, but this draft is deep, so it is not a reason to panic. There is no clear cut #1 pick, so having the 8th pick is still a good position to be in. They need someone to run the offense since Dennis Smith Jr. is not going to be their guard of the future. French guard Killian Hayes is the perfect Knicks point guard for the future. The lefty can create his own shot, but his best skill is creating shots for his teammates. Hayes is a solid defender and would be a great piece to pair alongside R.J. Barrett for years to come.

I am really excited to see how good the Wizards can be next season. A healthy John Wall returns and Bradley Beal is coming off the best season of his career. Alongside rookie sensation Rui Hachimora, they have a very solid team. Adding Obi Toppin would be a perfect fit for John Wall. A great defender who loves to rebound and has the ability to shoot the three. I can already see all of the pick and pops he and John Wall would run. I think if Toppin is still available at this pick, it is a no brainer for the Wizards.

Anthony’s draft stock has fallen due to North Carolina’s disappointing season and his torn achilles. Before the college season, he was a lock to go top five and I still believe he has that potential. The Suns had a phenomenal showing in the bubble going 8-0, but I still think they need help at the point guard position. Ricky Rubio was solid for them, but they need a guard for the future. Anthony is an amazing scorer and playmaker with amazing athleticism. If he can recover from that injury and still play at the same level as before, I think it would be an amazing fit for the Suns and should be the player they select.