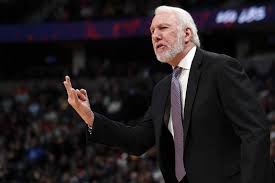 According to The Athletics’s Shams Charania, the Brooklyn Nets are interested in acquiring Gregg Popovich to coach the team next season. If this were to happen, Brooklyn would have to offer draft compensation to the Spurs because Popovich is still under contract. With that being said, Popovich would have to be interested in the Nets job, which remains to be seen.

Brooklyn just got swept in the playoffs by the Toronto Raptors, but they were depleted by injury. Next year, they should have a healthy Kevin Durant, Kyrie Irving, Spencer Dinwiddie, and DeAndre Jordan. If the Nets were somehow to get Popovich to coach, I believe they would be the favorite to win the Eastern Conference.

Brooklyn’s front office has quite a lot of Spurs Alums. The General Manager is Sean Marks, who played for Popovich and worked with him as an assistant coach and assistant general manager. Also, interim coach Jacque Vaughn, assistant GM Andy Birdsong, assistant coaches Bret Brielamaier and Tiago Splitter have all been with San Antonio. Clearly, the Spurs pedigree is already there.

It may be a pipe dream for the Nets to nab Popovich to coach, but it’s worth a shot to try to pry him away. We don’t know how many more years Popovich wants to coach and if he even wants to leave the Spurs, but Brooklyn has to shoot their shot. With his consistent success making the playoffs and five championships rings, Popovich would have the attention and respect of the Nets players immediately.

Although the move makes sense, Brooklyn still needs to consider other options. According to Shams Charania, Jason Kidd, Ty Lue, Ime Udoka, Jeff Van Gundy, and Vaughn are on Brooklyn’s list. It will be an exciting process to follow over the next few months.