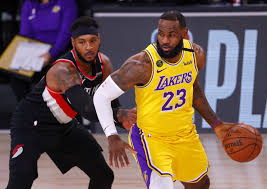 The Los Angeles Lakers came into Thursday nights game down one game to none against the Portland Trail Blazers. Los Angeles needed to bounce back to get the series tied at one and regain momentum.

After shooting 5-32 from three in game one, the Lakers shot 14-38 from beyond the arc in game two, which was good for 36.8%. Kentavious Caldwell-Pope led the way making 4 out of 6 three-pointers. Caldwell-Pope also added 16 points in the game two victory.

Anthony Davis was a monster in the game, scoring 31 points on 13-21 shooting from the field, while also adding 11 rebounds. Davis was doing everything scoring in the post, taking his man off the dribble and hitting three-point shots. He was big-time in this game for the Lakers; when Davis is aggressive, the Lakers are a much better team.

The Lakers won the game with LeBron James only scoring 10 points, but he did add seven assist and six rebounds. James also did a great job controlling the tempo of the game. Controlling the game’s tempo allows the Lakers to set up their defense and not let the Blazers play at a  fast pace.

Los Angeles defense was impressive in the game, they held the Blazers to 88 points, and they only shot 40% from the field and 27.6% from three. Lakers did an excellent job trapping and pressuring Damian Lillard; he shot 1-7 from three-point land. When the Lakers can get their defense set, they are an elite defensive team.

With the blow out win, the Lakers got a chance to get J.R Smith and Dion Waiters some minutes to find their rhythm. I think the Lakers will need contributions from both players to be successful. Waiters can create his offense, and Smith can knock down open shots when he is on.

Game three will be a big game for each team; both teams will try to come out and take control of the series. Look for the Lakers to come out and play pressure defense, and they will need to continue to knock down open shots.