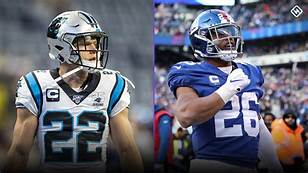 It’s that time of year again! When average Joes come together to display their great knowledge of the NFL. We will soon begin hours of studying teams and players, if you haven’t started already, tuning in to nonstop podcasts and even harassing certain players on Twitter, just trying to get a competitive edge on upcoming drafts. Here is a cheat sheet to help you gain a bit of an edge for your draft in regards to running backs.

1) Let’s not beat around the bush. If you have the number one pick, you are picking Christian McCaffrey. Do not be the guy that thinks he has outsmarted everyone in the world and assumes this is the year that CMC falls off. If you pass him up, I can guarantee that your league is already questioning everything you say about sports! It may be a different story if you play in a Superflex league.

2-3) You cannot go wrong at the 2-3 pick with either Saquon Barkley or Ezekiel Elliott. I would give a slight edge to Barkley because the Giants’ offense will run through him and I believe Saquon is a bit more versatile. On the other hand, Zeke is looking to push for another 1,700 total yard season, but with so many offensive weapons in Dallas, his receiving stats may take a small setback.

These picks are where it starts to get tough and where a lot of ‘experts’ start to have different opinions. Derrick Henry was a flat-out MONSTER last year averaging 102.7 yards per game. That may be a bit extreme to repeat, but I believe his touchdown numbers should rise this year. I have him at the 4th spot in redraft leagues, but at 6 in dynasty due to wear and tear on his body. He should expect a heavy workload with the departure of Dion Lewis although they drafted Darrynton Evans to back Henry up.

In both redraft and dynasty leagues, I have Dalvin Cook at the 5th spot. Cook was a steal in a lot of drafts with a second round ADP and won a lot of leagues. He definitely performed as a top tier RB with over 1,600 total yards and 13 touchdowns. His role in the offense will only climb if he can maintain health and get his contract situated.

Now, I know some of you are thinking, “How can you let Alvin Kamara fall to the 6th pick?” His productivity is not the question for me, but his health is. Last year was a down year, for sure, but still contributed 1,200 plus total yards and scored 6 touchdowns. The Saints offense runs through Drew Brees, who now has a WR2 in Emmanuel Sanders, and he will take some targets away from Kamara, but may end up just opening more space for him.

The 7th may be the hardest rank, Clyde Edwards-Helaire. The high buzz comes from his productive college career at LSU and Damien Williams’ choice to opt-out of this season due to Covid-19. Edwards-Helaire lands on an explosive offense with unlimited weapons, so we expect his role to be his high selling point in redraft and dynasty.

Josh Jacobs comes in next at the 8th slot. Coming into his sophomore year, Jacobs has over 1,100 rushing yards and seven touchdowns. I have high hopes that Jacobs won’t only repeat his rookie year, but the whole Raiders offense will perform well. I expect better play from Derick Carr with added passing options like rookie stand out Henry Ruggs III to pair with Darren Waller and Tyrell Williams. This will open more space for Jacobs to not only succeed in the run game, but to develop as a dynamic passing threat as well.

Here we are at the 9th pick and just now mentioning Joe Mixon. As crazy as it seems, Mixon has had a bit of a quiet offseason and, depending who you talk to, isn’t a top 10 RB this year. Depending on who’s in your league, he could be a steal in this year’s drafts. With the inconsistency and injuries of the entire Bengals team last year, Mixon still mustered up a good statistical season which is nothing short of extraordinary. With the first overall pick now under center, newly acquired Jonah Williams on the OL, and Bengal legend A.J. Green starting to get healthy, Mixon’s workload should be heavy with many opportunities.

Rounding out the top 10 is Nick Chubb, who only falls this far down the list because he recently entered the concussion protocol and Kareem Hunt is looking great with the first team in Chubb’s absences. Chubb finished 2019 with just under 1,500 rushing yards, which should see a slight dip, but if he remains the lead back with Hunt used in late downs/passing situations, I expect another big year from Chubb. In later rounds, I will keep a close eye on Hunt to try and snatch him in the late third or early fourth round.