A Hitter The Pirates Need To Look At 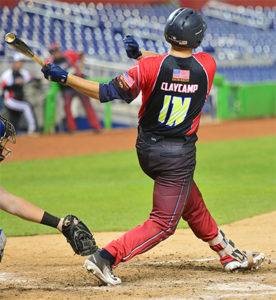 The Pirates are struggling this year and struggling hard. Sure, there are some players showing up like Colin Moran, Kevin Newman and Cole Tucker, but the team lacks depth and needs to address that. Today, I will be analyzing a hitter that the Pirates can’t miss and absolutely need to give a shot to.

Sam Claycamp is our featured player today! He is built well at 6’2, 205 lbs, bats and throws right and plays infield. His versatility is attractive with the ability to play third base, shortstop, and second base. He currently is a teammate of former MLB superstar, Brandon Phillips, as well as Robby Rowland on the Lexington Legends and is having a great year to date. He is hitting .378 AVG (17-45) with five doubles and one home run, which is very good. Plain and simple, I am shocked that he isn’t with an affiliated MLB team.

Claycamp played Divison III baseball at Franklin College. In 2017, he showcased his power with a two-home run game against Transylvania. On the year, Claycamp had a .347 average in 38 games, hit seven home runs, 34 RBI’s and 17 doubles. In 2018, he hit .316 with nine home runs, 51 RBI’s, 12 doubles and 51 runs scored while starting all 44 games. As a senior in 2019, he hit .400 with four home runs, 48 RBI’s, and eight steals in 46 games. He has always been a dominate hitter averaging well over one RBI per game through those two years alone.

He played one year with Division I, Dayton his freshman year. He did have a perfect .1000 fielding percentage, and one RBI.

Claycamp would really mold well in the Pirates system, in my opinion. In the infield, they have decent depth at the moment, but it seems like the Pirates are probably looking to deal Adam Frazier elsewhere. Claycamp would most likely be sent to A+ or AA anyways with an estimated MLB arrival of 2022, most likely. If he is hitting as well as he is now, just imagine what he could be in a year or two from now. It would be a massively underrated investment for the struggling Bucs. Sometimes signing a player with Claycamp’s hustle, bat, and heart helps mold a team together when they need it most.

I personally have full belief in Claycamp and there is no reason he shouldn’t be in affiliated ball. The Bucs are already a team composed of young underdogs and that is exactly who he is as a player. Feed the fire to help the Pirates and sign Sam Claycamp.