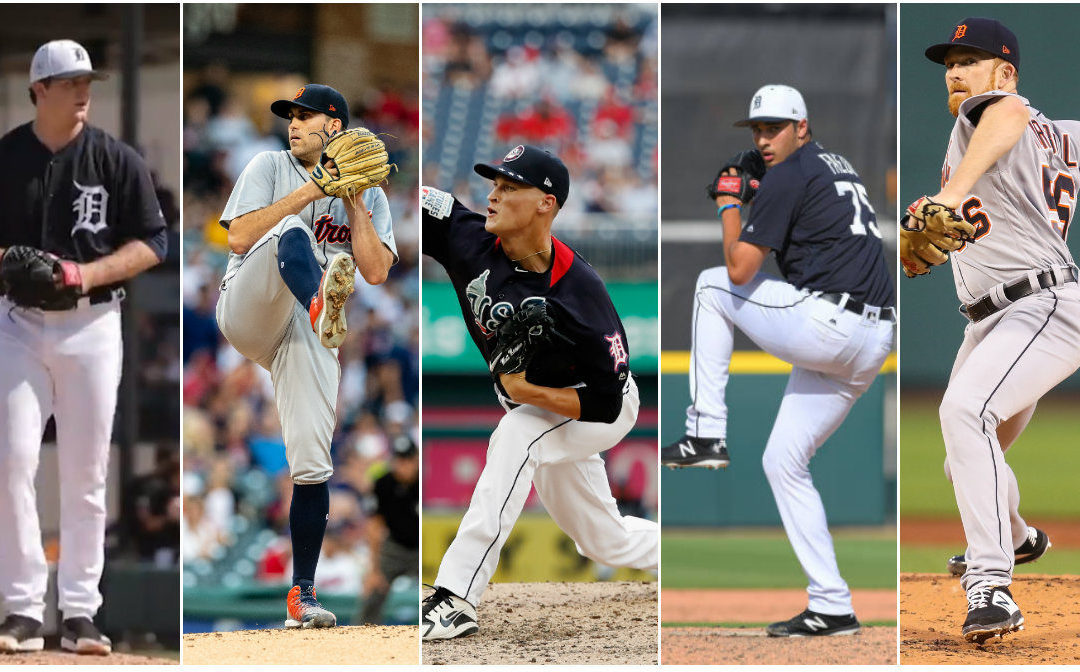 The Detroit Tigers indubitably have some of the best young pitching prospects in the entire MLB. To name just a few, Tarik Skubal, Casey Mize, and Alex Faedo. Stats talk, obviously, but there is more to a ballplayer than statistics. One of the biggest tools for a player is the ability to keep their composure once you get shelled or stuck in a jam. A perfect example is Detroit Tigers starting pitcher Matthew Boyd. He has been having a rough year, but he shows zero emotion. That is huge because as soon as your opponents see a weakness in you, they will exploit it. With all things considered, here are my top five Tigers pitching prospects.

A pitcher may be ranked as a mid-rotation piece and be ranked higher than an ace. Not every team has their best pitcher at the #1 slot. For example, the Tigers have Matthew Boyd as the ace, but Spencer Turnbull is the best starter. It truly is all about placement in the rotation.

What the recent additions mean for Manning and Alex Faedo: https://t.co/1RfmL6qdZh

Faedo was the Tigers’ first-round pick in the 2017 MLB Draft. Back in the summer of 2018, I saw Faedo pitch in person for the AA Erie SeaWolves and I’ve been a fan since. His delivery is unique and that is also a good to deceive hitters. He throws mid 90’s for his fastball and a nasty slider to pair with it. Faedo added an average of 150 RPMs on his fastball and 200 RPMs on his slider in the 2018-19 offseason, putting them both above average.

Last season he threw a combined no-hitter against the Bowie Baysox. He struck out 10 batters on three occasions. The right-hander struck out 12 against Reading.

I don’t see why people sleep on him so much since he has proven he’s an excellent rotation piece, he can strike guys out (over 10 a game). He has the best slider out of any of the next guys which is the bread and butter of the MLB at this point. I have always liked different and Faedo is a different style of pitcher.

Yeah, you read that right. That is indeed a 17.4 K/9, absolutely nasty. Skubal, a ninth-round pick of the Tigers back in 2018, moved up three levels in that year alone. He actually missed most of 2016 and all of the 2017 season due to Tommy John surgery. There were obviously a lot of questions if he could regain his supreme stats, he did that and more. He is just 23 and made his MLB debut yesterday.

Skubal was not great in his debut, but he’s never played higher than AA. He can only improve from here! He went 2.0 IP, 1K,1BB,4ER,1HR. If he can lower the walks and keep the long ball in the park, he can easily be a top rotation piece.

Mize just made his MLB debut and he looked decent. It wasn’t a no-hitter, like his AA Erie debut, but was still a good first outing. Mize went 4.1 IP, 7H, 3ER, 0BB, 7K on 73 pitches, 49 being strikes. That splitter of his looked great even though it’s not the most popular pitch in the bigsanymore.

Hopefully, once he settles in, he’ll be able to rekindle the form he had when he first came up to Erie last year. He went 6-0 with a 1.21 ERA. Mize looked ‘a-Mize-ing’ all last year and I hope it translates.

Manning is a tall, lean lefty that can throw fire. He is the guy that, in my opinion, has the highest potential out of these four pitchers listed. He won the AA Pitcher of the Year award last year after his wicked 133.2 performance. His fastball touches 99 mph and it wouldn’t shock me if he would put that over 100 mph soon.

Manning has a hammer curveball that he proceeded to use as his main strikeout pitch. He also features a pretty good changeup in is arsenal. Reports were he was working on that changeup a lot in the offseason to be able to repeat in his delivery. What is most attractive is his ability to keep his poised and confidence on the mound.

It kills me to put Burrows at five because he has always been so good. He struggled last year as the walks ate him up a bit. He also dealt with nagging injuries, mainly bicep tendinitis.

Burrows is a pitcher that punches right at you. He features a fastball that tops at 97, but typically will sit around 93. He has a changeup that comes at you in the 81-83 range. The problem pitch is his curveball, a 12-6 curve to be exact. More like a power-curve, it comes in about 78-80, but he hasn’t nailed it down yet completely and it sometimes gets smacked. He’s been working on a slider this off-season and if he could get that down, Burrows could jump into the back of the rotation.

So far, Burrows has pitched 5.1 MLB innings, all out of the bullpen, with a 5.06 ERA. He has struck out 3, walked one, but the concern is that he has given up two home runs.

Now, let’s discuss which young Tigers’ arm you think will be pan out the best! Let us know at @unwrappedsports on Twitter and Instagram.