Lakers vs. Blazers – Round One 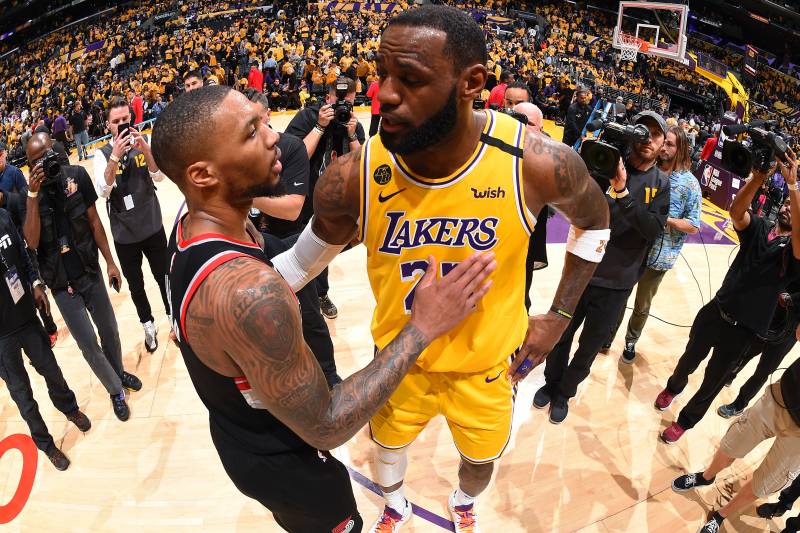 Damian Lillard has been on a tear in the bubble. He has scored 154 points over the last three games and won the “Bubble MVP” award. While Damian Lillard and the Trail Blazers have been a great story in the bubble, they are no match for LeBron and the Lakers.

The Trail Blazers are missing a key component that is more than necessary for playoff success; Defense. Portland has allowed the 3rd most points in the bubble and has the 3rd worst defensive rating. Despite the Blazers having a duo of defensive anchors in Jusuf Nurkic and Hassan Whiteside, they lack defenders to throw at LeBron James. Blazers’ forward Trevor Ariza opted out of the NBA restart for personal reasons, so their one capable player to defend LeBron isn’t with the team. The Blazers two best players, Lillard and McCollum, don’t put in much effort on the defensive end because of the load they have to carry on the offensive side of the ball. Carmelo Anthony can string together a few defensive stops, but he hasn’t really played defense consistently since Denver, and even then, it wasn’t that great.

The point being, LeBron has been known to dominate in the playoffs against some elite defenders. Examples being Kawhi Leonard, Paul George, Draymond Green and so many more. So, imagine how LeBron will fare against the likes of Gary Trent Jr. and Carmelo. I believe LeBron will look just like he did in the 2018 playoffs, only this time, he’ll have Anthony Davis and Kyle Kuzma by his side instead of Kevin Love and Jeff Green.

Clearly, defense is a problem for the Blazers. The matchups are not in their favor and they allowed sub-par offensive teams such as the Nets and Grizzlies to score 134 points. Nonetheless, their offense is what has gotten them to this point. They have the highest offensive rating and have scored the most points in the bubble. Their star Damian Lillard is on fire, ranking 1st in total points and points averaged in the bubble. Their lethal offense is scary, but the Lakers have one as well. The numbers might be a little skewed in the Blazers favor due to the lack of motivation for the Lakers in their seeding games since they locked up the 1st seed in their third game. LeBron and Anthony Davis are the offense in their own right. If the shooters can start hitting their open shots as they were before the season was suspended, their offense will be right back on track. The Lakers ranked 4th in offensive rating and 7th in points per game before the NBA was shut down.

There is no doubt in my mind that the Lakers will pick up where they left off once the playoffs start. One thing is for certain though, the defense will always be there. The Lakers rank 3rd in defensive rating and 3rd in points allowed. Come playoff time, defensive stops are crucial, especially at the end of games. That won’t be a problem for the Lakers.

The Lakers are in no position to panic. I would not be surprised if the Blazers take one or two games purely off of Damian Lillard’s hot hand, but it won’t be nearly enough to knock off the best team in the Western Conference. LeBron James has never lost a 1st round series in his 17-year career; This series won’t be any different.