Players That Popped In The Bubble 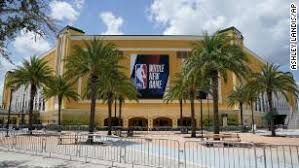 Finally, after over 100 days of no basketball, the NBA made its way to Orlando. The ‘bubble’ hosted 22 teams to play eight games each to determine the seeding for the NBA playoffs and which team would get that oh so important 8th seed in the wild, wild west. It was, and will continue to be, a giant AAU tournament. These players grew up playing in that environment in their younger days which means guys you would least expect and players that finally reached their potential finally popped in the NBA bubble. I’ll be talking about three players that stood out to me and can continue to add success to their careers and their teams moving into the playoffs and beyond.

Let us start with one of the most underrated players in the NBA and a certified HOOPER, T.J. Warren. Warren had been carrying the load this season along with Sabonis as Victor Oladipo recovered from an injury the season before. He had averages of 18.7PPG, 4REB and 1.4AST before coronavirus and was a top 10 SF in fantasy basketball. In the bubble, he put the league on notice. He proved he is someone who can get his own shot and score in many ways. In the bubble, through 8 games, Warren put up numbers of 31PPG, 6.3REB and 2AST while increasing his percentages from 52.9FG% to 57.8, 37.5 3% to 52.4 and 81.2 FT% to 88.9. He elevated the Pacers to the 4th seed and will need to continue to put up numbers like this if the Pacers expect to compete with the complete team that the Miami Heat are.

The second player that caught my attention is Michael Porter Jr. This man was the consensus number 1 overall pick in his draft class until he hurt his back in college and fell to 14. He is finally getting playing time and he has put the league on notice. Before coronavirus, he was only playing 14 minutes a game, but he took off in the bubble. He went from 7.5PPG all the way to 22, 4.1REB to 8.6 and 0.7AST to 1.6 in 33 minutes per game. He also increased his percentages from 49.5FG% to 55.1, remained the same from the 3 point land at 42.2% and increased his FT% from 76.7 to 93.1. MPJ is going to be one of the next best wings of this coming decade and the Nuggets future is bright. My bold prediction is that the Nuggets will find themselves in the NBA finals within the next 5 years.

The last player that caught my attention is Gary Trent Jr. He is a perfect backup plan, in my opinion, if things go south for this team. The sky’s the limit for him and if Portland ends up cutting ties with CJ if another playoff run goes bad in the next two years, Dame can find himself another running mate in Gary Trent Jr. He went from 20 minutes a game all the way to 34.1, increasing his averages from 7.7PPG to 16.9, 0.9AST to 1.4AST and percentages went from 42.6FG% to 51.6 and 38.8 3% to 50.7. He went down in rebounds and free throw percentage, but the talent is there. I personally like Trent to be the change that Portland might need if the current backcourt they have cannot get it done, once again, within the next 2-3 years. If I’m Portland, I try to move CJ before it is too late and Dame wants out of there.

Gary Trent Jr. continues to show out for the Blazers in the bubble 😤 pic.twitter.com/GseRs0v1Os