Derek Holland Roughed Up on Saturday 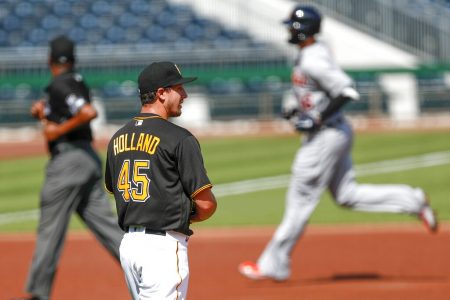 Derek Holland was obviously roughed up pretty bad on Saturday evening. He let nine total runs cross the plate; seven while he was on the hill.

The first inning was absolutely crazy. Holland gave up four home runs on his first 11 pitches. Something that has not been done since the 1974 Tigers. The home runs were by Niko Goodrum, Jonathan Schoop, Miguel Cabrera, CJ Cron, and Jeimer Candelario.

After the rough first inning, he looked good until the sixth where he was brought back in with 102 pitches already under his belt for the game. He gave up a solo home run to JaCoby Jones, then left two on for Nick Mears to handle in his MLB debut which he didn’t, allowing both runs to cross the plate. Mears never pitched higher than the AAA level at that point.

Mears had to face the horrific incident between first baseman Phillip Evans and right fielder Gregory Polanco as they collided in foul territory tracking down a pop ball. Evans was knocked out and stretchered off the field and luckily, Polanco was fine.

It’s probably the time for the Pirates either trade Holland or put him on the fake injured list. I hope neither is the case because he is a great piece to the rotation even after this rough outing. The Pirates gave Mitch Keller too many opportunities last year to prove that he was just average. Why not let Holland stay a while and show why he belongs instead of guys with bad attitudes and minimal experience?

The rotation has been all over the place this year with a lot of guest appearances. It’s hard to succeed with random starters on random days because it seems like teams with a profound five-game rotation do the best. Keep Holland in Pittsburgh and keep him in the rotation, simple.