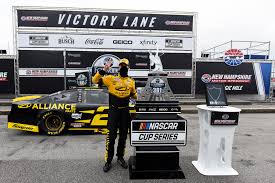 A little rain delay didn’t stop these cars from racing for 301 laps and looking back, we saw some passing and wrecking. The big two might as well have just become the big three now.

As talked about, Denny Hamlin was the only car that could compete with Brad throughout the race. Hamlin would win stage one, lead 92 laps and finish second in the 11 FedEx Express Toyota Camry for Joe Gibbs Racing. Martin Truex Jr did not lead a lap in this race, but still finished a solid third in the 19 Sports Clips Toyota.  The other two Gibbs cars packed it up early. Erik Jones had a penalty for pitting outside of his pit box early on which resulted in a one lap penalty. Jones did not recover and finished 24th in the 20 Toyota Dealers Toyota.  Defending champ Kyle Busch finished dead last, hitting the wall on lap 15 in the 18 Pedigree Toyota.

Hendrick Motorsports had serious speed early on, but once the laps were closing down, the cars started to fade.  Chase Elliott led nine laps and finished ninth in the 9 NAPA Auto Parts Chevrolet Camaro. William Byron extends his playoff spot by a few points with an 11th place finish in the 24 Liberty University Chevy. Jimmie Johnson had some contact from Clint Bowyer and spun out early on. Johnson would fight back to fifth, but fade and eventually finish 12th in the 48 Ally Camaro. Alex Bowman finished 15th in the 88 Chevygoods.com/Adam’s Polishes Camaro.

Austin Dillon led three laps and finished 13th in the 3 Freightliner Chevrolet Camaro for Richard Childress Racing. His teammate and rookie of the year contender Tyler Reddick fought with Jimmie Johnson for the 10th spot, but in the end, Reddick’s 8 Feeding America Camaro passed him and finished 10th.

The next two races will be a double header at Michigan International Speedway. The first is on a Saturday for the FireKeepers Casino 400, while we can look forward to the Consumers Energy 400 on Sunday. Both races will start at 4pm on NBCSN. This race will have no fans, unlike this race.