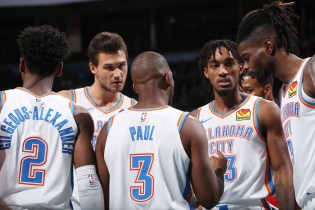 This past offseason, the Oklahoma City Thunder traded away their two best players in Russell Westbrook and Paul George. After the trade, no one thought the Thunder would be a playoff team despite bringing in Chris Paul, Danilo Gallinari, and Shai Gilgeous-Alexander. In fact, ESPN gave the Thunder a 0.2% chance of making the playoffs. It was hard to argue against them considering they just traded two MVP caliber players and in return, received an aging point guard, a solid shooting forward, and a young, unproven guard. Fast forward one year later and the Thunder are sitting at the 5th seed in the West only one game behind the Utah Jazz. The question is, how far can the Thunder go with a team of players in their first year together?

The Thunder have been the surprising team of the NBA and are one of the best offensive teams in the league. Chris Paul has been an amazing leader for the team and a great mentor for second year player Shai Gilgeous-Alexander, who has taken a massive step forward this season. Everybody on the team is committed to playing their role correctly and doing what they have to do in order to win. Young players like Terrance Fergouson, Hamidou Dialo, and Luguentz Dort have stepped up and played crucial roles in their team success. Dennis Schroder is a serious candidate to win 6th Man of the Year averaging 19 ppg and 4 apg off the bench. The Thunder have been playing amazing collectively, but is it enough to make some noise in the playoffs? It may be a stretch to say they are title contenders, but the return of defensive star Andre Roberson makes the Thunder a very scary matchup for any team.

It has been 30 months since Andre Roberson went down with a scary knee injury. He was a big part of past Thunder teams and they’ve missed him a lot the last few seasons. The wait is over for his return since he has been fully cleared to play again. He appeared in their scrimmage game against the Philadelphia 76ers and it looked like he never got hurt at all. Roberson has never been known for his shooting, in fact, he is known for lack of shooting ability. Against the 76ers, the game came down to the wire. They left Roberson open in the corner and he knocked the shot down to give the Thunder the lead. The following possession he was left open on the wing and again, Roberson knocked it down. The team getting back their best defender will be a huge help, but if he’s knocking down threes consistently, it makes them a threat.

The Western conference is stacked and it will be tough for the Thunder to go far, but bringing back Roberson puts them in the best possible position to make that run. Having a great backcourt with CP3 and Shai will make it tough for teams to matchup against. When you add great wings in Roberson and Gallinari, the inside presence of Steven Adams along with a great bench led by Schroder, you’re left with a very intriguing bunch. They’re young, they’re hungry and can be a very dangerous team if everything comes together for them. Don’t be surprised if they knock off a title favorite.