Denny Hamlin Gets Fifth Win of 2020 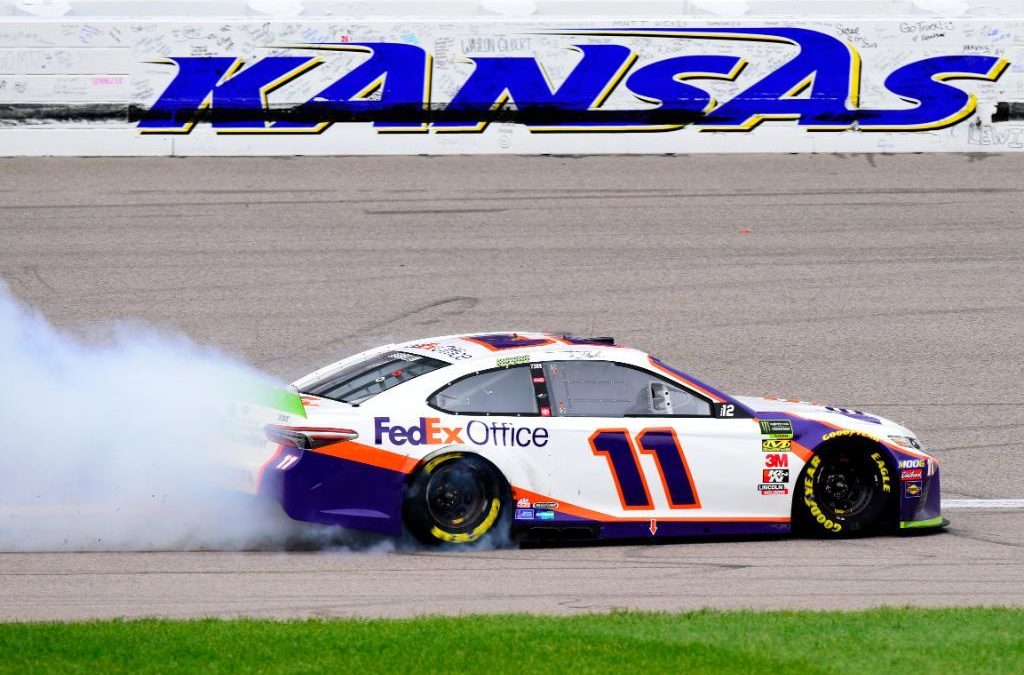 Before the Cup Series one week break, Kansas Speedway hosted a very exciting race on a Thursday Night.

Denny Hamlin won the Super Start Batteries 400 Presented By O’Reilly Auto Parts for Joe Gibbs Racing. Hamlin’s 11 FedEx Freight Toyota Camry led 52 laps, passed a struggling Kevin Harvick Ford, and had to hold off Brad Keselowski and teammate Martin Truex Jr for the win. This is Hamlin’s 42nd career win, his fifth of the season and his third at Kansas.

Two of his teammates finished in the top five. Martin Truex Jr led 44 laps and finished third in the 19 Auto Owner’s Insurance Toyota. Erik Jones needed a strong run to get back in playoff contention and he did exactly that. The 20 Reser’s Fine Foods Camry finished fifth and is now only 12 points behind William Byron in 16th. Kyle Busch was in line to grab his first stage win of the season after leading 52 laps, however, Busch would smack the wall hard later on, ending his chances of a win. Busch’s 18 M&Ms Fudge Brownies Toyota finished 11th and is still winless in 2020.

Brad Keselowski was the dominant car out of Team Penske as he led 30 laps and won stage two in the 2 Wabash Ford Mustang. He had the speed to catch up to Hamlin, but just fell a bit short. Ryan Blaney had a good car all night, but a cut tire ended his chance of a great finish. Blaney’s 12 DEX Imaging Mustang led 15 laps, finishing 20th. Joey Logano in the 22 Shell/Pennzoil Ford did lead 27 laps, but his night ended early after hitting the wall and eventually finished 35th.

Stewart Haas-Racing had a good performance with three of their four entries finishing in the top ten. Kevin Harvick said his car was not turnable, but still managed to lead nine laps and finish fourth in the 4 Busch Beer Apple Ford. Aric Almirola got his eighth top ten finish in a row ending up sixth in the 10 Smithfield Hometown Original Food Ford Mustang. Rookie and Kentucky winner, Cole Custer, finished behind Almirola in seventh in the 41 HaasTooling.com Ford. Clint Bowyer was the only car that finished outside the top ten in 14th in the 14 One Cure Mustang.

Hendrick Motorsports had one of their better overall races of the last few weeks. Alex Bowman battled near the front, led six laps and finished eighth in the 88 ChevyGoods.com/Adams Polishes Chevrolet Camaro. William Byron led for the most part, but a two tire strategy didn’t work as he was passed by the four tires of Hamlin, Keselowski and Harvick. The 24 Axalta Chevy led 27 laps and finished 10th, which is enough for Byron to earn the final spot in the playoffs, for now, at 16th. Chase Elliott finished 12th in the 9 NAPA Auto Parts Camaro and Jimmie Johnson once again got caught up in a wreck, finishing 32nd in the 48 Ally Chevy. Johnson fell all the way down to 19th in the standings and is now 18 points out of the playoffs.

The Cup Series will have a week off and return August 2nd at New Hampshire for the Foxwoods Resort Casino 301. Start time for the race is 3pm on NBCSN.