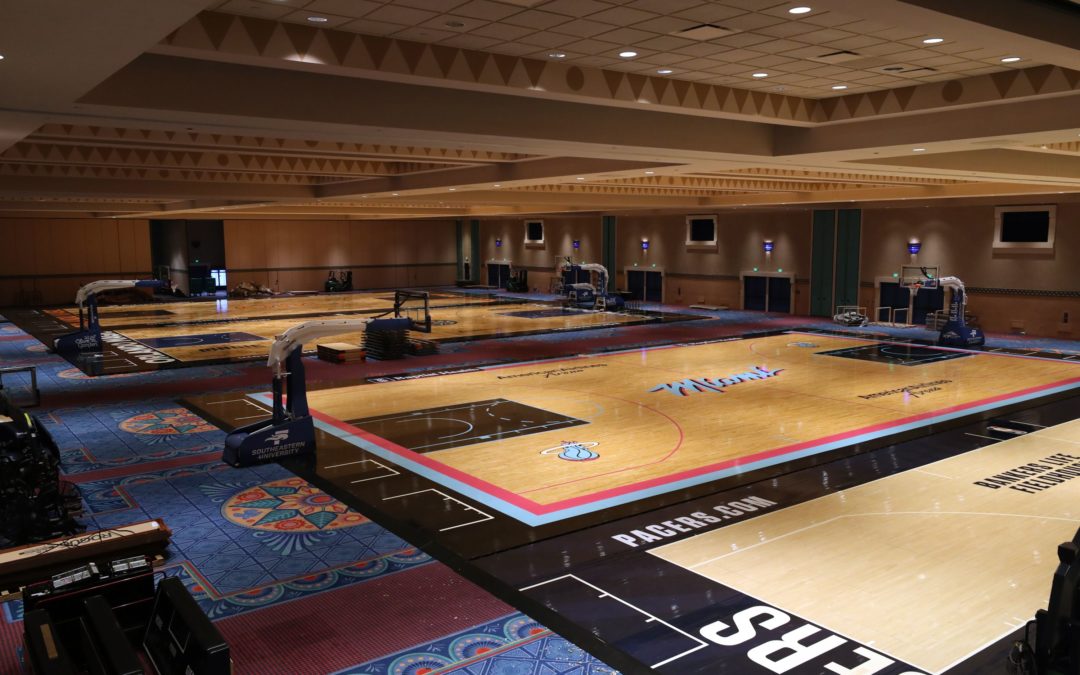 Ladies and gentlemen, the NBA is almost back. Exhibition games start in less than a week and the eight regular season games start shortly after that. With the NBA season gearing up again, it’s only right that we take a look at the 10 best players in the Orlando bubble.

Paul George sacrificed his stats this season after being paired with Kawhi Leonard in Los Angeles. It was clear that he was going to be the 2nd option to the reigning Finals MVP. Nonetheless, he is a superstar in his own right. In the 2018-19 season, George was a legitimate MVP candidate: Leading the league in steals and finishing 2nd in scoring behind James Harden. This season, he saw a decrease in numbers, but it shouldn’t take anything away from how he’s perceived as a player. He is more than capable of putting up those types of numbers, it’s just the situation that’s holding him back from another MVP type season. During the regular season, George was averaging 21 points per game on 43% from the field and 40% from three. I fully expect Paul George to shine in the NBA’s restart, considering the 6x All-Star has had 5 months to rest his constantly injured body.

Nikola Jokic has been the subject of many headlines leading up to the NBA’s restart in Orlando. More specifically, his incredible weight loss that occurred during the hiatus. Before the NBA season was suspended, Jokic was listed around 250 lbs. I think it’s safe to say he’s hovering around the 220 mark today. While he still has the height, he now lacks the physical body type of a true big man. As of now, it’s hard to say for certain how this will affect his dominance on the court, considering he was accustomed to using his size to create space down low. But nonetheless, Jokic is more of a finesse player anyways. He uses his soft touch and high basketball IQ to dominate the league. Jokic leads all centers in assists by a country mile and is averaging more assists per game than Chris Paul and De’Aaron Fox. We should see the best version of Nikola Jokic once the NBA starts back up.

It seems that many people have forgotten just how good Joel Embiid is. This might be due to the injury riddled season or the drama between himself and his co-star in Philadelphia, Ben Simmons. But don’t let the down year fool you, he is still the best center in the NBA. Coming into the season, he had MVP expectations. No, he wasn’t the favorite, but he was expected to put up numbers that would ascend him into the conversation. The drama filled season did take a toll on his stats, resulting in a decrease of points per game and rebounds per game. But as stated before numbers don’t tell the whole story. Embiid is probably the most gifted center in the league. Not only does he have the size and strength of a low-post force, he also has the shooting ability of the modern day stretch-big. On top of that, very few players are more dominant than Embiid when it comes to defending the paint. I think the 76ers will figure it out and Embiid will once again be looked at as the best center in basketball.

It’s safe to say Damian Lillard is one of the best players in the NBA, and he proves it every single year. This season, he ranks 5th in the league in points per game with 28.9, 6th in PER (Player Efficiency Rating) with 26.3 and 1st in three-point percentage among players who shoot 8 or more a game with 39%. The 5x All-Star finished 6th in MVP voting last season and has improved in almost all facets of his game. This season, Lillard is averaging career-highs in points per game, assists per game, field-goal percentage and three-point percentage while leading the league in minutes per game. The Trail Blazers might be 3 ½ games out from the playoffs, but if anyone can bring their team back from a deficit like that, it’s Damian Lillard.

Luka Doncic is having one of the best sophomore seasons in NBA history. He’s averaging 28.7 points per game, 9.3 rebounds and 8.7 assists. The only other player in NBA history to average these numbers in their 2nd season was Oscar Robertson in 1962, and he was playing 11 more minutes per game than Luka. Not to mention, Oscar was 23 years old at the time; Luka is 20. His skillset is already so versatile. He scores in bunches; He makes sure to get his teammates involved and he has a knack for grabbing boards. The only other player that possesses this type of skillset on a consistent level is LeBron James, and some consider him to be the best player in NBA history. Of course, Luka isn’t near the defender that LeBron is, but he still has a ton of time to develop into a better defensive player. With the workload Luka carries on the offensive end, he has little to no energy when it comes to the defensive end. In due time, he’ll be able to find a good balance, considering his running mate is a 7-foot, offensive juggernaut. I fully expect Luka to put up similar numbers in the NBA restart and I wouldn’t be surprised if the Dallas Mavericks shock some teams in the Playoffs.

James Harden is arguably the best scorer in the NBA. If Kevin Durant were healthy, I’d probably give the nod to him, but he’s not so you’d have to give that title to the Beard. James Harden is averaging 34.4 points per game while shooting 44% from the field and 35% from three. He’s also dishing out 7.4 assists per game and grabbing 6.4 rebounds per game. Harden’s skillset alone qualifies him as a top 5 player going into the bubble, but what really catches my eye is how well he’s meshed with his ball-dominant teammate, Russell Westbrook. Their pairing reminds me a lot of LeBron James and Dwyane Wade in Miami: Players who have similar styles and somehow find a way to make it work because they are just that good. Harden’s willingness to sacrifice the ball for his teammate and let Westbrook do his thing came as a surprise to me. It shows a lot of maturity on his part and I believe it will pay off big time in the bubble.

I’m a sucker for defense. A player’s defensive ability is just as important as their offensive ability, and that’s what separates Anthony Davis from the previous two players on this list. His offensive presence is very impressive, averaging 26.7 points per game on 51% shooting from the field and 34% from three; But his defensive dominance is what sets Davis apart. This season, the Lakers big man has a strong case to snag his first Defensive Player of the Year Award by averaging 2.4 blocks per game and 1.5 steals. After bringing that up, it doesn’t even sound right that Anthony Davis doesn’t have a DPOY award sitting in his trophy case yet. With a career average of 2.4 blocks per game, 1.4 steals and leading the league in blocks three times, it seems like highway robbery. Nonetheless, it doesn’t take away from his sheer dominance on that end of the floor. The Lakers are in prime position to take home the NBA championship, and a lot of that can be attributed to his effectiveness on both ends of the court.

The gap between Kawhi Leonard and Anthony Davis is considerably large. Before I go any further, this is not meant to be a slight toward Davis, but rather a compliment toward Leonard. Kawhi Leonard absolutely dominated the 2019 Playoffs and it carried over into this season. His ability to carry the majority of the offensive workload and still have the energy to be one of the best defenders in the NBA is absolutely incredible. Of course, it does help that his new teammate is also one of the best two-way players in the NBA. Even still, his offensive skill combined with his defensive skill is second to none. This season, Leonard is averaging 26.9 points per game, 7.3 rebounds and 5 assists while shooting 47% from the field and 37% from three. This is all while playing just 32 minutes a game. Kawhi Leonard is truly one of a kind and I would not be shocked if he shows the same dominance during this season’s Playoffs, like he did last season.

Giannis Antetokounmpo has done it all this season. He will likely win the MVP award and he has a strong case for winning the DPOY award. He won the MVP award last season, and yet he improved in almost every statistical category this season. Over the course of 57 games, Giannis averaged 29.6 points per game, 13.7 rebounds and 5.8 assists while shooting 55% from the field and 31% from three. His team holds the best record in the NBA at 53-12, contributing to his already elaborate MVP candidacy. He also has a great chance of winning DPOY, considering he ranks 1st in Defensive Rating, 1st in Defensive Win Shares and 1st in Defensive Box Plus/Minus. Giannis has also led the Bucks to the best Defensive Rating in the NBA. It’s hard to find another player that makes this big of an impact on his teams’ success. I fully expect the “Greek Freak” to finally break through the Eastern Conference and make his first NBA Finals appearance.

In year 17, at age 35, LeBron is still the best player in basketball. There is no disputing it. This season, he’s averaging 25.7 points per game, 7.9 rebounds per game and 10.6 assists per game while shooting 50% from the field and 35% from three. He played full-time point guard this season for the first time in his career and led the league in assists. That’s the thing with LeBron James. He picks and chooses what he wants to do on any given night. He could decide he’s in the mood to score one night and rack up 40 points, like he did against the Pelicans on February 25th. He could decide he’s in the mood to facilitate and dish out 19 assists, like he did on January 15th against the Magic. He is the ultimate weapon on the basketball court. He has led the Lakers to the best record in the West at 49-14 and they are currently the favorites to represent the Western Conference in the NBA Finals. “The King” will reign once again and bring the Lakers their 17th championship in franchise history.