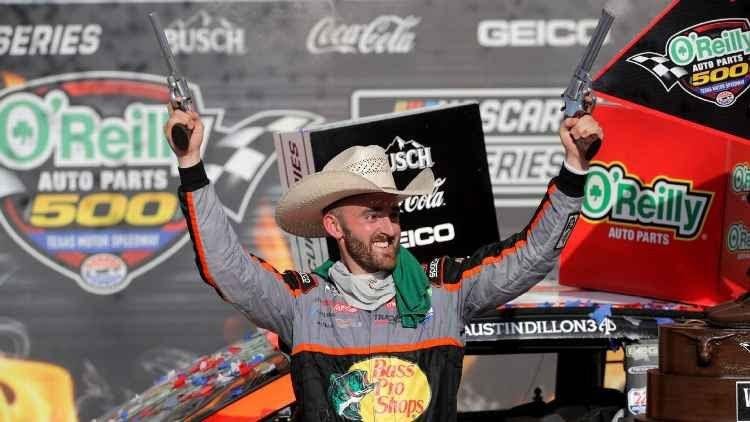 For the first time, the NASCAR Cup Series ran the 1.5 mile track of Texas Motor Speedway on a hot July date, and man, was this race a spicy one filled with strategy and wrecks. In the end, it was strategy that won the race.

Austin Dillon has won the O’reilly auto parts 500 for Richard Childress Racing.  Dillon took two tires on the last top while the rest of the field took four.  Dillons 3 Bass Pro Shops/Tracker Off Road Chevrolet Camaro led 22 laps and had to hold up past champions Joey Logano and Kyle Busch in the process.  This is Dillons third career win, his first win at Texas, his first win of 2020, and Richard Childress first win since 2018.  Dillon snapped an 88 race winless streak and locked himself into the playoffs.

His teammate and rookie of the year contender Tyler Reddick took no tires on the last stop, leading five laps and finishing second in the 8 Car Oil and Gas Camaro.  This is the first time that Richard Childress Racing had a one/two finishing since Talladega in 2011.

Joe Gibbs Racing has had their fastest cars of the year it seemed.  However, only two would finish in the top ten as two others were caught up in wrecks.  Series Champion Kyle Busch led 11 laps, escaped the big one around lap 220 and finished fourth in the 18 Interstate Batteries Toyota Camry.  Erik Jones needed a big day in order to get closer to the playoffs.  Jones 20 Craftsman Toyota led seven laps and finished sixth.  Defending Texas winner Denny Hamlin led 11 laps in the FedEx Office Camry, but spun out twice later on, finishing 20th.  Martin Truex Jr. also struggled late, being involved in the big one and would  finish 29th in the 19 Bass Pro Shops/Tracker Boats-ATVs Toyota with 15 laps led.

Kevin Harvick had a strong performance, leading 40 laps and finishing fifth in the 4 Mobil 1 Ford Mustang for Stewart-Haas Racing.  Pole Sitter Aric Almirola had brake troubles early which cost him a penalty on pit road, but still led the opening 35 laps in the 10 Smithfield Hometown Original Ford, finishing 10th.  Clint Bowyer finished behind in 11th in the 14 Rush Truck Centers Ford.  Last week’s winner and rookie Cole Custer was involved in the big one mid race and finished 39th in the 41 HaasTooling.com Ford.

Perhaps the worst luck came with Hendrick Motorsports as none of their four cars finished in the top ten.  Chase Elliott in the 9 NAPA Auto Parts Chevrolet Camaro was the highest finishing car in 12th.  Seven time champion and Texas Jimmie Johnson has a fast car, but smacked the wall hard, ending his chance of an eighth win at the track.  Alex Bowman was involved in a crash late as the 88 Adam’s Polishes/ChevyGoods.com Chevy finished 30th.  William Byron was involved in the late accident finishing 37th in the 24 Axalta Camaro.  That finish knocked him out of the playoffs with eight races to go.

The next race is the Super Start Batteries 400 Presented by O’Reilly Auto Parts at Kansas Speedway which is Thursday 7:30 on NBCSN.