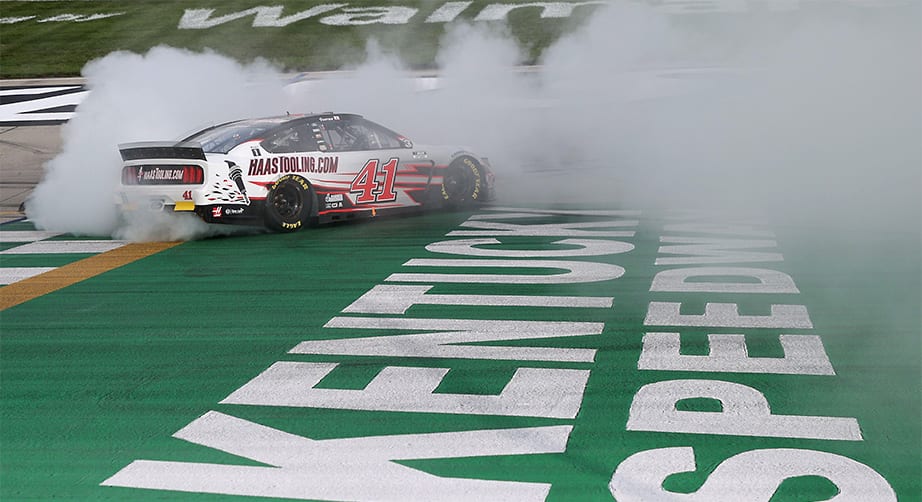 Every year, the NASCAR Cup Series heads to the bluegrass state of Kentucky. However, this was not the Kentucky we’re used to. The track conditions changed since they were racing in the daytime instead of the night temperature that they are used to. This year, no one expected this race to be an upset. Well, we were all wrong.

In a surprising last lap, rookie of the year contender, Cole Custer, won the Quaker State 400 at Kentucky Speedway for Stewart Haas-Racing. Custer, in the 41 Haastooling.com Ford Mustang, got a big shove from Ford Teammate Matt DiBenedetto going four wide to pass teammate Kevin Harvick, Martin Truex Jr and Ryan Blaney. Custer led five laps, earned a playoff berth, locked himself into the All-Star Race, and got his first Cup Series win. Fun fact: Custer is the first rookie to win a race since Chris Buescher in 2016 at Pocono.

Even though Kevin Harvick did not win, he still made a charge to the front after struggling early on. The 4 Hunt Brothers Pizza Mustang led 11 laps and it looked like he was going to get his first win at Kentucky. As previously stated, he lost the lead to teammate and eventual winner Cole Custer. Aric Almirola dominated stage one and led a good portion of stage two. The 10 Smithfield Vote For Bacon Ford led a race high 128 of 267 laps, but finished eighth. Clint Bowyer rounded out the SHR cars, finishing 14th in the 14 One Cure Ford.

The Joe Gibbs Racing Toyotas were quite average in today’s race. Two time Kentucky winner, Martin Truex Jr, was the highest finishing Gibbs car. He led 57 laps and finished second in the 19 Auto Owners Insurance Toyota Camry. Truex was one of the four cars battling for the win in the final laps. Denny Hamlin, who is tied for the points lead in the playoff picture, struggled, but came back to finish 12th in the 11 FedEx Freight Toyota. Another two time winner at Kentucky is defending champion Kyle Busch who drew the pole for the race and led nine laps in the 18 M&M’s Fudge Brownie Toyota. However, he struggled with a car that was “breaking” at one point, according to him. Busch is still winless in 2020. Erik Jones rounded up the Gibbs cars, finishing 22nd in the Built in Kentucky Camry.

Two of the three Team Penske cars finished in the top ten and were batting for the win. Ryan Blaney led 18 laps in the 12 Advance Auto Parts Ford Mustang. Blaney tried to use the low line in the four wide battle for the win, but was unable to make the pass. Brad Keselowski led 34 laps and won stage two in the 2 Snap-On Mustang. Keselowski had some frontal damage after spinning out Jimmie Johnson late in the race, and fell back to finish ninth. Joey Logano rounded out the cars, finishing 15th in the 22 Shell/Pennzoil Ford.

Hendrick Motorsports has cars in the top ten and hoped to get a win on owner Rick Hendrick’s birthday. However, all would finish outside that mark this time. William Byron had the most success, leading four laps and finished 11th in the 24 Axalta Chevrolet Camaro. Jimmie Johnson was cleared to race after missing last week due to a positive COVID-19 test. Johnson was one of the cars that could have contended for a win, but was spun out by Brad Keselowski as he tried to block in the closing laps of the race. The 48 Ally Chevy finished 18th. Alex Bowman, in the 88 Cincinnati Camaro, finished one spot below Johnson and Chase Elliott finished 23rd in the 9 Kelley Blue Book Chevy.

Matt DiBenedetto led a lap and finished third in the 21 Menards/Quaker State Ford Mustang for the Wood Brothers.

The next race is the All-Star race and Open at Bristol Motor Speedway. No points are on the line, but a big check is.