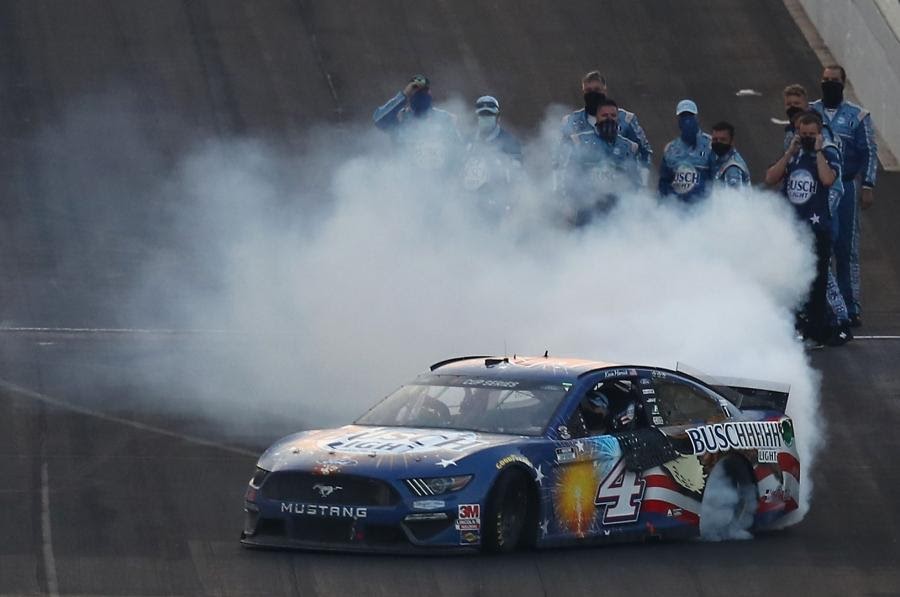 For Fourth of July weekend, the NASCAR Cup Series usually runs on Daytona where you see a lot of crashes and great finishes.  Today however, the Cup Series went to Indianapolis MotorSpeedway, where there were highs and lows with drivers and teams.

Kevin Harvick has repeated as the winner of the Big Machine Hand Sanitizer 400 Powered by Big Machine Records at the Brickyard.  Harvick continued his dominance of the 2020 season, getting his fourth win of the season, his third win at Indianapolis, 53rd win of his career.  He is now only one win away from tying Lee Petty for 11th on the all-time wins list. Harvick led 68 of 160 laps in the 4 Busch Light Ford Mustang for Stewart-Haas Racing and claimed stage two.

Three of his SHR Teammates finished in the top ten.  Aric Almirola finished third in the 10 Smithfield Ford, while rookie Cole Custer finished fifth in the 41 Haas/Fusion 360 Ford.  The only car not to finish in the top ten was Clint Bowyer who finished 16th in the 14 Rush Truck Centers/Cummins Ford.

Coming into this race, nobody expected Matt Kenseth to finish in the top five.  Well, most of the media’s predictions were wrong.  Kenseth led 12 laps and finished second in the 42 McDonald’s McDelivery Chevrolet Camaro for Chip Ganassi Racing.  Teammate Kurt Busch finished 13th in the 1 Monster Energy Chevy in his 700th career start in the Cup Series.

Hendrick Motorsports has a tough weekend.  The highest finishing car was Chase Elliott who led 26 laps and finished 11th in the 9 NAPA Auto Parts Chevy.  William Byron led 15 laps and claimed stage one, but a cut tire during the race ended his hopes of a Brickyard victory.  The 24 Liberty University Chevy finished 27th.  Alex Bowman has a struggling day, cutting a tire and hitting the outside wall very hard.  The 88 Adam’s Polishes/ChevyGoods.com Chevy placed 30th.  Justin Allgaier replaced seven time champion Jimmie Johnson as it was announced that Johnson tested positive for COVID-19.  Allgaier got damaged during the pit road accident as the 48 Ally Camaro finished 37th.

Ross Chastain led a lap in the 77 Melon Man Brand Chevrolet Camaro for Spire Motorsports.  With all the crashes, Chastain would finish an impressive 17th.

One of the best cars who looked as if he would win his first ever Brickyard race was Denny Hamlin, who led 19 laps, but while leading with six to go, he blew a right front tire, ending his brickyard hopes.  Hamlin finished 28th.  Erik Jones had the same problem, as the 20 Stanley Security Toyota blew a tire and hit the wall very hard, causing it to erupt in flames.  Luckily, Jones was ok, but he did finish 33rd, knocking him out of the final playoff spot.  Defending champion Kyle Busch led the team finishing fifth in the 18 America Mix Skittles Toyota Camry.  Martin Truex Jr. struggled from the drop of the green flag, as the 19 Auto-Owners Insurance Toyota blew an engine, finishing 38th.

The next race is the Quaker State 400 Presented by Walmart at Kentucky Speedway in which Kurt Busch looks to defend his Kentucky win from last year.