Are the Houston Dash the Favorite in the Challenge Cup? 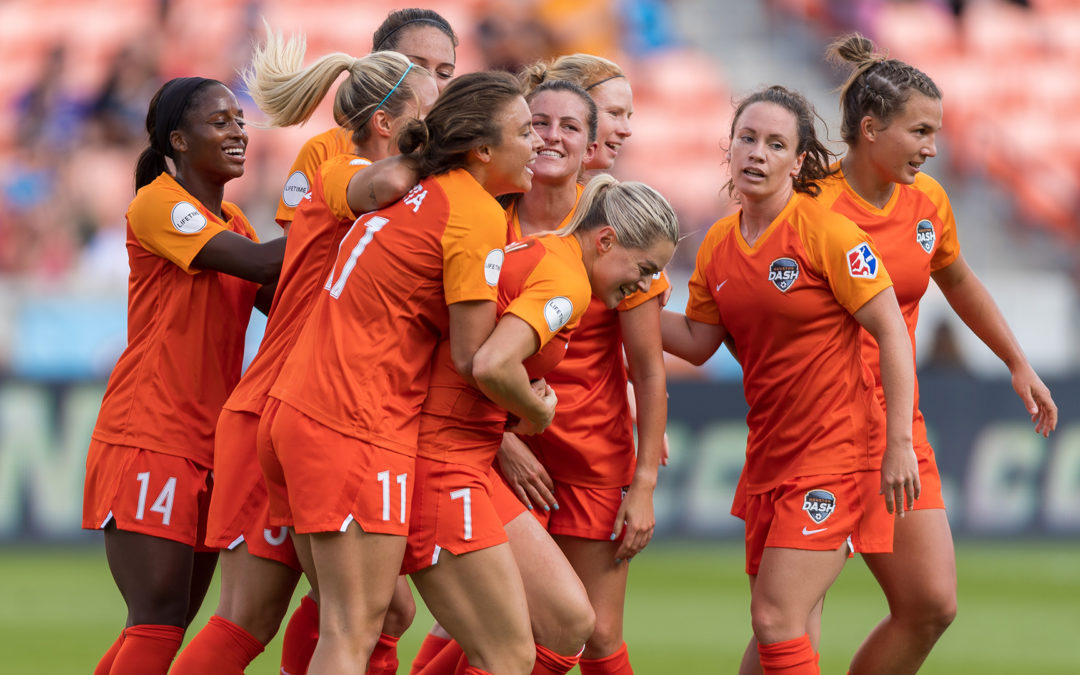 So since we last touched base I’ve become a Houston Dash fan. No one asked me to pick a team, but it was bound to happen. This is a tournament, I’m a competitive person, and eventually I was going to want a horse in this race. Sure I’m from Texas, but that’s only ever swayed me to be a Spurs fan. Is orange my color? Hell, no. Just ask me how much I hate the Tennessee Vols. Did I follow any of the players before now? I hate to say it, but no. Yet, within five minutes of their first game in the Challenge Cup against the Utah Royals, I was completely and totally awed.

Finishing seventh in the league last year, the Dash haven’t had a powerhouse reputation. The Houston Dash are actually the only team in the league without an allocated USWNT player. James Clarkson, head coach of the Dash, wants that to change, attracting not only national team players, but more international players as well. Except he doesn’t want to have a full team overhaul. He wants to build on the strong foundation he knows he has in Houston and give support to help the players they already have to reach the USWNT.

It’s clear in the Dash’s first game of the tournament against the Utah Royals that there is a new energy resonating throughout the team. They have a lot of the same offensive dominance I’d seen from the North Carolina Courage, defending back-to-back champions and favorites to win the tournament, but the Dash aren’t just assertive, every player seems to carry a new cooled, careful, confidence that fuels their movements.

First of all, this team has mad hops. I’m talking “Houston, we have lift off” kind of hops. Two of their five goals scored so far in the tournament have been off of fantastic jumping headers. In their first game of the Challenge Cup against the Utah Royals on June 30th Dash captain and English National team player, Rachel Daly scored on a jumping header off a cross from Kristie Mewis. Then in their next game against the OL Reign, Shea Groom came sprinting in and launched into the air to meet a high cross from Daly, heading it in for the second goal of the game.

However, I honestly think the strength of the Dash isn’t their amazing striking capabilities, it’s their worst kept secret, their star forward Rachel Daly. Everyone and their mother knows that Daly is “one of the best strikers in the league” as commentator Lori Lindsey said during pregame warmups on July 4th. She’s aggressive, opportunistic, and brimming with raw talent. She’s their Michael Jordan. It seems obvious then that the Dash should just form their offense around her and in a way they did, but not how you’d think.

See, think of MJ on the Bulls, driving down the paint, dunking over everyone, running scores up with his eyes closed. Of course every other team quickly formed their defenses around him. They had to try to control him as much as possible, which left players like Scotty Pippin and Steve Kerr, superstars in their own right, wide open to make baskets. Over the off season Houston has come to terms with the fact that every team is going to be swarming Daly, so they learned to use that to their advantage. They actually even use the same technique with all of their forwards.

I call it the “pay no attention to the man behind the curtain” strategy. It comes down to the Dash’s ability to draw their opposing teams out to the sides of the field. Often it’s Katie Stengel’s siren call as she speeds down the right side that turns the heads of the opposing team just enough to create space where the rest of Houston’s offense can set themselves up for a possible shot on goal and it works time and time again.

By harnessing the eagerness other teams have to put tight coverage on Daly and the other forwards, Houston’s midfielders are able to run up into the open pockets. It’s that firm press up into the 18 that have really let Kristie Mewis and Shea Groom shine. The key to this offensive strategy is being unpredictable, because the second teams start to spread out coverage again there’s Daly, who when given an inch will take a mile. So now even with just a little relaxation from the defenders, she can get off a shot on goal.

This is how the Houston Dash will make a good run at winning the 2020 Challenge Cup and possibly secure the club’s first championship. Their ability to stretch defenses thin, capitalize on their explosive energy, and willingness to take shots on goal paired with a tightened defense after allowing three goals from Utah in their first game, the Dash are looking competitive as ever.

Watching them play you wouldn’t know that many of the team’s players hadn’t met beyond video and phone calls until in person practices resumed on June 1. They have a seamless and easy bond that extends off the field. With their win over the OL Reign the Dash are tied for second in the tournament with four overall points just two points behind the North Carolina Courage. They’re having a good time and they’re kicking ass. I think they’re in it to win it. So, as their slogan goes, luv ya Dash!