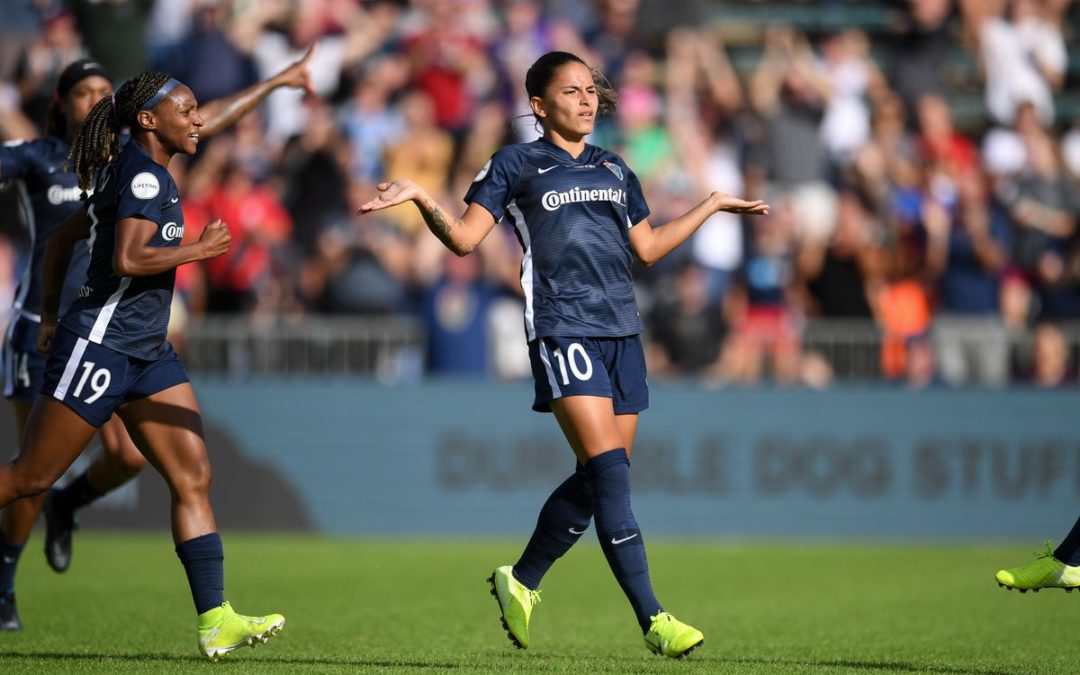 Just a little about me, since I’m new, I like to watch team hype videos in my free time. Sometimes it’s just one, but there have been times I watch them for an hour. Honestly, I’ve been grateful for that, because it’s gotten me through the sports lull that has been the past 100 plus days. I’ve missed sports so much and even though I’m now a die hard Bubba Wallace car 43 fan, NASCAR wasn’t giving me my team sport fix.

However, this morning was finally the day. Team sports were back in America. The National Women’s Soccer League (NWSL) made it’s season debut with a hype video for the 2020 Challenge Cup featuring many United States Women’s National Team (USWNT) players and a few other league stars talking about what coming back means after everything our country has been through. Needless to say the smile it put on my face didn’t fade for the next two and half hours.

I’d been eagerly anticipating the return of women’s soccer ever since the whisperings began a few months ago. Not only were sports going to be back soon, but it was going to be a women’s sport leading the way. Of course there were challenges along the way, most notably was the late withdrawal from the tournament of the Orlando Pride after a few players and staff members tested positive for COVID-19 just a week before the tournament was set to begin.

On top of all the challenges that came with playing sports in the middle of a pandemic, the pressures put on women’s sports, and the logistics of creating a tournament like this was the crescendoing of the Black Lives Matter movement that many of the league’s players had been very outspokenly supportive of. The overdue changing of the tides has been clear throughout our country, but watching the first two teams all take a knee in matching Black Lives Matters t-shirts as the National Anthem played and again in a moment of silence before the match was more than moving.

Echoing the stance Colin Kaepernick had taken years ago followed by the kneel of NWSL and USWNT star Megan Rapinoe, these players showed their support of the movement and once again showed the solidarity for an important issue in our country. It’s this proud, strong, certain outspokenness that drew me to these players originally. Sports are more than what takes place on the field, between whistles, beyond goals scored, and that’s what has been nagging at us to want them back these past few months.

This first game was especially exciting, because it featured back-to-back defending league champs the North Carolina Courage versus the Portland Thorns who also have two NWSL championships under their belt. Coming into the tournament it’s been said that North Carolina is the team to beat. With seven USWNT players on their team including Crystal Dunn and Samantha Mewis the Courage certainly have talent and experience built into their roster.

Through the first half there were no goals scored, but the possession time and shots on goal showed a dominance from North Carolina and one of their best strikers, Lynn Williams. All of these attempts also shined a light on the brick wall of goalie Portland had in six footer, Bella Bixby. In her watermelon colored uniform, her long frame was dominant in the goal as she deflected shot after shot. An all-league kicker for her high school’s varsity football team, Bixby also has an incredible ability to get the ball down field to her forwards with little effort. This was key in giving Portland a chance to reset themselves after each shot on goal from North Carolina.

At the 72nd minute Hailie Mace was subbed in and just three minutes later she got control of a long kick downfield just in time and was able to cross to Debinha who was up in the box. Mace saw Debinha was able to push the defenders back and lobbed the ball to her just in front of the goal where Debinha could glance it in. A goal that showed great sense of space from Mace and Debinha as they navigated the crowd of players, Mace putting the ball in the right place and Debinha pushing her way forward.

It was obvious this goal set a fire in Portland and the Thorns who asserted dominance over the ball and were quick to retaliate with a goal in the 79th minute from Simone Charley off an assist from Lindsey Horan to tie the game. This was a great rallying effort from Portland who had been playing on their heels for a lot of the match.

Tied 1-1 until the end of regulation, the match went into six minutes of stoppage time. It wasn’t until halfway through the fourth added minute that the Courage scored. Lynn Williams finally got a goal on a header off a cross from Mewis after taking countless shots on goal throughout the match. A few minutes later the whistle was blown and the North Carolina Courage celebrated their first victory of the tournament.

Initially I had been wary of what an empty stadium would be like to watch, but it didn’t really make a difference. They had put coverings over the stands with a different team’s logo over each section to mask the view of empty seats. The interviews were done from a distance, but weren’t awkward or stilted. Overall the match was exciting and fun and felt like an exhale after months without live sports.

There are a few things I’m interested to see throughout the tournament. The first is obviously the incredible performances that will come from the stunningly talented players in the NWSL. They are all so passionate and skilled and tournament style is so non-stop that it will definitely be entertaining to watch.

Along with the fun that can come in tournaments, there also isn’t a lot of rest. Of course, this setup was necessary to ensure as many games as possible with players in the bubble for the shortest amount of time possible, but it will be something to look out for to see how going from at home quarantine training with a little bit of camp to a full blown tournament will affect play.

This game was the perfect kickoff to sports’ return. These women deserve the spotlight they are being given right now and I have no doubts they will show up and show out. Already in the second game of the tournament USWNT player Rose Lavelle was a complete beast and took no prisoners as she led her Washington Spirit team to a victory. I’m pumped for a whole month packed with performances like that.