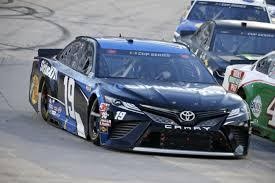 From making a decision to remove the iconic and controversial confederate flag, to the first even night race at Martinsville, tonight was the night for NASCAR to finish the job right. In short terms, they did exactly that with great racing.

Martin Truex Jr has won the Blue-Emu Maximum Pain Relief 500 for Joe Gibbs Racing.  Truex would fight back from nearly going a lap down, to leading 132 laps in the 19 Sirius XM Toyota Camry.  This is Truex’s second win at Martinsville, and his 27th NASCAR Cup Series victory.  With this win, Truex has punched his ticket to the NASCAR Playoffsl

While Truex redeemed from early damage, his teammates were absent throughout the night.  Kyle Busch couldn’t get back on the lead lap after getting some damage and finished 19th in the 18 M&M’s Fudge Brownie Camry.  Erik Jones’ struggles continued as he finished 20th in the 20 Genuine Parts Toyota.  Denny Hamlin fell back early but was unable to get a lap back as Corey LaJoie passed him for the lucky dog.  The 11 FedEx Freight Camry finished 24th.

Team Penske had a strong race as all three of their cars finished second, third and fourth.  Ryan Blaney led 34 laps and finished second in the 12 Menards/Cardell Cabinetry Ford Mustang.  Brad Keselowski meanwhile led five laps while finishing third in the 2 PPG Mustang.  Finally, Joey Logano would win stage one, lead a race high 234 laps and finish fourth in the 22 Shell Pennzoil Ford.

As always at Martinsville, one of the teams to really look out for is Hendrick Motorsports with their history at the track.  Chase Elliott would only lead one lap but finish fifth in the 9 NAPA Auto Parts Chevrolet Camaro, and Alex Bowman finished sixth in the 88 ChevyGoods.com/Adam’s Polishes Camaro.  William Byron had problems early on in the race, but bounced back later on to finish eighth in the 24 Axalta Chevy.  Perhaps the strongest Hendrick car was Jimmie Johnson, who won stage two and led 70 laps in the 48 Ally Chevy.  However, Johnson would fade later on and finish 10th.

Corey LaJoie brought back his face on the hood of the car again, which is why he may have had a good car all night.  The 32 Keen Parts Ford Mustang for Go Fas Racing stayed out and led five laps when everyone else pitted.  LaJoie finished 18th.

Bubba Wallace took two tires and had the lead for a bit before the end of stage one.  The 43 Black Lives Matter Chevy for Richard Petty Motorsports finished 11th, his best short track finish.  Bubba Wallace was the one who wanted the flag out of NASCAR, and he won the battle.

Other athletes would show their support for Bubba Wallace and NASCAR.  Two of them consist of New Orleans Saints running back Alvin Kamara, and Los Angeles Lakers very own LeBron James.

The next race is at Homestead Miami Speedway for the Dixie Vodka 400 where Kyle Busch looks to win during the summer at Homestead the same way he did in the fall.