Harvick Continues his Dominance, Wins at Atlanta for Third Time 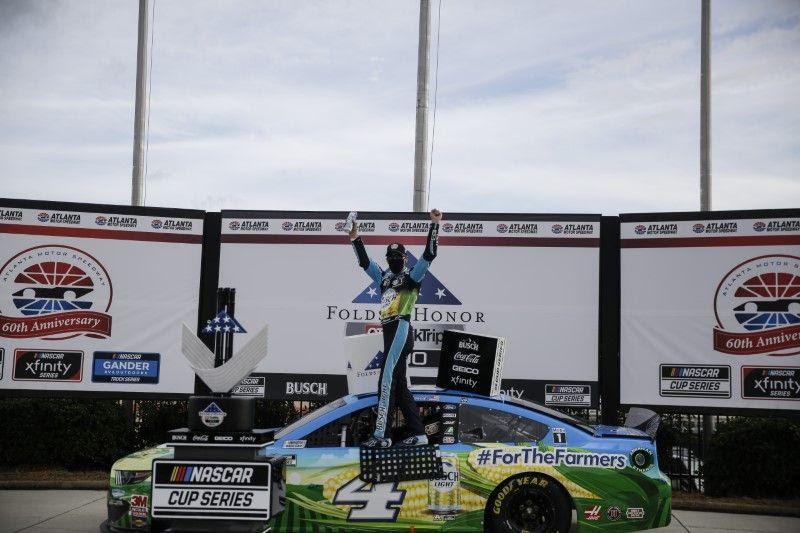 NASCAR may still be without fans, but that does not mean there was not a good show at Atlanta Motor Speedway, a track that has had history, a track that has been known for some great finishes in the past, and a track where redemption and tributes are made.

Kevin Harvick has won the Folds of Honor QuikTrip 509 at Atlanta Motorspeedway for Stewart-Haas Racing.  The 4 Busch Light For The Farmers Ford Mustang led a race high 151 laps.  This is Harvick’s second win of the season, his third at Atlanta Motor Speedway and his 51st Cup Series victory.  While Harvick finished in the top five, the rest either struggled or ran into trouble.  Aric Almirola finished 17th in the 10 Smithfield Mustang, and Rookie Cole Custer finished 19th in the 41 HaasTooling.com Ford.  Clint Bowyer was a favorite to win and led 58 laps.  However, a tire issue near the end cost him a top ten finish.  Bowyer finished 20th in the 14 Busch Light For The Farmers Ford.

Joe Gibbs Racing had strong Toyotas all day long, but they just could not finish the job.  Kyle Busch led seven laps and finished second in the 18 M&M’s Fudge Brownie Toyota Camry.  Martin Truex Jr would lead 65 laps, sweep both stage one and two while finishing third in the 19 Auto Owners Insurance Camry.  Denny Hamlin did not leap a lap but was in the top ten for most of the day.  The 11 FedEx #SupportSmall Toyota finished fifth.  Erik Jones was in the top ten, but car troubles had the 20 STANLEY Toyota finish 28th.

Hendrick Motorsports was either having a great day, or a day in which they would like to Forget about.  Five time Atlanta winner Jimmie Johnson gave the command before the race and finished seventh in the 48 Ally Chevrolet Camaro.  However, Jimmie missed the chance to draw for Wednesday’s race at Martinsville as he just missed being in the top 12 in points.  Pole Sitter Chase Elliott led 26 laps and finished eighth in the 9 NAPA Auto Parts Camaro.  Alex Bowman was silent throughout the day, never really contending.  The 88 Axalta Chevy finished 12th.  William Byron Started 20th, but hit the wall during the early parts of the race and never recovered from the damage.  The 24 Liberty University Camaro finished 33rd.

Kurt Busch had a very eventful day as the The 1 Monster Energy Chevrolet Camaro ZL1 1LE for Chip Ganassi Racing failed pre-race inspection three times, and was sent to the rear of the field for the start. Busch then had to serve a pass through penalty for the infraction before the green flag dropped.  However, Busch would rally to lead a lap, and finish sixth after a weird day in his eye. His teammate, Matt Kenseth, finished 15th in the 42 Credit One Bank Camaro.

There were a number of tributes and a scare during the day as well.  First, before the drop of the green flag, NASCAR Halted the field while President Steve Phelps delivered a message to the teams and fans watching at home on how the sports will work with racial equality ever since the death of George Flyod.  After the race, Kevin Harvick would go around the track paying tribute to Dale Earnheardt Sr.  Just like he did when he beat Jeff Gordon by inches during the 2001 race.

Finally, there was a scary moment when Richard Petty Motorsports driver Bubba Wallace who finished 21st in the 43 McDonald’s Chevy, passed out while getting interviewed by FOX Sports Reporter Jamie Little.  Luckily, Wallace was alerted and is now ok.

The next race is the Blue EMU Maximum Pain Relief 500 at Martinsville Speedway, where Brad Keselowski looksto defend his victory from last season.  The race is scheduled for Wednesday night at 7pm on FOX Sports One.