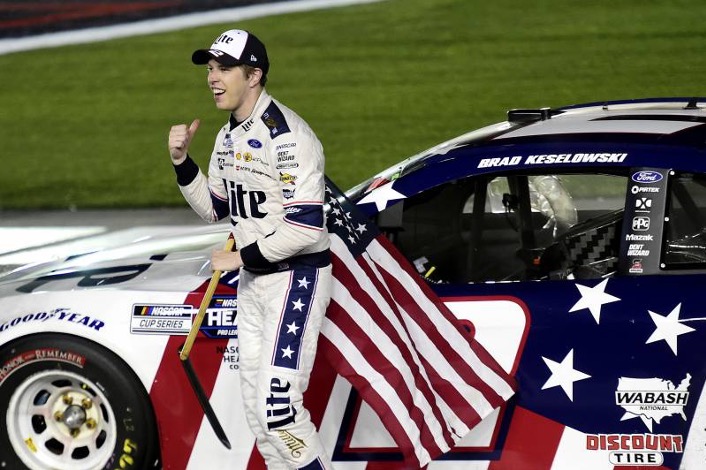 Every Memorial Day weekend, there would be the Indy 500 and then the Coca-Cola 600.  This time, it was only the Coke 600 without fans.  However, that did not stop a race that ended dramatically.

Brad Keselowski has won the Coca-Cola 600 at Charlotte Motorspeedway.  The 2 Miller Lite Patriotic Ford Mustang played strategy late in the race to secure the crown jewel.  This is Keselowski’s first win of the season, his first Coke 600 victory, his second win at Charlotte and the 31st of his career.  Keselowski led 21 laps and is now locked into the NASCAR Playoffs.

The other two Penske Fords were powerful as well.  Ryan Blaney finished third in the 12 DEX Imaging Mustang.  Joey Logano had a good race leading 26 laps and won stage three.  However, the 22 22 Shell/Pennzoil Ford has a penalty on pit road.  Logano would come back to finish 13th.

Hendrick Motorsports went from having a great race to being cursed as fans call it.  Chase Elliott led 38 laps in the 9 NAPA Auto Parts Chevrolet Camaro.  However with two laps to go, his teammate William Byron spun out and finished 20th in the 24 Liberty University Patriotic Camaro.  Meanwhile Elliott would lose the lead after pitting and finish originally third until a penalty moved him up to second.  Alex Bowman would win the first two stages in the 88 NOCO/ChevyGoods.com Chevy led a race-high 164 of 405 laps and swept the stages.  However, Bowman faded and finished 19th.  Jimmie Johnson had a strong car throughout the night and originally finished second in the 48 Ally Patriotic Camaro.  However, the car failed post-race inspection and was disqualified.  Johnson finished 40th.

Kyle Busch finished fourth in the 18 M&M’s/USO Toyota Camry for Joe Gibbs Racing.  Martin Truex Jr however was the dominant Joe Gibbs Racing car throughout the night.  The 19 Bass Pro Shops/USO/Tracker ATVs/Boats Toyota would pass Alex Bowman and lead 87 laps.  Truex would also pit with Chase Elliott and finish sixth.  Erik Jones finished 11th in the 20 DeWalt/Atomic Compact Series Camry.  The final car was Denny Hamlin who had problems not even before the green flag dropped.  The 11 FedEx Toyota lost the weights within the side rails of the Camry.  He was not able to maintain NASCAR speed and had to come down to fix it.  Hamlin finished 29th with penalties given out to the team including a four race suspension of crew chief Chris Gabehart.

Pole Sitter Kurt Busch in the 1 Gearwrench Chevy for Chip Ganassi Racing led the first 54 laps before a small rain delay hit.  He would come back to finish seventh while teammate Matt Kenseth hit the walk early and finished 26th in the 42 McDonald’s McDelivery Camaro.

Matt DiBenedetto stayed out of our road as the leaders went in. The 21 FVP/Menards Ford for Wood Brothers Racing led six laps but fell back due to the fast cars.  DiBenedetto finished 17th.

The next race is back at Charlotte for the Alsco Uniforms 500 where some look to bounce back from problems.