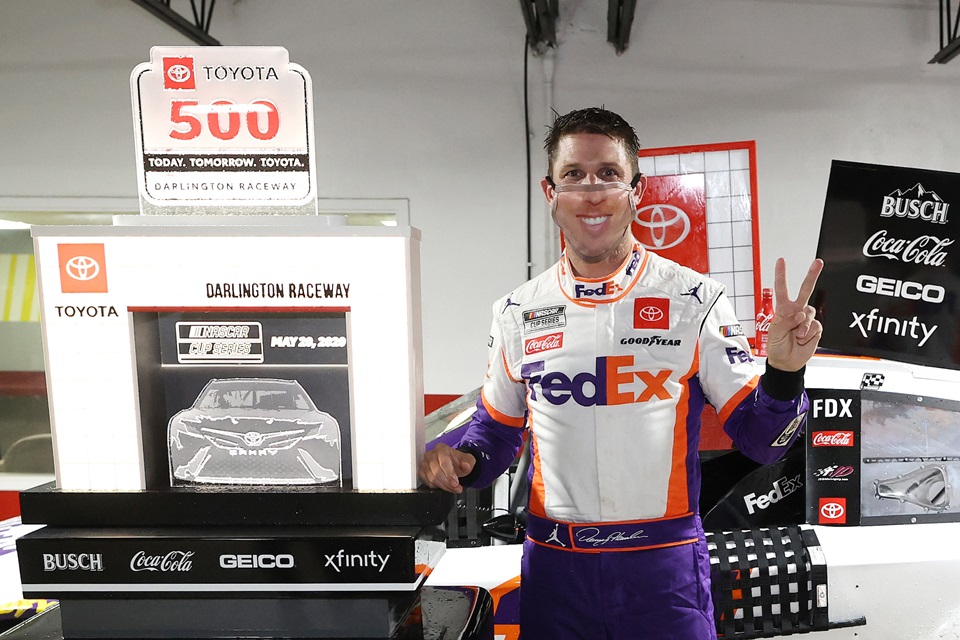 At first, it looked like Mother Nature would fill the lady in black with nothing but tears.  However, the tears went away and NASCAR went back to Darlington in what was a race that had lead changes, sparks and tempers in the end.

Denny Hamlin has won the Toyota 500 at Darlington Raceway.  The 11 FedEx Delivering Strength Toyota Camry for Joe Gibbs Racing led 12 laps and Hamlin, with his smile mask got his second win of the season in the rain shortened race.  This time, there were no worries.  The rest of Hamlin’s teammates finished in the top ten.  Kyle Busch battled an early struggling racecar to finish second in the 18 M&M’s Fudge Brownie Toyota.  Kyle Busch did not leave the race happy as he unintentionally spun out the 9 of Chase Elliott.  Busch would have a conversation with his former crew chief Alan Gustafson.  2019 Southern 500 winner Erik Jones led 27 laps, finishing fifth in the 20 STANLEY Toyota, finishing fifth.  Martin Truex Jr led 16 laps and finished 10th in the 19 Bass Pro Shops Tracker Boats/ATV Camry.

Few Hendrick Motorsport drivers were in the top 10 earlier, but fell off the map.  The highest finisher was Jimmie Johnson who bounced back after his wreck on Sunday.  The 48 Ally Chevrolet Camaro was silent throughout the night, riding in the top 20.  Johnson would end up finishing eighth, a great bounce back performance. William Byron was another one who faded after stage one.  Byron’s 24 Axalta camaro did not lead a lap, finishing 12th. Alex Bowman finished 18th in the 88 NOCO/ChevyGoods.com Camaro.  Chase Elliott was a contender until he and Kyle Busch  got together, wrecking Elliott.  He ended up showing his displeasure to Busch by giving him the one finger salute. The 9 NAPA Auto Parts camaro led 28 laps but finished 38th.

Stewart-Haas Racing was just as good as they were during Sunday’s race.  However, while one was dominant and won Sunday, one was dominant and wrecked.  Kevin Harvick looked to go back to back at darlington, but this time just came up short.  The 4 Mobil1 Ford Mustang led 10 laps and finished third.  Aric Almirola finished seventh in the 10 Smithfield/ Feeding America #GoodFoodChallenge Ford.  Clint Bowyer was looking for his first win since Michigan of 2018 and it seemed as if he would break that winless streak.  Bowyer would lead 71 laps and sweep the first two stages.  However, the 14 Rush/Mobil Delvac 1 Mustang finished 22nd.  Rookie Cole Custer hit the wall later on and finished 31st in the 41 HaasTooling.com Ford Mustang.

Ryan Newman continues to impress even after his horrific crash at Daytona.  Newman led five laps while playing strategy.  The 6 Oscar Mayer Hot Dogs Ford for Roush-Fenway Racing finished 14th.  His teammate Chris Buescher spun out early on, but came back to finish 23rd in the 17 Fifth-Third Bank Ford.

Second year Cup driver Ryan Preece was the pole sitter and was in the top ten throughout the night.  However. engine troubles had the 37 Tide Power Pods Chevrolet Camaro finish dead last in 39th.  His teammate Ricky Stenhouse Jr did not wreck on the first lap, but ended up wrecking again.  The 47 Kroger Camaro finished 25th.

Ty Dillon started second and led eight laps in the 13 GEICO Hump Day Chevy for Germain Racing.  However, the more funded and powerful cars charged toward him and ended up passing him.  Dillon would finish 19th.

The next race is the Coca-Cola 600 at Charlotte Motor Speedway where Martin Truex Jr looks to defend his win.