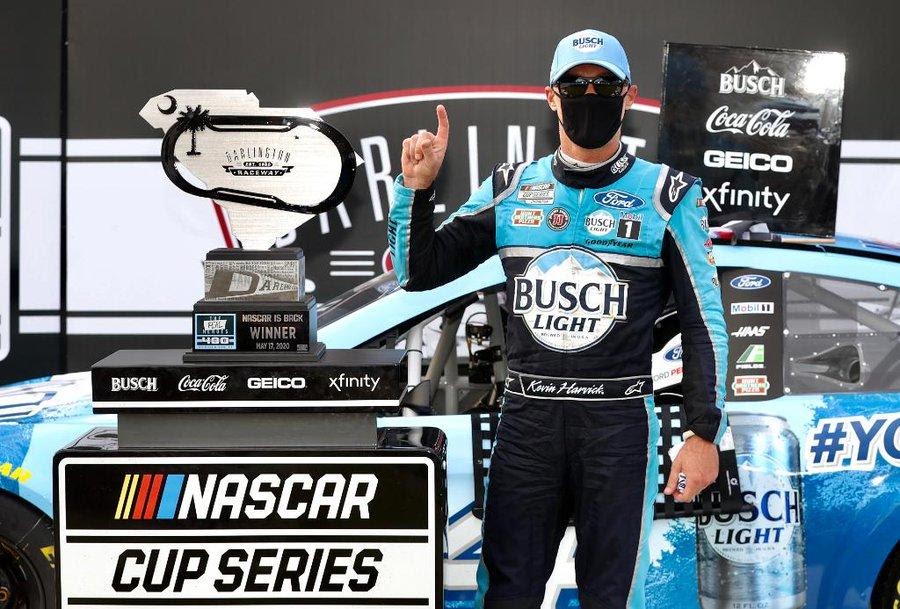 It has been nearly two months since we last had some big sporting events. This was for the teams, drivers, and all fans of sports. Thus having NASCAR return as one of the sports that was suspended due to the COVID-19 pandemic. There would be no fans allowed but people were still able to catch the action at home.

Kevin Harvick has won NASCAR’S return in The Real Heroes 400 at Darlington Raceway. The Busch Light #YOURFACEHERE Ford Mustang for Stewart-Haas Racing led 159 out of the 293 laps and got the teams first win of 2020. Harvick also became the 14th driver to win at least 50 races in the Cup Series.

For his teammates meanwhile, it was a mediocre return. Aric Almirola finished 12th in the 10 Smithfield Ford. Clint Bowyer in the 14 Rush Trucking/Mobil 1 Ford had some debris on his splitter while finishing 17th and rookie Cole Custer finished 22nd in the 41 Haas Tooling.com Mustang.

Hendrick Motorsports had dominant cars all day. Unfortunately, only two were able to finish in the top five. Alex Bowman led 41 laps in the 88 ChevyGoods.com NOCO Chevrolet Camaro finishing second. Chase Elliott was silent throughout the day running in the top 15 area. The 9 NAPA Auto Parts Chevy finished fourth. William Byron won stage one early on the leading three laps. However, the 24 Axalta Chevrolet blew a tire causing him to spin out. Byron finished in 35th. Jimmie Johnson was about to win stage one, that is until the 48 Ally Camaro made contact with the soon to be lapped car of Chris Buescher. Johnson spun and hit the inside wall. Jimmie would lead nine laps, but finished 38th.

Joe Gibbs Racing went from being absent to the first half of the race to having three cars finish in the top ten. Denny Hamlin finished fifth in the 11 FedEx Toyota Camry and Martin Truex Jr bounced back from a possible loose wheel to finish sixth in the 19 Bass Pro Shops/Tracker Boats/ATVs Toyota. Last fall’s winner Erik Jones finished eighth in the 20 DeWalt/Atomic Compact Series Camry. Defending series champion Kyle Busch failed pre race inspection twice and had to start in the back. Later on he moved into the top 10, but unfortunately, the 18 Patriotic M&M’s Toyota had a loose wheel. Busch finished 26th.

As we know Chip Ganassi Racing hired Matt Kenseth to drive the 42. In his first start since Homestead in 2018, the 42 Credit One Bank Camaro finished 10th. Teammate Kurt Busch finished third in the 1 Monster Energy Chevy.

Ryan Newman was another big story, making a comeback after a horrific crash at the end of the Daytona 500.  Newman was in the top 15 and even the top 10 for some of the day. The 6 Oscar Mayer #FrontYardCookout Ford finished 15th. His Roush Fenway teammate Chris Buescher finished 32nd in the 17 Fastenal Ford.

Brad Keselowski won the pole via a blind draw and led 80 laps in the 2 Discount Tire Ford for Team Penske and won stage two. However, he finished outside of the top ten in 13th. Ryan Blaney finished 16th in the 12 Duracell Optimum/Menards Mustang and Joey Logano finished 18th in the 22 Shell/Pennzoil Ford.

The next race is the Toyota 500 at Darlington Raceway with the start time being at 7:30 on FS1.