History of the 30 AOL Car for Richard Childress, and its Downfall 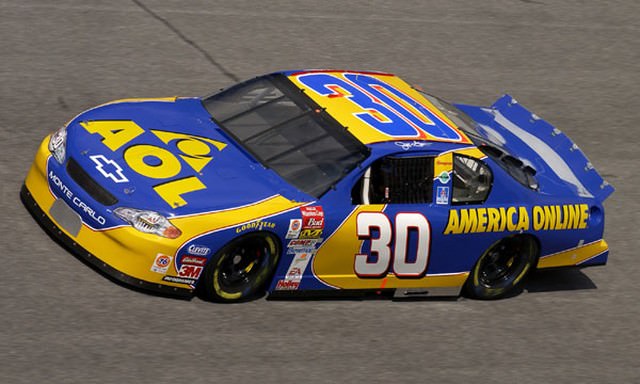 In the early 2000s, Richard Childress Racing was on top of their game.  Despite them having a major drawback due to the tragic death of Dale Earnhardt Sr.  The team would still be a contenting team and race for Dale.

Kevin Harvick was a young gun taking over the rebranded 29 Goodwrench Chevrolet Monte Carlo and Robby Gordon ended up winning three races during his time at RCR in the 31 Chevrolet Monte Carlo.  However, one car had numerous drivers in the early 2000s that saw this team not even win once.

That team was none other than the 30 American Online Chevrolet Monte Carlo.  Originally, Kevin Harvick was going to drive the 30 car for a select number of races in 2001.  After Dale’s death, Harvick was moved up and Jeff Green took over the 30 car.  Green at the time was a consistent Busch series driver so many thought that he could be the next big thing.

However, that was not the case and he flopped in the 30 car.  His 2002 season was not that bad as he finished second at New Hampshire to award Burton which gave the sponsor AOL some life of staying in NASCAR, and Green.  In his first full time season, he had four top fives, six top tens and finished 17th in the point standings.

Coming into 2003, Many thought Green could break out and finish in the top ten in points.  It seemed to be going well.  He won the pole for the 2003 Daytona 500, and a seventh place finish at Texas.  Besides that, his only other best finishes were a 19th and 20th at Darlington and Bristol.  After a run in at Richmond with teammate Kevin Harvick Green said the following “we’re supposed to be teammates but I guess there is only one car at RCR.”

After that quote, Green was released and went to go run for Dale Earnhardt Incorporated and then Petty Enterprises.  Steve Park who was struggling with DEI came over for a fresh start in the AOL ride.

Park would however only have one top five and two top tens, even failing to qualify at Talladega.  Parks best finish was a fifth at Michigan.  He did not come back for another season with RCR and instead focused on the truck series.

With AOL already having some legal troubles and the struggle of the 30 team, RCR decided to promote then Busch series driver Johnny Sauter to the Cup Series full time.  The goal was to have Sauter become the next Kevin Harvick by coming up to the series early and winning races.

Sauter has two wins, finished eighth in the 2003 standings and led the 21 car to the owners championship.  He also made a few starts in the Cup for Morgan-McClure Motorsports.

Not only that, but they paired Sauter together with Kevin Hamlin who won two races with Robby Gordon in 2003.   So was Sauter able to finally get that 30 car in victory lane or have a great rookie season?

Well, the answer is a big no.  Sauter was at the bottom of the rookie of the year standings, and was 28th in the points.  He only had five top 20 finishes with his best being a 14th at Rockingham and Talladega.

Following the Dover race, he was released and Dave Blaney took over the 30 ride.  Richard Childress told gadsdentimes that “This sport has gotten so tough and complicated, sometimes tough decisions have to be made.”

Blaney had two top 20 finishes, those being back to back 15th place finishes at Michigan and Daytona.  After a 24th at Watkins Glen, Blaney would be replaced by Jeff Burton who ended his long nine year relationship with Roush Fenway Racing.  Burton drove the 99 Ford with limited sponsorship and was eventually driving it unsponsored.

Burton would get the team’s best performance in the second half of the season.  He had 11 top 20s one top five (fourth at Bristol in the fall) and three top tens.  The other top tens he got were at Charlotte and Atlanta.

However, it was not enough to save the sponsorship.  Richard Clidress tried you sign American Online to an extension, but it didn’t pull through.  AOL instead said that it wasn’t working out for their marketing scheme.

After AOL left NASCAR, the 30 car was rebranded to the 07 Jack Daniels Chevrolet.  Childress brought Dave Blaney back for the 2005 season, but was replaced by Clint Bowyer who would win in RCRs third car team in 2007 at New Hampshire, which was also the first race of the Chase.

The car was then rebranded to the 33 Chevy, in which Bowyer drove until the end of the 2011 season.

Meanwhile, AOL had some legal troubles, a bad merger with Time Warner and much better internet speed and websites led to the site’s downfall.  Also in 2003, they were sued by the Ohio Attorney General for what was claimed to be improper billing practices.

The 30 and 07 car is still in the Cup Series as the 8 Chevrolet Camaro driven by rookie Tyler Reddick.