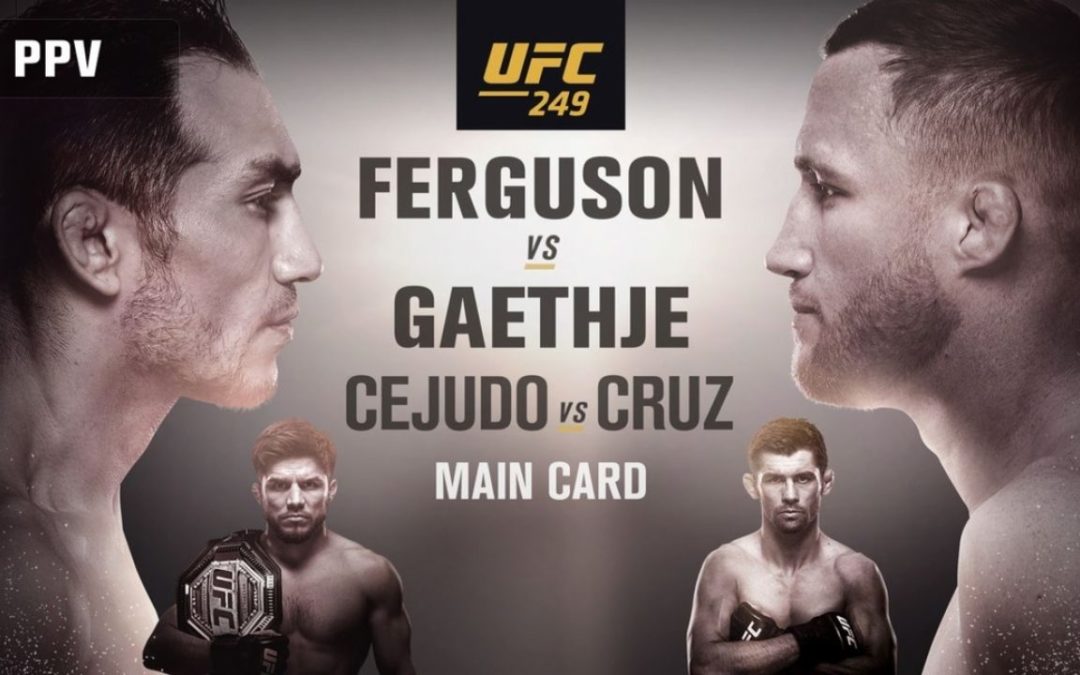 It will feel good to have some normalcy. UFC 249 takes place on Saturday, May 9th. This card has been canceled twice in the last 3 months. This was due to the capriciousness of the pandemic, and the lack of states and cities that would allow such a sporting event to happen.

Dana White has been hard-pressed to make this event happen. It was a very bumpy road to arrive at this point for Dana. He has been scrutinized for him even trying to make this event during a pandemic, and putting fighters and other personnel at risk to become infected with COVID-19.

Nevertheless, once Dana White sets his sight on a target he finds a way to make things happen. This became very clear when Dana said he had purchased an island to host international fights in. He plans on opening this venue by mid to late June. Remember it was not that long ago Dana moved an entire event (UFC 232) from Nevada to California in a weeks’ notice. This was because Jon Jones was not cleared by the Nevada State Athletic Commission due to an abnormality in one of Jones’s drug tests.

All the turmoil Dana White faced to get to this point, makes this that much sweeter for him I’m sure. Now let’s begin with the preview on the fights.

To kick off the main card we have a heavyweight bout against two heavy hitters trying to make waves. The always hated Greg Hardy, whose last fight was against heavyweight contender Alexander Volkov. He lost via decision to Volkov but considering that Hardy was a late replacement for that fight, and the huge step-up in the level of competition, Hardy showed that he may be ready to be considered a top 10 heavyweight. Fighting against the Prince of War is Cape Verde born Yorgan De Castro. Castro UFC debut came during UFC 243. He opened that card as well, where he scored a vicious 1st rd KO. Castro has dangerous power in those hands, he scored the KO moving backward. Do not expect this fight to last all 3 rounds.

Both of these featherweight contenders are coming off losses. No matter how I feel about Calvin Kattar’s 3 round main event loss to Zhabit Magomedsharipov, the fight was a loss on his record. Both of these fighters like to throw hands. Kattar’s last 3 wins came via KO. Stephen’s last 2 wins came via KO and has a total of 19 wins via KO. Both fighters need to gain momentum again to compete for a title. Regardless of who wins, it will be considered a strong win for two top 10 fighters.

This fight is for the unofficial interim heavyweight title. We cannot talk about this fight without talking about RAW POWER! Both of these gentlemen carry it in spades. They both only need one hit to end a fight. This could not have been more apparent than in Rozenstruik’s last fight against Alistair Overreem. Overreem was winning all 5 rounds of the fight this past December. But with 4 seconds left in the fight, Rozenstruik landed a ferocious hook that tore Overreem’s lip, in one of the more gruesome injuries seen last year. But he is matched against someone who has preposterous natural ability, Ngannou only has one victory that has gone the distance. Ngannou has not been past the 1st round in nearly 2 years. His last 3 wins are KO wins against, former champion Junior Dos Santos, former champion Cain Velasquez, and current #3 ranked heavyweight Curtis Blaydes. This fight is nearly guaranteed fireworks. Just for the sake of argument, the last time Ngannou was put in a similar matchup was against Derrick Lewis. That fight not only was Ngannous last lost, it also was widely considered one of the worst fights in UFC history. I hope this fight lives up to all the hype, Lewis vs Ngannou didn’t. Also, plan for the winner of this fight to fight for the belt in the near future once Stipe and Cormier settle their trilogy bout.

Now we made it to the 1st of 2 title fights the night has prepared for us. We have Triple C, Henry Cejudo against the often injured Dominick Cruz for the bantamweight. It will be Henry Cejudo’s 1st title defense, and the 1st time Dominick Cruz has fought in more than 2 years. Henry Cejudo is currently on a 5 fight win streak and was the person to save the flyweight division by defeating the then bantamweight champion, T.J Dillashaw in the first ESPN+ event ever.  Henry Cejudo feels that he is the greatest combat sports athlete of all time. With a win over one of the most decorated champions in MMA history, it will certainly bolster that claim. Dominick Cruz is coming off a lengthy layoff. His last fight took place in 2016, it was against Cody Garbrandt. It was a devastating loss as Cruz never seemed to find his rhythm. He does not believe in ring rust, last time Cruz had a long layoff due to injury was in 2011. He came back in 2014 to win and later won the belt for the 2nd time in 2016. Will Dominick Cruz be the first 3 time champion in the same weight class, since Randy Couture did it in the heavyweight division?

IT’S TIME (Bruce Buffer voice)!! Here is the main event of the evening, for the interim lightweight belt. Tony Ferguson has not lost in 8 years, that’s just ludicrous. In these 8 years, he has wins over names like Edson Barboza, Cowboy Cerrone, Showtime Pettis, Josh Thomson, and Rafael Dos Anjos. He has already won an interim belt in 2017 when he beat Kevin Lee via submission. Unfortunately, due to tearing his ACL, he was stripped of the interim belt. Of Ferguson’s 25 victories 20 have come by finish (12 KO; 8 SUB). Needless to say, Tony Ferguson is a freak. The MMA community makes funny memes of Ferguson’s training workouts and the attitude he has towards life. What’s even crazier than Tony Ferguson, is the fact that the person he is facing on May 9th is just as insane. Justin Gathje has come into the UFC on a mission. A mission to become the most exciting fighter ever. Boy is he cementing that legacy, in 6 UFC fights he has 7 performance bonuses. He has more performance bonuses than fights! He is coming into the octagon with a 3 fight win streak and has won all his UFC fights by KO. “The most violent man in the world’s most violent sport” is what Joe Rogan said in one of his JRE podcast episodes, describing Justin Gathje. This fight is chaos manifested in a professional sports environment. Even Gaethje believes that he will either knockout Ferguson or get knocked out by Ferguson.