Tulane OC Says Mooney is a Home Run for Bears 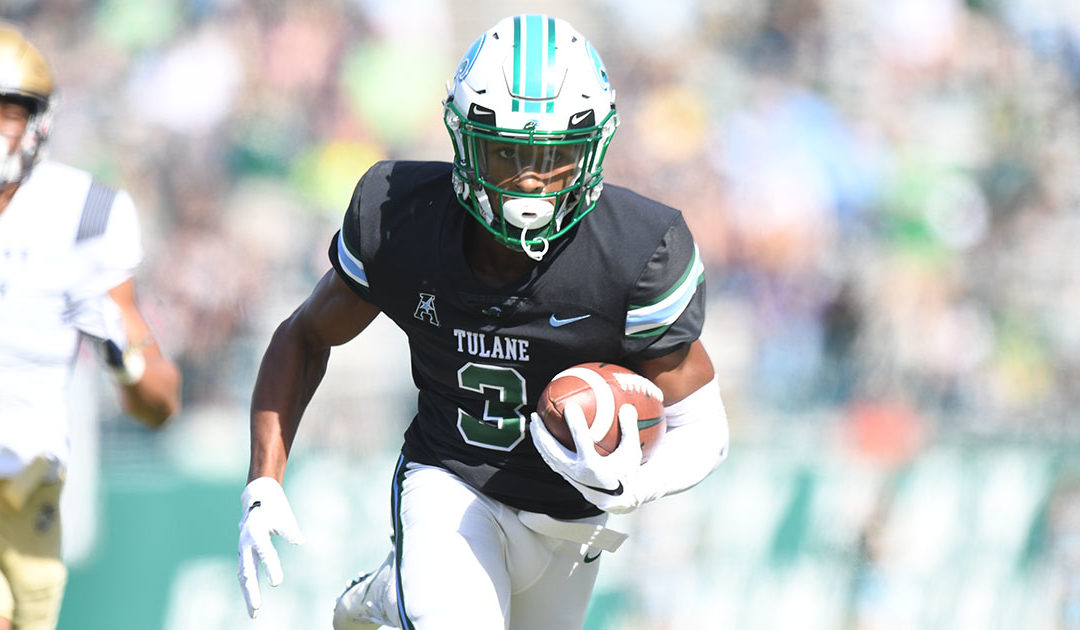 When the Chicago Bears drafted Darnell Mooney in the fifth round of the 2020 NFL Draft, there were some fans that questioned it immediately. On the other hand, there were a group of media members grading this pick with an “A”. I was intrigued with the pick because of Mooney’s speed and ability to stretch the field, but I wanted to get closer to the pick in order to really get a feel for what could be an important piece to the Bears’ offensive puzzle.

I had the chance to sit down with Tulane’s Offensive Coordinator, Will Hall to not only talk about the Green Wave’s rising success, but Mooney’s traits as he transitions into the NFL. Before I get into the thick of things, I have to say that Coach Hall was a pleasure to work with. Not only were his answers thorough, but the principle of taking the time out of your home schedule, especially on a weeknight, to jump on the phone meant a ton.

I began by asking about the staff and Hall’s offseason process in this altered reality we’re in. “Normally, we spend half of our days everyday this time of year, or more, traveling. Whether that’s flying on planes, or driving in cars, or both. Where, now, we’re just evaluating them, Zooming them, Facetiming them, and calling them…” Hall went on to express that he believes Tulane is ahead of the curve when it comes to technology and ability to recruit this way, but emphasized the importance of in-person visits and conversations.

I circled back to Hall’s perspective of Tulane before he became a part of the community. Begging the question of, what was attractive about the program? “Really, number one, and it was a big number one, was Willie Fritz…” Hall explained that he felt that Fritz blazed the trail that he could follow as far as a career path goes. Hall also mentioned that as a young offensive coordinator, Fritz was one of his heroes, as they coached against each other in previous years. Also mentioned was Hall’s familiarity with the area. Growing up in Mississippi, he was, and is, aware of the level of talent that surrounds schools like Tulane. Coupling the leadership of Coach Fritz as well as the talent that is available, “I felt like we were on the verge of doing something special…”, Hall said.

As I moved into the subject of Darnell Mooney, Hall had plenty of praise for the recent draftee. His first impression? “He’s got elite change of direction, elite speed on his first step.” Getting into the type of person Mooney is, “He’s a great worker. He’s a quiet young man that leads by example.” Hall also brought forward Mooney’s positive attitude and ability to impact others around him in a good way.

As for the on the field product, Hall continued to praise Mooney for what he brings to the table. Calling him an, “explosive, explosive human being.” I wanted to make sure I hit on some aspects of Mooney’s game that may not be so positive, like the catch concerns that have popped up in scouting reports. “Most of those drops were in games where the situation had already been decided…Those were what we like to say are concentration drops, which are easily fixable.” The Green Wave OC went on to say that Mooney’s ability to catch the football in big time situations always showed up. He recalled no ball that wasn’t caught that was an easy catch in a situation that really mattered. “He was always there and ready to be clutch.” Hall said about Mooney in the short time both were at Tulane at the same time.

Moving forward, Mooney, who chose #11 for his first NFL jersey, will be given the task of learning Bears’ Head Coach, Matt Nagy’s complex offense. However, there isn’t much doubt at all from his former coordinator. “You know, I don’t think it’ll take long.” The similarities between Tulane’s system and Chicago’s will be familiar with Mooney. Coach Hall said there may be some different terminology there that Mooney may need to get a grip on, but as far as being left in the dark, it seemed to me that Hall wasn’t concerned about that.

Some other traits that Hall brought forward were that Mooney had a great sense of humor, but is generally a quiet person. He reiterated that the new Bear is a “put my head down and go to work guy.”  From what I gathered from this conversation with Tulane’s offensive guru, Darnell Mooney will likely surprise those who doubted the pick, and reassure those who were happy with it. After all, who doesn’t want a high-character player who works his tail off and wants the best for the team?

I urge you to listen to the audio from this interview. There are parts that are not included in this text form that covers Mooney’s play and how he thinks the 22-year-old will take his game to the next level in the future.

Again, it was an absolute pleasure to speak with Coach Will Hall. He was nothing but kind. Watch out for this Green Wave team in the coming years. They’re on the up and up.