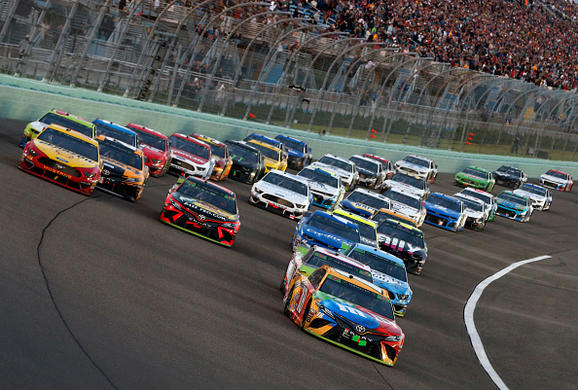 Now, this is not about Johnny Sauter in the Gander RV Truck series or the Xfinity series, as he has had solid careers in both. However, his NASCAR Cup Series career was cut short and abysmal in general.

In 2003, he ran five races for the late Morgan-McClure Racing drive the number four Kodak Pontiac Grand Prix. That same year in the Busch now called Xfinity series, he scored a win at Richmond.

It was announced then that Sauter would replace Steve Park who already replaced Jeff Green in the 30 AOL Chevrolet Monte Carlo for Richard Childress Racing in 2004.  Sauter would compete for rookie of the year along with Kasey Khane, Brendan Gaughn, Scott Riggs and Brian Vickers.

However, during that 2004 season, he was unable to score a top ten finish and only had five top 20 finishes in the first 13 races. Sauter was let go after a 20th place finish at Dover, being replaced by drivers Dave Blaney, Jim Inglebright (for the Sonoma race) and then Jeff Burton.

Sauter would go on to only score three top tens and one top five. One with Phoenix nRacing in the 09 car, one with Haas CNC Racing in the 70 car at Phoenix and a fifth at Richmond.  His last Cup start was in 2015 with BK Racing, driving the 83 and 93 Toyota Camry.

Not only did she sleep with her own car owner years later and couldn’t even compete in the Truck Series, but she caused the downfall of a driver named Jermey Mayfield.

Now as a kid, Erin Crocker has a lot of potential. She was a talented dirt racer and won a race at the age of seven at her local track in Wilbraham, Massachusetts. However, tragedy struck as her racing mentor and her father passed away from cancer.

However, that did not stop her. She won 12 heat races and qualified for the Knoxville Nationals which is where the best of the best go to race on dirt. In 2004, she would beat the best, being the first female driver to win in the world of outlaws.

Ray Evernham owner of Evernham Motorsports took notice and picked her to drive in the ARCA series. Even though she did not win a race in her first year, she still finished with four top fives and five top tens with an average finish of 5.2.

Crocker went to make starts then in the NASCAR Xfinity (Busch) series for Evernham and Bobby Hamilton Racing. She also made some starts in the trucks, but she had no success and was a wreck fest.  Crocker then drove part time in the Xfinity series and full time in the trucks in 2006. Once again, it was a demolition derby for her.

Later on that season, it was being rumored that Ray Evernham and Erin Crocker had more of a serious relationship. Jermey Mayfield who made the chase his first two seasons blamed the 19 Dodges performance on that reason. The team that was once in the chase, was now 34th in points.  Mayfield said that the car had “sub-par equipment,” and Evernham was never at the track.

Mayfield would be let go of the 19 car and later was suspended indefinitely after failing a drug test in 2009. Crocker meanwhile married her former car owner and they both had a kid together.

Trevor Bayne was a young and talented driver before he drove in the Cup series. Bayne won three races in the X-1 Pro Cup Series scoring three wins, 15 top fives and 17 top tens. In 2008, he raced in the NASCAR K&N Pro Series East driving the number one Chevy for Dale Earnhardt Incorporated. Bayne scored his first win at Thompson Speedway Motorsports Park.  He would join Roush in the Xfinity (Nationwide) series after DEI and Chip Ganassi merged to form Earnhardt Ganassi Racing.

In Baynes first year of the Xfinity series, he finished seventh in the points. The same year, he shocked the nation, being pushed by ford teammate Carl Edwards and winning the Daytona 500 in the 21 Motorcraft Ford Fusion for Wood Brothers Racing at the age of only 20, the youngest winner of the Daytona 500.

After four seasons of being a part time driver, Bayne would take over for Carl Edwards. Driving the number six Ford Fusion. After four mediocre seasons, he would be demoted back to a part time role after being 31st in the point standings. Matt Kenseth had to come out of retirement to replace Bayne and revive the six team. Sure enough, the team performed better with a former champion behind the wheel and Bayne at that point was released.Then, Ryan Newman took over the six Ford Mustang  in 2019.

Bayne had offers to drive for different teams that same season, but due to lacking sponsorship, he was unable to race. Him and his wife Ashton Clapp now run a coffee chain called Mahalo Coffee Roasters in Knoxville, Tennessee.

Shane Hmiel could have had the potential to do something big in NASCAR if it was not for his dirty driving and drug issues. Hmiel first drove in the  NASCAR Goody’s Dash Series, scoring two wins and 13 top ten finishes. He would earn rookie of the year and was then moved up to the Busch series.

However, not only was he causing trouble on the race track, but off of it too. Hmiel was suspended indefinitely in 2003. He did make a return in 2004 thanks to NASCARs recovery program, and that same season competed in the Craftsman Truck Series.

Hmiel would score his only NASCAR victory at Las Vegas Motor Speedway in September, moving Todd Bodine out of the way to get his first ever Truck series win. He would then go back competing in the Busch series and even make a few NASCAR Nextel Cup starts, driving the number 23 Dodge for Bill Davis Racing.

Controversy struck back up with him in 2005 during the Sharpie 250 at Bristol. With only a few laps to go, Shane Hmiel was using the bump and run tactic to a lot of cars. Then, he would wreck future Hall of Famer Dale Jarrett. Jarrett went up to show his displeasure with Hmiel, resulting in him flipping Jarrett off. Hmiel was fined $10,000 and fined 25 points from NASCAR.

Later that same year at Charlotte, it was announced that Shane Hmiel was tested positive again, this time for marijuana and cocaine which suspended him indefinitely.  He would try to get reinstated, but failed a third and final drug test in 2006. He was banned from NASCAR for life and went to get help from different rehabilitation centers.

Hmiel raced in open wheel racing after his rehabilitation and was turning his life around. That all came to an end on October 9th 2010 when Hmiel’s open wheel car caught air during qualifying. The car caught on fire and Hmiel was paralyzed with head, back and neck injuries. He has regained limits of his limbs but is still in need of a wheelchair.

Before Hailie Deegan being one of the most popular female drivers, Danica Patrick was on every Sports Illustrated magazine and every racing magazine. She did not only gain money from being a model, but she was a really talented Indycar/open wheel driver. In 2005, she was the Indycar rookie of the year, the Indianapolis 500 rookie of the year, and was the most popular driver from 2005 to 2010. In 2008, when all the other drivers had to pit for fuel, Danica took the gamble. It worked the way she exactly wanted it to work and won the Indy Japan 300.

In 2010, she moved into NASCAR, driving part time for JR Motorsports in the 7 GoDaddy Chevrolet Impala. 2010 was a disappointing year for her where she finished 43rd in points with a best finish of 19th.

2011 got off to a decent start with two top 20 finishes at Daytona and Phoenix. She then made history at Las Vegas when she surpassed Sara Christian‘s 62-year record to finish fourth in that race. Everything after that was just abysmal wrecking and then blaming. Despite two struggling part time seasons, it was announced that she was going to race full time in the Nationwide series for JR Motorsports and race part time in the Cup series for Stewart-Haas Racing.

Danica nearly won the race at Circuit Gilles Villeneuve, until she hit a shoe. The car started to act up and she fell all the way back, finishing in ninth place. It was later found out that that shoe was not the only problem. She finished 10th in the points that season. In 2013, she raced full time in the NASCAR Sprint Cup Series. She made history by winning the pole for the Daytona 500 and leading a lap in that race as well.

Besides that, her career was just a wreckfest and she was let go of the 10 car after the 2017 season. She made her final NASCAR start at the 2018 Daytona 500, where she wrecked, finishing 35th in that race. Later that same year, she competed in her final Indianapolis 500 start for Ed Carpenter Racing. She started the race strong, but on lap 68, she lost control of the car, hitting the wall, which would end her racing career.

She is still modeling to this day, she has her own podcast and is dating Green Bay Packers quarterback Aaron Rodgers. Patrick could’ve stayed in the Indycar series, winning a lot of races and possibly a championship. Instead, she went for more money and fame, which cost her racing career dearly.