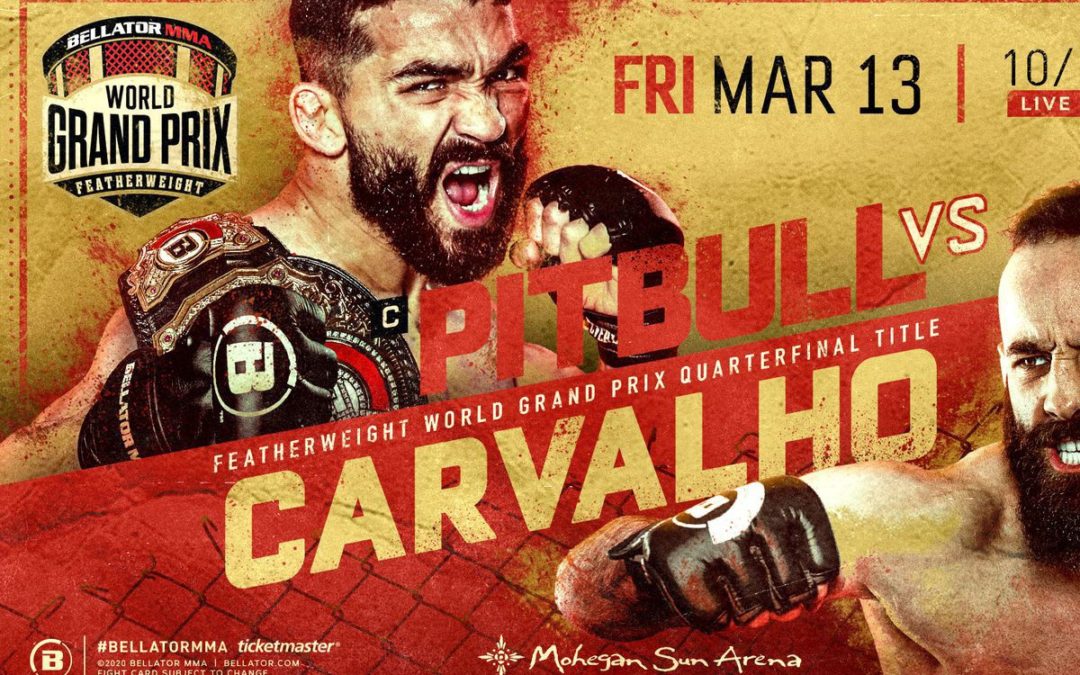 Bellator 241 is Friday, March 13th. The prelims begin at 7pm ET, and the main card starts at 10pm ET. There is the Featherweight title on the line, as well as future implications on how the title picture for multiple other weight divisions may turn out.  I’m here to provide insight on the main card as well as tidbits to look for in the prelims. Let’s begin.

The main card kicks off with a middleweight fight between a contender that may be one win away from getting a title shot after being undefeated in Bellator (5-0), in Anatoly Tokov. He faces a new face to Bellator in Fabio Aguiar who currently holds a record of 17-1.

Tokov has a solid all-around game, holding a record of 28-2 with 23 finishes. In his 5 Bellator bouts, he has finished all of them except the decision win he had against former Middleweight Champ, Alexander Shlemenko. Tokov has also proved in the past he can fight with adversity when he almost got knocked out by Gerald Harris in the 1st rd. He ended eating all the shots Harris could throw to put him away, but Tokov persevered and got the 2nd rd submission victory.

Aguiar is making his debut against a very dangerous opponent in Tokov. But Aguiar seems very game himself with a 9 fight win streak in the Brazilian Regional Circuit. He also has finished his last 6 fights, 5 by KO and 1 by submission. We will see if he can keep his momentum going, fighting for his new promotion.

Matt Mitrione is a very seasoned opponent, who actually made his MMA debut in the UFC. He currently holds a record of 13-7. Some notable wins he has been against Kimbo Slice, Derrick Lewis, Roy Nelson, and Fedor Emelianenko. He is a very good case of not how many fights you have in MMA but the quality of opponent you have fought that shows the pedigree of fighter he is.

Markes is making his Bellator debut against a tough and seasoned opponent. Markes is 5-5 in his last 10 fights. Markes holds a 19-7 record, and the two biggest names on his resume are being knocked out by Thiago Santos, and Yoel Romero. This fight vs Mitrione is much more winnable for Markes than against Barnett’s submission skills. Mitrione may use some wrestling skills and use his ground and pound to take this win, which should be an entertaining fight regardless.

Paul Daley is a fixture in the Bellator welterweight division since 2015. He has amassed a gaudy record of 42-17-2, with 31 wins by KO. As his nickname (Semtex) suggests he has bombs in those hands of his. Daley is facing someone who also has heavy hands in Sabah Homasi.

Homasi began his Bellator journey with an insane 17 sec KO finish against Micah Terrill this past August. He has a record of 13-8, while not that impressive of a record he does have 9 KO finishes in those 13 wins. And always tries to seek the finish, in his last 10 fights he has 6 wins (4 KO; 1 SUB; 1 DEC), and 4 KO losses.

Expect fireworks with this matchup, I absolutely see Daley trying to finish this fight early on to try to get himself back into that welterweight title mix. But he will have to be careful with Homasi, who trains at one of the most talent-rich fighter gyms in American Top Team, and should not be taken too lightly.

This is the co-main event, along with a match in the Featherweight World Grand Prix. One of these fighters will be one step closer to a title shot after this night. Both Weichel and Sanchez have come close to touching gold but have lost to the current holder Patricio Pitbull.

Weichel has had some bad luck in his last 3 fights, losing 2 by split decision. He has been fighting in Bellator since 2014 and is 7-3 in his last 10. Weichel has a BJJ black belt from Din Thomas, has a 40-11 record 25 of those wins coming by way of submission. He has only been finished once since 2015, and that was by the current featherweight king Pitbull.

Sanchez is 8-2 in his last 10 fights. In his last 5 victories, 3 of them have come by submission. He loves to look for a triangle, but with another experienced grappling specialist on the other side, it will be interesting to see how it all plays out. Sanchez carries a 19-4 record and has fought in Bellator since 2014 also. Both these fighters have many similarities, with their submission finishes, lengthy Bellator career, and both having lost to the current champion. This fight has the potential to be the fight of the night.

This the main event of the card, being both a Featherweight title shot and a round in the Featherweight World Grand Prix. Pedro Carvalho has been eying his shot at the champion for some time, actually electing to fight depending on Pitbull’s schedule in hopes to get matched up with him in the Grand Prix.

Carvalho is 11-3 and only 24 years old. He has finished his last 3 fights 2 of which by submission and 1 by KO. Currently holds a 6 fight win streak, and is undefeated in Bellator (4-0).

Pitbull is one of the champ-champs Bellator has, having won the Lightweight Belt from Michael Chandler almost a year ago. Pitbull has vast experience in title fights Having defended the title 5 times and has won it twice already. I respect the confidence Carvalho has against Pitbull, but let it not be shallow. Hopefully, Carvalho has put in all the work, and then some. Because Pitbull has been across the cage against all-world level talent and has come out victorious more times than not. He is already considered one of the best featherweights of all time. On March 13th he may just add to his legend.

Fighters to watch for in the Prelims:

Nick Newell making his 3rd appearance in a Bellator cage. Currently 1-1 for the promotion he hopes he can get over the .500 mark. He is the one handed-wonder, he is a very inspirational story of not letting anything stop you from reaching your goals, and it always feels good seeing him live out his dream of fighting.

Robson Gracie, yes of the MMA royalty Gracie family. Is making his 4th walk to the cage, having an undefeated record of 3-0, all 3 by submission. No surprise there.

Kevin Ferguson Jr, better known by his nickname “Baby Slice”. Son of Miami street fighting legend Kimbo Slice is also showing up to fight in the prelims. Hoping to earn another KO victory.