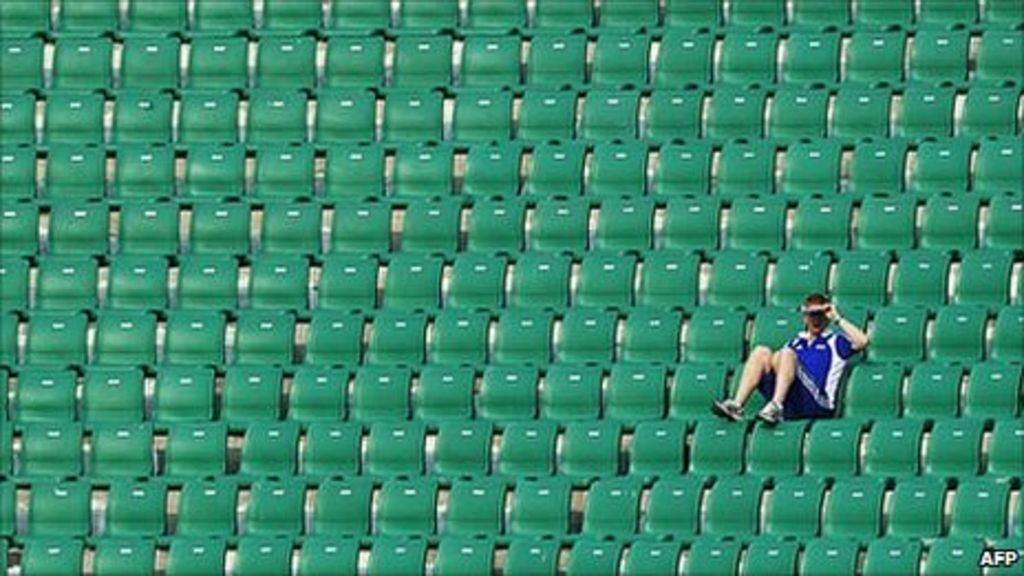 Amidst the NCAA and others announcing that they’ll be playing in front of, well, nobody, I immediately thought of that historic day when the Chicago White Sox and Baltimore Orioles played in an empty Oriole Park at Camden Yards. This is a quick look back at that event and some non-political thoughts about the Coronavirus.

The day was April 29, 2015. The Sox and O’s played a regular season day game in Maryland that featured a bunch of empty seats and echoes of the action on the field. It was the first time an MLB game was played in front of zero fans. Without getting into the political mess that it was, this occurred because of security reasons in and around the park even after two previously postponed games. Still televised, Baltimore got out to a hot start, scoring six runs in the first inning and cruising to an 8-2 victory.

Quite possibly the best part about the game was Gary Thorne’s PGA Tour impression that is below. Thorne is one of the most iconic broadcasters and the fact that he could take a second to have some fun with this strange atmosphere helped fans take it for what it was: An odd time in baseball that no one close to it will ever forget.

So, I suppose this supports the people that say playing in front of empty stadiums is stupid and unnecessary. Before I move on to the Coronavirus, I’ll just add in a bonus piece of content for the gamers. In MLB The Show 15’s feature that allowed players to indulge in whatever games were happening that day or in the past, personnel behind the game decided to make this specific matchup extremely authentic by removing the fans. I actually remember playing this and got a kick out of it. The YouTube channel “SportsGamingUniverse” captured it as well. It can be viewed below:

At this point there are varying opinions about this virus, it’s severity, and what the population should be doing. I’m a huge supporter of being able to have your opinion without being scalded for it, so I’m not here to tell you how to think, but act as a voice of reason for these leagues deciding to play in empty arenas.

Believe me, I think the sight of professional athletes playing in this atmosphere is hilarious and also takes away the at-home experience. Obviously this isn’t good for the optics of the game and will cause teams and leagues to lose money, but keep in mind their advertising obligations on TV and radio, immediately negating the thought of cancelling games at a semi-large scale. To the question of moving games around or simply postponing them; while it sounds easy, programming would be a nightmare and possibly create scheduling conflicts with live shows and or other teams.

Let me do my best to put a general perspective on this for those who just can’t wrap their heads around any of this. The Coronavirus has not delivered numbers close to the common flu, so initially there shouldn’t be anything to worry about. People who are getting diagnosed with the virus who don’t have any underlying health issues are surviving it. The spread of the virus is just like any other; molecules in the air via sneezing or coughing, otherwise known as airborne, and surface areas that are touched by an infected person. Sure, add in the obvious high fives, kissing, and whatever else young kids do nowadays. Anyways, to a lot of people, this seems a little too premature to freak out, which I totally understand.

The word I want everyone to think about is PREVENTION. Look, I don’t really think this virus is anything but the flu. However, the uncertainties that are still out there, and the unreliability of everyone taking the right steps to keep it from spreading are reasons for the seemingly over-the-top reaction that we’re seeing. Can you imagine EVERY single person in a stadium washing their hands when they get there let alone after they use the restroom? Neither can I. Can you imagine someone who might have the virus deciding to stay home and forfeit their tickets for the likes of the others attending the game? Neither can I. They won’t be able to control everyone inside their facilities, so the best thing they can do is keep everyone out. Again, I get that people, along with myself, don’t think this is anything to be scared of, but why spread it, or take a chance of spreading it if you don’t have to?

Another thing I wanted to mention that should appease the other side of the coin is how new this virus is. Although the short timeline mimics the common flu, it is unsure whether there are any long-term effects. Right now, there are a lot of “what if’s” going around, and little to no answers to those questions. This also seems like an extremely temporary thing. One thing that’s for sure is that in today’s era, doctors are extremely intelligent and quick to not only research these new forms of virus, but as we’ve seen recently, things can take a turn in a matter of days. Okay, that didn’t appease anyone who thinks this is dumb. Just understand that because of the unknowns that are associated with the virus, it’s in the general public’s best interest to lay low until the numbers dwindle and the smart people in white coats really understand it.

Whether all the leagues go to empty stadiums or not, here are some things you can do to avoid the Corona Virus: Wash your hands, like, more than usual. When you come home from somewhere, scrub away. When you get somewhere, do the same. Avoid jumping in front of anyone coughing or sneezing because that’s kind of gross in the first place. Wipe down any equipment that you might share with anyone. Last but not least, avoid touching your face. Germs are quick to make their way to where they shouldn’t. Just think about how gross it would be to touch a dirty public floor and then lather up that face of yours with good ole virus juice.

If you want to live your life, by all means. At this point, nobody should be telling you to live a certain way other than the aforementioned, and should be pretty normal, steps. Again this could all change in a few weeks, for worse or for better…probably for the better. Until then, just try to have some perspective with this entire situation.