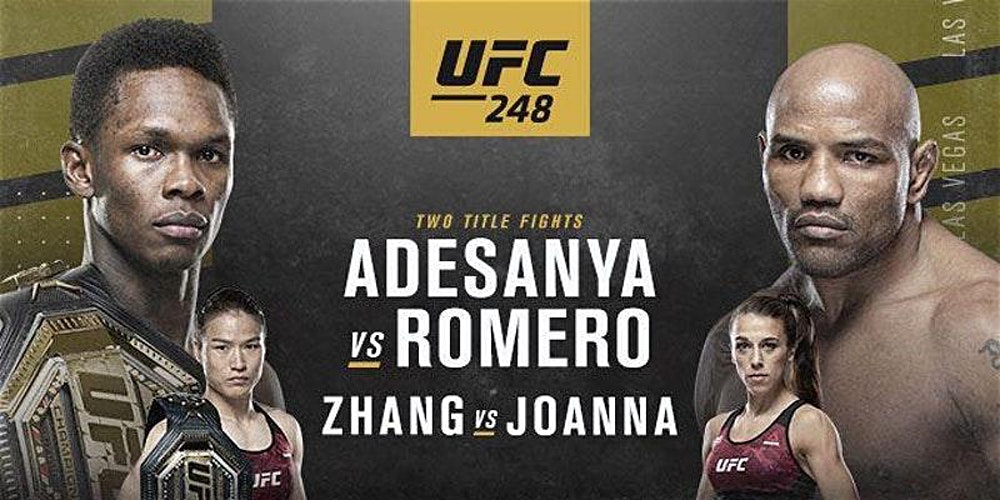 UFC 248 was a good all-around night of fights. While the main event was very lackluster, and probably one of the least action-packed title fights in recent history. There were some things that if you watched the event live may stay with you forever.

Before the main card even started we were treated to 3 undefeated fighters defending their 0 loss record.

Rodolfo Viera was the first undefeated man up, the fight lasted less than 5 minutes. But inside those fight minutes was everything MMA fans love to see. A brutal punch that left Viera seemingly missing an eye, after it was swollen shut. But Viera endured the punch to get a takedown and finish the fight with an arm-triangle choke.

Thank goodness for Viera’s submission chops, as he picked up his 6th submission victory. He has now finished all 7 of his victories. The fight was most likely not going to the 2nd round if he did not score the finish as quickly as he did, the doctor ringside would have most definitely stopped the fight from how tightly closed Viera’s left eye was.

After Viera’s submission win, another undefeated specialist came to bat. Mark Madsen showed his tremendous wrestling skills by suplexing Austin Hubbard and controlling most of the fight, coming out with the decision win. This improved the 35-year-old prospect to 10-0. Unfortunately, the Silver Olympic medalist suffered a broken jaw after the fight, and now faces a medical suspension of 6 months.

Finally, the last of the trio to fight was the superstar in the making Suga Sean O’Malley. Suga Sean had not fought inside the octagon in over 2 years. But he looked like magic out there, it was really the Suga Show. He demolished Quinonez in under 3 minutes of the 1st round boosting his record to 11-0 and earned a Performance of the Night bonus along with it.

The 25-year-old O’Malley still has ways to go on his way to legendary status. But it seems like it is going to be an enormous amount of fun to see him continue to grow as both a fighter and a transcendent star. He clearly has that “IT Factor” that draws attention to him. He is a free spirit, who is not afraid of the big moments. I fully expect to see O’Malley back in the Octagon soon considering he took no damage, Quinonez didn’t land a single one of the eleven strikes he threw.

Going into the main card one of the highlights was the epic 2nd round brawl Baneil Dariush, and Drakkar Klose put on for the masses. It started off with Klose rocking Dariush, Klose went in for the finish. But Dariush hit Klose with a shot to the chin which made Klose begin to backpedal. Soon after Dariush connected with another shot to put Klose away for good.

It was as exciting as an exchange the sport can provide, which is why all MMA fans including commentators, Joe Rogan, Jon Anik, and Daniel Cormier were launched into a frenzy of screams and handclaps.

In the Co-Main Event, we saw the first title defense of Weili Zhang, against who many consider the greatest strawweight ever, Joanna Jedrzejzyk. The fight was hyped up, with Zhang actually flipping the bird to some of Joanna’s fans during the open workouts.

Both women outdid themselves. Showing how far women’s MMA has come over the years. Insane to think there was a time where women’s MMA might have never gone mainstream. We have Ronda Rousey, love her or hate her to thank for this not happening.

Zhang and Joanna put on one of the greatest fights in MMA history, regardless of gender. They both pressed each other for the full 25 minutes. Zhang eating Joanna’s technically sound strikes. While Zhang showed the world that she is an all-time fighter in the making.

The fight was razor-thin close, and Zhang was awarded the split decision win. Defending her belt, for the first time against one of the most decorated women’s champ in UFC history.

After the millions watched the action-packed marathon that was Weili Zhang vs Joanna Jedrzejzyk, we were immediately gifted with one of the least entertaining title fights in recent memory.

Adesanya vs Romero was uneventful, to say the least. Both fighters combined landed 88 total strikes for the full 25-minute fight. The fight before landed a total of 366 strikes between both fighters. The difference of action for both fights was fire and water.

In the end, it seemed that Adesanya did enough to take the decision win. Adesanya is known to be an action fighter, constantly compared to Anderson Silva. Even though Silva finished all 8 of his first 8 UFC fights, Adesanya has only finished 3 of his first 8.

Adesanya definitely has a star quality to him, but for the new fans that this might have been their first fight watching him. Might have been left with an impression of somebody who is not exciting. Which is terrible considering what Adesanya had done to the former champ Robert Whittaker just the fight before. Knocking him out in the 2nd round.

UFC 248 was well worth the price tag if you came in understanding that for every Zhang vs Joanna you get an Adesanya vs Romero. This is the cruel nature of MMA, as electrifying the sport can be, it also has the potential to be as dull as a night out with my grandmother. Love you, grandma!