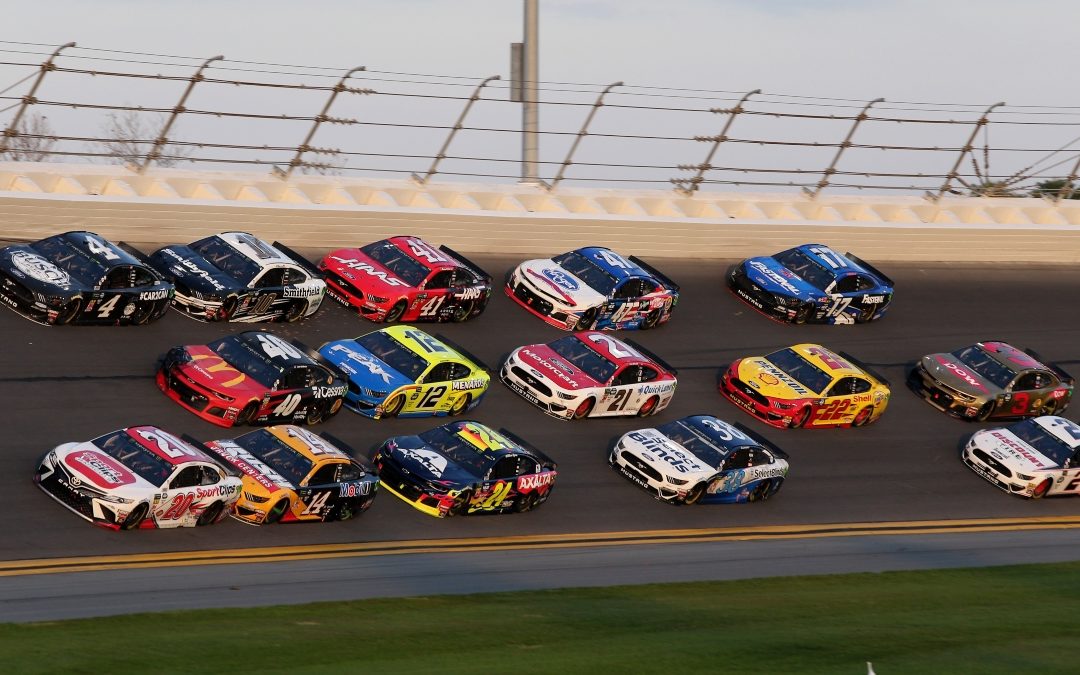 Football season may have come to an end for the NFL, but that means it’s NASCAR’s turn to take over Fox Sports and NBC. What a better way to start out the 2020 season than with the 62nd annual Daytona 500. Since that is one of the biggest races of the season, then that means there has to be a list.

While 2010 to some was a boring year for NASCAR, plus hatred towards the sports after Jimmie Johnson’s fifth title in a row, the sport needed a big underdog to step up to the plate. That is when 20 year old Trevor Bayne came out of nowhere in the later half of the race and took the lead late.

Bayne was in second during the last restart, but the 6 Roush UPS Ford Fusion moved up before crossing the start/finish line. This resulted in a lane violation and Bayne with help from Ragans teammate Carl Edwards in the 99 Aflac Ford becoming the youngest winner of the “Great American Race.”

This was the Wood Brothers first win in the NASCAR cup series since Bristol of 2001 where they won with Elliott Sadler. This would be Trevor’s only win in the Cup series as he would move to Roush, only to be released after the 2018 season, while sharing his 6 Ford Mustang with 2003 cup champion Matt Kenseth.

The Wood Brothers went back to being a full time team, making the round of eight with Ryan Blaney in 2017, and being a top 20 car in points with Paul Menard in 2018 and 2019. Now, that car looks to win the 2020 Daytona 500 and more with Matt DiBenedetto taking the helm of that 21 MotorCraft Ford Mustang.

Three years before the 2004 season, NASCAR witnessed their biggest loss and the worst Daytona 500 ever. NASCAR would lose their hero in Dale Earnhardt Sr on the last lap. Two years later, Michael Waltrip won his second and in 2004, that shadow was lifted from Daytona for good.

On the last pit stop, the Bill Davis Dodge of rookie Scott Wimmer was out in front after the crew changed right side tires only, trying to win another 500 like in 2002 with Ward Burton. However, the tires and a lack of a draft partner made Wimmer give up the lead to the 20 Chevrolet Monte Carlo of Tony Stewart.

The year before, it was Michael Waltrip in the 15 NAPA Chevy winning his second 500 after the race got rained out. Now, it was the 8 Budweiser’s turn to use those moves that Dale Sr had taught him on the track.

Dale Jr trailed Stewart for most of the second half, but in the closing laps, Earnhardt Jr took the lead and never looked back. Stewart tried to draft and pass Dale, but it was too little too late and another Earnhardt would be crowned victorious in the Daytona 500, keeping the Earnhardt legacy alive.

Earnhardt Jr also won Daytona in the NASCAR Xfinity (formally Nationwide) Series back in 2010, driving the Number 3 Wagner Chevrolet. That win was thanks to a late wreck by Paul Menard with four laps to go, and Tony Eury Jr deciding not to pit under caution.

Ten years later (2014), Dale did the same thing. This time, he had to hold off a big pack of cars behind him in order to win his second ever 500.  Dale’s last win came at Phoenix in 2015, with his final season being in 2017. Earnhardt Jr finished with 26 Cup Series wins. He drives part time in the 8 Chevrolet Camaro, usually about once or twice a year.

This Daytona 500 was just wild from beginning to end.  Speedweeks started off with a surprising starting lineup. The two drivers were Robert Yates Racing teammates of Ricky Rudd and David Gilliand. Gilliand was in his technically first full time season with the team after replacing Elliott Salder in the second half of the 2006 season, and Ricky Rudd who only ran Watkins Glen for an injured Tony Stewart. Rudd came back to racing after taking a year off.

This race also gave us a little rivalry at the time between the 2 Miller Lite Dodge of Kurt Busch and the 20 Home Depot Chevrolet of Tony Stewart. On lap 152, Stewart got loose and took him and Busch out of the race. This rivalry continued for a bit in 2007, notably at Dover a few weeks later.

It was looking like Mark Martin who was at the time a four time runner up. Martin was racing part time in the 01 Army Chevy for Ginn Racing, and looked as if he would finally break that 500 winless streak.

However, with five to go, Kevin Harvick, the closure as they called him, passed drivers like Gilliand, David Stremme, and Greg Biffle.

Then on the final lap, Harvick and Martin raced side by side, following by a big crash in the back. NASCAR did not throw the caution, and instead let them race for the checkereds. Clint Bowyer in the 07 Jack Monte Carlo went across the start finish line upside down. In the end, Harvick beat out Martin by only .02 seconds in which was the closest victory until 2016 with Denny Hamlin and Martin Truex Jr.

Martin finished his career with five runner up finishes, 40 wins and was inducted into the NASCAR Hall Of Fame in 2017. Harvick meanwhile is still racing in the NASCAR Cup Series with 49 wins and won the 2014 Cup Series Championship.

On a snowy and cold Sunday, people needed a new sport to watch. That’s when they changed the channel to CBS and found the 21st running of the Daytona 500. This was going to be the first ever Daytona 500 that was flag to flag.

Buddy Baker and Donnie Allison swept the front row which meant during the qualifying race, they were able to keep their spots.

The race started under green and yellow for the first 15 laps, but slowly picked up after. Baker lost the draft on the 16th lap and could not get back up front.

In the closing laps, the 11 Busch Oldsmobile of Cale Yarborough and the 1 Hawaiian Tropic of Donnie Allison were neck and neck. That’s when the two cars tangled and crashed down the backstretch.

The two cars would slide into the grass and “The King” Richard Petty who ended a 45 race winless streak in the 43 STP Oldsmobile. This would be his sixth Daytona 500 before winning his seventh and final one in 1981.

That’s when Both Donnie and Bobby Allison fought Yarborough. Not only engaged in fisticuffs, but wrestled in the infield mud too. To quote Bobby Allison from the The 10 Greatest 500 moments, he said “Cale started yelling at me that the wreck was my fault. I think I questioned his ancestry.”

Before number one, there are a few honorable mentions that if this was a top ten list, they would have made it.

First is the first ever Daytona 500 back in 1959. The best way to finish the first ever 500 mile race is that of a photo finish with Lee Petty and Johnny Beauchamp. Beauchamp was originally given the victory. Few days later, the trophy was handed over to Lee Petty who protested at least 10 times. Plus, the delay was great for the Newspapers.

Next is the 2016 Daytona 500. The year before was criticized a lot with the car’s speed being decreased. Also, NASCAR just lost their biggest star at the time in Jeff Gordon who retired full-time after 2015.

In the end, the 2016 Daytona 500 proved to be one of the best in the Gen Six era so far. On the last lap, Matt Kenseth in the 20 Dollar General Toyota had the lead, but got loose and Denny Hamlin took his spot. Hamlin and Martin Truex Jr would come across the start finish line and Hamlin ended up just beating him. The finish was 0.010 seconds.

Since his first race in 1975, Dale Earnhardt Sr “the intimidator” has won everything before the 1998 season. Well, almost everything. One thing that was missing was a Daytona 500 victory.

He’s had his chances. Back in 1990, Earnhardt Sr was leading on the last lap until he cut a tire, giving the win to Derrike Cope. In 1997, Dale was once again battling for the lead, but with 12 to go, he would be involved in a wreck with his car flipping over. Earnhardt still finished the race surprisingly finished five laps down in 31st.

Then in 1998, it was his time. Dale used the lap down car of Rick Mast as a pick so that the 18 Interstate Batteries Chevy Labonte would be held up. The race ended under caution after Lake Speed and John Andretti got involved in a wreck.

In the words of NASCAR lap by lap announcer Mike Joy “20 years of trying 20 years of frustration, Dale Earnhardt will come to the caution flag to win the Daytona 500… finally.”

Every crew member from all 43 cars congratulated Dale as he drove down pit road, and finally, the drought was over. Earnhardt won his final race at Talladega in 2000, before tragically passing away on a last lap crash of the 2001 Daytona 500.