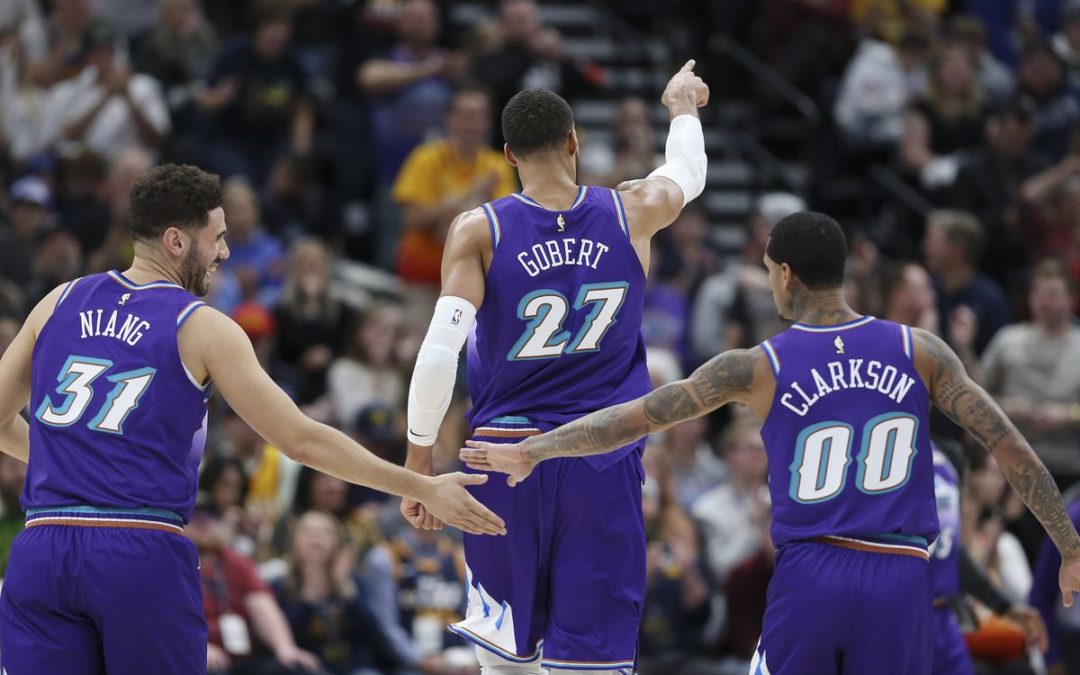 Salt Lake City is officially in the hunt for a title, but it’s their offense, rather than their patented defense that’s got them here. 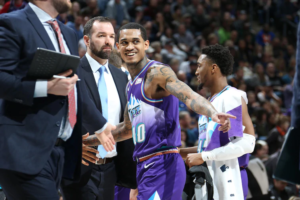 The Utah Jazz have built a reputation as a strong defensive team over the last several seasons. According to Cleaning the Glass, they have ranked in the top ten in defensive efficiency every year since 2015, topping out at the most stifling team in the league during the ’18-’19, with only 104.7 points allowed per 100 possessions. Much of their success on the less glamorous end of the court can be attributed to the exploits of two time defensive player of the year, Rudy Gobert. Believe it or not, the Jazz actually ranked dead last in defensive efficiency in Gobert’s rookie year with an abysmal 112.2 points allowed per 100 possessions. The French Rejection only got off the bench for 9.6 minutes per game that season. By the time Gobert got consistent minutes in ’15-’16, the team had risen to 7th in efficiency.

But those days have since gone away. As of January 27th, this team is 2nd in the West with a fabulous record of 32-13. That gives them the 3rd best record in the association. They have won 14 out of their last 15 games, officially making them the hottest team in the world. FiveThirtyEight’s ELO forecast gives the Jazz a 25% chance to make it to the championship round, and an 10% chance of bringing home the Larry O’Brien trophy. Those numbers may sound pretty minuscule, and they are. The odds are still stacked significantly against Utah taking into account the legendary Bucks, and stacked squads that await just west in the City of Angels. But let’s not forget. This is a small market franchise that has built up a legitimate contender on the margins. They haven’t been blessed with a wealth of top ten picks over the last ten seasons. The only ones that this franchise selected were Enes Kanter (3rd) in 2011 and Dante Exum (5th) in 2014. Neither player is currently suiting up for Utah. When you’re reliant on the NBA’s snazzy revenue sharing system to turn a positive prophet most season, you certainly have to ball on a budget when it comes to roster construction.

That makes it difficult to bring in a clear cut star capable of getting buckets whenever the situation calls for it. For years, they trusted their beloved swingman from Butler, Gordon Hayward to close games and bring home the bacon. Let’s not get it misunderstood, Hayward was, and still is a special talent in this league. At his peak before the unfortunate leg injury, it was common practice to rank Hayward as one of the 25 best players in the world. Nothing to scoff at. And yet, he couldn’t lift the Jazz above league average in offensive efficiency. Something was missing. In the Summer of 2017, Hayward sought green pastures (literally) and departed for Boston. The franchise was back to square one in the offensive arms race. Of course, the basketball gods are always up to something to turn the tides back in someone’s favor. That tide turned out to be Donovan Mitchell. The rookie shot out of the gates fast averaging 20ppg and producing some big time playoff performances. Still, the team could not muster up an above average offense for ‘17-’18, or even last year. Asking Mitchell to dominate so much of the offense just wasn’t fair, or conducive to their success, considering his experience level and skill set.

Through the first 3rd of this season, it seemed to be the same old story. The front office went to town in an effort to grab extra shot creation and perimeter shooting. Bojan Bogdonovic and Mike Conley were given a combined $49.5M for the season to pump some points into this squad. Although Bogdanovic provided a much needed boost, (more on him soon), Conley couldn’t stay healthy, and struggled to get a grasp of the new Jazz offensive scheme. After a December 9th loss to the Thunder, the team was 13-11 and left searching for answers…again. The Jazz have been known to get off to slow starts and they usually recover nicely in the 2nd half, but what a strong case of deja vu do to the outlook of a team looking to compete at basketball’s highest level?

According to Cleaning the Glass, the Jazz are scoring 112.6 points per 100 possessions played. This year, that’s good for 7th in the league standings. However, that’s also including their sluggish start to the season. If we narrow down the window to only the last two weeks, where they have only lost once, it jumps all the way up to NUMBER ONE in the association, a full 2.4 points ahead of the second place Mavericks. The last time the Jazz ranked this highly on offense over an entire season was all the way back in the 2009-2010 season. That season, they finished in…7th place. Sound familiar? 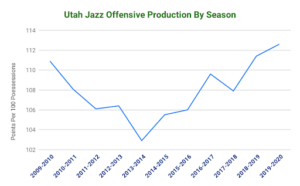 Their league rank may be the same as it was ten years ago, but the numbers that contribute to that rating couldn’t be any more different. For starters, this team takes a much higher proportion of their shots from the three point line. That naturally leads to more three point baskets and a higher payoff per shot. Back then, Utah was only taking 17.9% of their shots from behind the arc. Fast forward to the present day and the number has ballooned to 35.8%. This has obviously boosted their effective field goal percentage, which relies heavily on the added value of a three point shot.

Based on the laws of Physics, longer shot attempts often create longer rebounds, which decreases the likelihood of offensive rebounds, since players who box out to create an advantage under the hoops miss out on the balls that fly over their heads to defenders.  This Jazz team is much less reliant on the power of second chance attempts to create offensive, although they do have a terrific rebounder in Gobert. Their offensive rebounding percentage is only 23.3% for this season, down considerably from the 30% mark they set in 2010.

Zooming into this record setting campaign, there are a few people and concepts in particular that have played a part in boosting Utah’s scoring and putting them on a level playing field alongside some of the league’s finest teams.

First off, we have to give some credit to Utah’s newest member, Jordan Clarkson. Acquired via trade from Cleveland on December 23rd, Clarkson has spent the majority of his career toiling away on deep lottery teams, while posting good to very good offensive numbers. Miscast as a starter in Los Angeles, he has been reborn over the past couple years as a supersub capable of dropping 15-20 points in his sleep with pretty decent efficiency. Look closely and you could very easily get Jamal Crawford or JR Smith type vibes. His outside shooting has been pretty erratic over his six year career, but his EFG% remains steady, because he’s always been able to finish well at the rim. That’s slightly surprising considering his slight frame and average height.

Consider these stats for a moment. The Jazz are 14-1 since picking up Clarkson. It hasn’t been the toughest schedule in the world, but winning 14 out of 15 games during a long season can’t be overlooked. The team has scored 118.7 points per game, shot 50% from the field, and 39% from deep in that 15 game sample size. 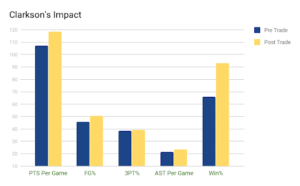 It’s time to work our way back to Bogey, because he absolutely deserves huge credit for what has been happening here. He is lowkey having one of the most efficient shooting seasons ever and that is no hyperbole. The numbers speak for themselves. 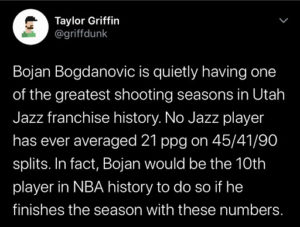 We haven’t seen a wing player on this team capable of getting quality looks as a three-level scorer since Hayward flew the coop.

Utah has been absolutely scorching the nets from deep this season. As a matter of fact, they are the most efficient three point shooting team right now, according to Cleaning the Glass. They are sitting just under 40% as a team, which is pretty incredible.

During the late to mid 2010s, the goal for this franchise was to regain respectability and find pieces to build around following the exit of former All-Stars Deron Williams and Carlos Boozer. The Williams trade netted them big man Derrick Favors, who would go on to be a crucial interior anchor for their strong defense.  Next came the diamonds in the rough like Joe Ingles, who would raise their floor, but not necessarily their ceiling. Mitchell has become the crown jewel of the organization that could end up being the best player on a championship team. This is all well and good, but their lack of diversification when it came to ‘the others’ really became their undoing against Houston in the postseason.

All they needed was a few X-factors to get them over the hump when the action inevitably slowed down in the playoffs. Opponents are finding out that bringing extra help to defend Mitchell or Gobert heading to the hoop is a recipe for disaster. Not only is Bojan having one of the best all-around shooting seasons in recent history, but the newly re-signed swingman Royce O’Neale is bombing deep ones at a 44% clip. That has lifted the Jazz offense to heights not seen in ages and should give the pillars of this team ample room to work with even in increased playoff pressure when they decide they want to get comfortable in the paint.

There hasn’t even been a mention of Mike Conley here yet. When he gets back into the normal swing of things, there will be yet another weapon that even the most disciplined defenses will have a hard time containing.

As an NBA franchise shooting for a championship title that one team out of thirty wins each season, it’s extremely difficult to climb the mountaintop. Patience, skill, cunning, and a dash of luck are certainly required. After years of building a foundation with non lottery picks and under the radar signings, it looks as though this team has all of the ingredients necessary to win it all.