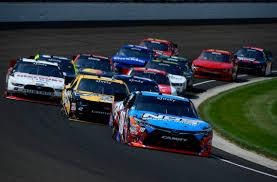 Charlotte Motorspeedway is not the only track taking right turns now, as it was announced that the Xfinity Series will race on Indianapolis Motor Speedway infield road course, during 4th of July week.

The reason for this change could be because of the decline in attendance and how Indianapolis is just not as good as a race track like it once was. With “The Captain” Roger Penske taking over however, the goal for Penske is to add new events to bring the racing back to Indianapolis like it was in the 90s and early 2000s.

The official layout for the track will be determined after testing. If it goes well, then the layout can be the exact same as the Indycar Grand Prix. The feature in early May had 14 turns and had 2.439-miles length.

With the difference between Indycar and NASCAR, it will be interesting to see if this road course idea is either a success, or backfires badly. Just like Charlotte, this road course will include portions of the oval.

The NASCAR  schedule for 2020 has swapped the tracks and dates. Indianapolis for the last two years, it was the regular season finale. That will be replaced by the Coke Zero Sugar 400 at Daytona. Meanwhile, the Big Machine Vodka 400 at the Brickyard will be July 5th, with the Indiana 250 for the Xfinity series being on the 4th.

There will be a Florida Georgia Line concert at the Speedway along with camping, the race, and the fireworks show. Last years winner was Kevin Harvick in the four Ford Mustang for Stewart-Haas Racing. For the Indiana 250 in the Xfinity series, the winner was Kyle Busch who has won the Brickyard 400 twice (2015, 2016). He drives the 18 Toyota Camry and Supra for Joe Gibbs in both the Cup and Xfinity (part-time).