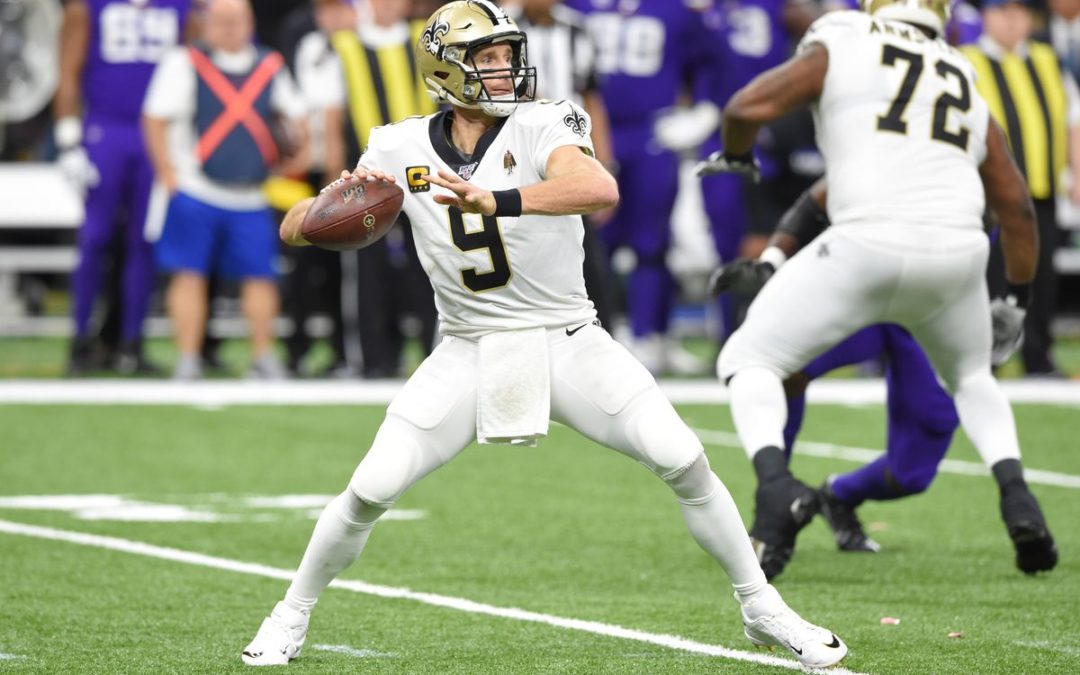 Following the tough loss to the Minnesota Vikings in the Wild Card Round of the 19-20 NFL Playoffs, many Saints fans were calling for the retirement of Drew Brees. Yes, you read that correctly. Some Saints fans really want the team to move on from the 13 time Pro Bowler. I’m here to slow that train of thought down real fast and look at this from a statistical point of view. Drew Brees this season missed five full games yet still managed to throw 27 touchdowns, 2,979 yards, and only four interceptions. Drew Brees also completed 74.3 percent of his passes, good for the second highest total in NFL history trailing only himself for that record. His total QBR of 71.9 ranked third best in the NFL trailing only Lamar Jackson (2019’s likely MVP), and Patrick Mahomes (last year’s MVP). At age 40, Drew Brees has proven time and time again that he can still compete at the highest level.

If you’re still not sold that the New Orleans Saints should keep Brees based off the numbers I mentioned, let’s take a look at the players people think should be replacing him. The two players i’m seeing most of to replace Drew Brees are Teddy Bridgewater and Taysom Hill- the only other quarterbacks on the Saints roster. Teddy Bridgewater took over the team when Drew Brees went down with his hand injury in Week Two and led the team to a 5-0 record in Drew’s absence. In those five games, Teddy completed 67.9 percent of his passes while throwing for 1,384 yards and nine touchdowns. He also threw two picks. Excluding the Rams game where both quarterbacks played, under Teddy Bridgewater the Saints averaged 25 points per game. Under Drew Brees the Saints averaged 32.4 points per game. That’s a significant difference. I’m not knocking Teddy Bridgewater by any means, I’m simply stating why Drew Brees needs to remain the signal caller for the Saints in 2020. Now let’s take a look at Taysom Hill. Taysom Hill has always played a utility role for the Saints as a product of Sean Payton’s master mind approach to coaching. He only threw four passes in 2019 completing two of them for 55 yards. Taysom also ran the ball 27 times for 156 yards and a touchdown. Taysom was one one of the most effective weapons not named Michael Thomas at the receiving position where he hauled in 19 catches for 234 yards and six touchdowns. If the Saints opted to go with Taysom Hill as the starting quarterback over future Hall of Famer Drew Brees, they would miss out on using the full potential of Taysom Hill. Taysom Hill and Sean Payton are a match made in heaven. Taysom has always been willing to do whatever has been asked of him and Sean Payton continues to utilize him. However, Taysom’s success doesn’t stop me from cringing every time he throws the ball. His lack of actually playing quarterback (meaning throwing the ball more than twice a game) would surely catch up to him if he was asked to take over the team. Taysom is nothing more than a freak athlete and fans should appreciate the facts that we have him in that role.

All in all, Saints fans need to realize the struggle of having a franchise quarterback in today’s NFL and not try to push one of the greatest to ever play out of the door. How many times have we thanked the Chargers for losing faith in Drew Brees? Why would you even remotely consider wanting to move on from Drew? Drew Brees quite literally saved the New Orleans franchise when he signed with the team in 2006. Yes, I know that there’s always a time to let your star go, but that time is not now. Drew Brees is still playing at a high level, he’s still winning games, and he’s rarely turning the ball over. If Drew was struggling this would be a different article, but he’s not. Instead of pushing greatness out the door because of one bad game, let’s appreciate greatness while we still have it – because we won’t have it for long.