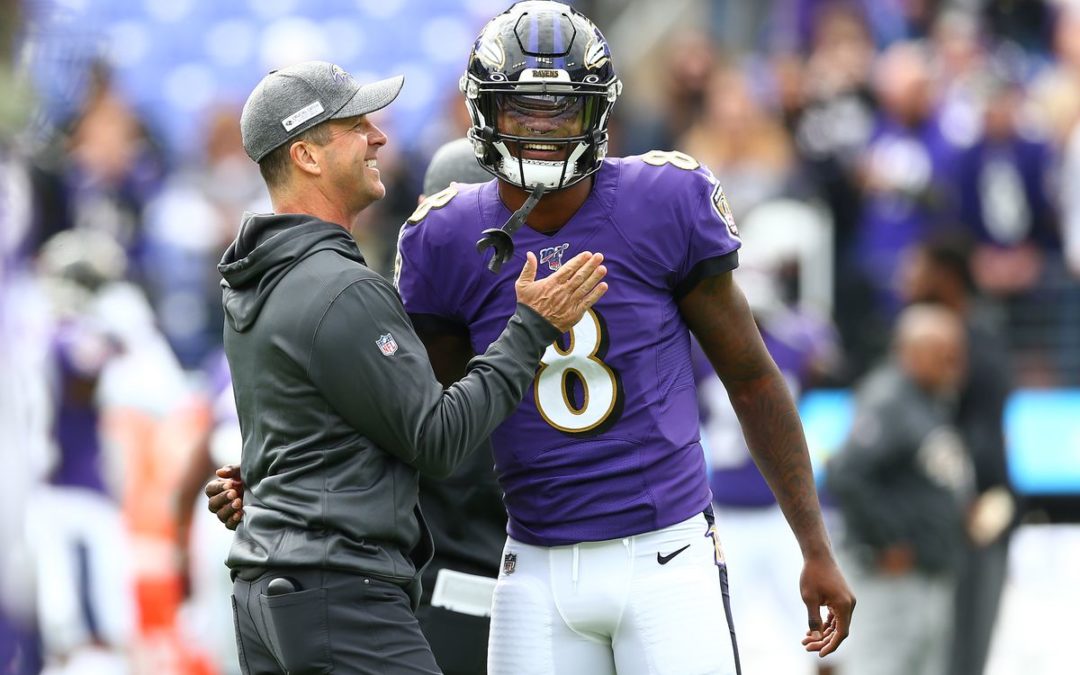 What a week we had in the NFL. Lamar Jackson grabbed hold of the MVP race, Dallas came up short in New England, and the 49ers laid the smackdown on the Packers. The AFC playoff race has heated up and added some competition for the six seed. The NFC playoff race looks all tied up except for the NFC East winner where Dallas and Philly attempt to outlast each other. Thanksgiving this week will give us three games to digest before Sunday. There were stellar performances all over on the weekend and Week 13 will bring even more to the table as there are a number of superb games this weekend.

The newly appointed #1 ranked team in DVOA the Baltimore Ravens return home to face-off against the #3 team in DVOA on the season. The Ravens currently have the best offense in football and it is amazing to watch. Lamar Jackson is doing things on the field that we have never seen before. Jackson is leading all QB’s in touchdowns from the pocket which should keep the haters at bay for the moment. This matchup is a good one for the Ravens as the 49ers run defense is the weak point for them. The 49ers rank 16th in run defense and they will have to tighten that up against one of the most unique and physical running teams in the NFL. I expect the 49ers to be sound technically at the point of attack but expect this to hurt their pass rush. The Ravens will continue to run the ball and use play-action in this one and continue their physical approach in the trenches.

The 49ers offense has been up and down all season. The biggest concern has to be the struggles of the run game. The 49ers are currently in the bottom 1/3 of the league in rushing DVOA. On top of that Jimmy Garoppolo has been just good enough this season. The 49ers are hoping that he continues to grow and his win-loss record is great however he throws 3-4 passes a game that leaves you scratching your head. I expect the 49ers to use screens and misdirection in the run game to slow this blitz heavy Ravens defense which has looked really good in past weeks. The addition of Marcus Peters and the leadership of Earl Thomas has this defense playing at a top 10 level and if they continue to play at that level the Ravens will be a tough out. That being said I believe Shanahan will have a game plan that will keep it close I think the Ravens win a close one but the 49ers cover.

One of the most underrated stories of the 2019 season has to be the resurgence of Ryan Tannehill and the Tennessee Titans coming off a dominating performance over the Jaguars last week. Since Tannehill became the starter the Titans are 4-1 and average 29.4 pts a game. They are currently 11th in DVOA on offense and Tannehill has played himself into what will likely be a new contract as the starter of the Titans. This matchup is huge as both teams are looking to lock up a playoff spot. The Titans control their own destiny as they have the Colts this week and the Texans two more times before the end of the season. I expect the Titans to continue to do what they do well and that is run the ball with Henry and have Tannehill do just enough to control the game.

The Colts come in with a struggling offense that has not looked good since Jacoby Brissett’s injury. Since returning Brissett has only averaged 138.5 yards a game. It would seem that coach Frank Reich does not trust Brissett however the weapons on this team are so banged up it is quite possible it is a personnel problem. That was not helped with the news that T.Y. Hilton suffered a small set back and will not be playing this week. Eric Ebron was also put on IR to add to the Colts injury dilemma. The Colts defense has been improving every week and is a top thirteen unit however they rank nineteenth against the run. The Colts will be tested in this one and will need to get some turnovers to turn the tide in this game. The Colts will need to pull out all the stops and have an excellent game plan to get this one.

A potential huge matchup as far as playoff seeding goes will kick off Monday night. The Vikings travel fresh off the bye to Seattle where the past has not been kind to them. Teams off the bye this year have not been as sharp as in years past but this is a chance for the Vikings to get a grasp on the NFC North. The Vikings offense has been great all year minus the first couple of weeks and ranks 5th in DVOA so far this season. Kirk Cousins has also played well despite critics and early struggles. The Vikings will cause serious concern to this Seattle secondary that is very suspect and has not played well all season.

The Seattle defense ranks in the middle of the pack and will be tested in this one. On the other side of the ball, the MVP candidate Russell Wilson will have to show what he is all about again in this one. The Vikings defense has been very stout against the run however it looks as if there may be a changing of the guard in Seahawks backfield as Rashaad Penny was able to run all over the formidable Eagles run defense. Chris Carson struggled and it is the first time that Carson’s struggles coincided with a good Penny game. I expect the Seahawks to still establish the run game in this one however it will come down to the speedy receivers getting passed the leaky secondary of the Vikings for them to win this one. My expectation is this game is bogged down by undisciplined play and becomes an under game not only because of an expected rusty Vikings offense but both these defenses show up and slow down these top five offensive attacks.

That wraps up the Week 13 edition of the most intriguing matchups for this week honorable mention goes to the Pats vs Texans and the Browns vs Steelers. Remember to check out unwrappedsports.com as there is a plethora of content. Also, check out the USN family at www.sportcastr.com where you can follow my live content my Week 13 picks as well as Week 13 player props @semiproUSN. Look forward to seeing you guys there. Have a good Thanksgiving weekend and we will see you soon.