Week 12 Review: Buffalo Bills Make Strong Push for the Playoffs with Eighth Win of the Season 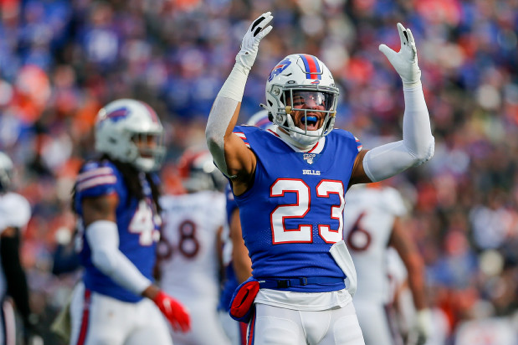 After a convincing 20-3 victory against the Broncos, the Buffalo Bills move to 8-3 on the year for the first time since 1996. Many times this year, the Bills find themselves doing things for the “first time since…” and continue to prove people wrong by winning games and are making their case to play games into January. The offense continues to find their identity, but for the first time a win came against a top five defense. Coming into week 12, the Broncos had the fourth best pass defense in the NFL, allowing 210.8 yards per game. Although they held Josh Allen to just 185 yards passing, he still was able to throw for two touchdowns, which now makes him the first Bills quarterback to throw at least two touchdowns in seven consecutive games since Jim Kelly in 1991. Buffalo now holds a two-game lead on the first Wild Card spot, and are just two games behind the division leading New England Patriots.

The Bills defense proves yet again, that they can dominate any team and continue to win games for Buffalo. Going against first year starter Branden Allen would not be a tall ask for the Bills, but Denver has some productive playmakers on the offensive side of the ball. Phillip Lindsay and Courtland Sutton have been the main focus for the offense, and the Buffalo defense made them nonexistent. Tre’Davious White continues to make his run for not only a Pro-Bowl season, but possibly an All-Pro season. Shadowing Courtland Sutton all game, and allowing him just one catch for 27 yards would make him the Broncos leading receiver. Branden Allen would finish the game 10/25 for 82 yards and one interception. His second half stats would be even scarier, as he would complete just three passes on 12 attempts for four yards in the second half. The Bills will have a short week, as they will face off against the Dallas Cowboys on Thanksgiving, and will have a harder task to control Dak Prescott and the Dallas offense. 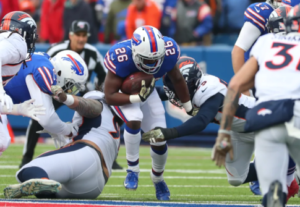 The Bills offense has been able to find a groove the past two weeks against Miami, and now the Denver Broncos. This may be because of the move from the sidelines to the sky box for offensive coordinator, Brian Daboll. He now can help Josh Allen with eyes from the sky and helping him read defensive coverage, or it could just be smarter play calling. Rookie, Devin Singletary ran for over 100 yards for the first time in his career and consistently put the Bills in great positions to put points on the board. Although he would not score, Singletary would finish with 106 yards on the ground, from 21 carries on the day. The Bills run game would ultimately be the key for victory in week 12, between Singletary, Gore, Allen and Foster, Buffalo would run for 244 combined yards. Honorable mention to the 36-year-old running back, Frank Gore, who would finish with 65 yards on the day and now finds himself third on the all-time rushing list, after passing Barry Sanders in Sunday’s game. If the Bills want to sustain this success going forward on a tough stretch, the run game will have to continue to produce to alleviate some pressure from Allen. 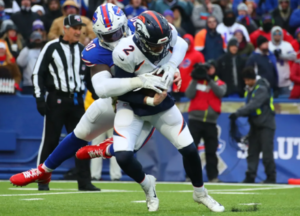 Throughout this season, Tre’Davious White has been the most important part on the stellar defense, and had another great game in week 12. That being said, he was not the MVP in this game. All the success in the secondary starts up front with the defensive line. In the past two weeks, the Buffalo defense has racked up 11 total sacks. Week 12 saw four sacks, including two from the most valuable player from this week, Shaq Lawson. Lawson was only on the field for 54% of the defensive snaps, but he made them count when he was out there. He would finish the game with two sacks which puts his season total to five total sacks. Lawson, and the entire defensive line were able to get pressure on Branden Allen, forcing him to throw the ball away multiple times and make mistakes throughout the game. If Shaq Lawson can continue to play at the level he has been, he will be looking at a respectable pay day when the offseason comes, as the Bills did not pick up his fifth-year option before the season started. With Lawson ramping up his level of play, and Ed Oliver recording sacks in back to back weeks, the Bills are looking to wreak havoc on opposing offensive lines and quarterbacks during this final stretch. 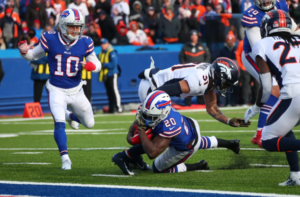 Back at the start of November, the Bills were first in the NFL when it came to offensive red zone success, scoring touchdowns 71.43% of the time. At the end of November, Buffalo has fallen to sixth in the NFL, getting in the end zone just 64.52% in their games. In their week 12 matchup against Denver, they only had success 33% of the time to score a touchdown. In order to put teams away early in games, Buffalo will need to fix this problem to trade seven instead of three. The Bills were holding onto just a 6-0 lead at halftime, which easily could have been 10-0 if it hadn’t been for bad discipline on the Bills offense. Penalties took them out of great field position on multiple occasions, including a holding penalty that negated a Frank Gore run that got the Bills to the Denver one yard line. Buffalo could be in a different position in the standings, if they could score more touchdowns instead of field goals throughout the season. Going against a high-powered Dallas offense will be a test for Buffalo to match their strength and keep up with the Cowboys.