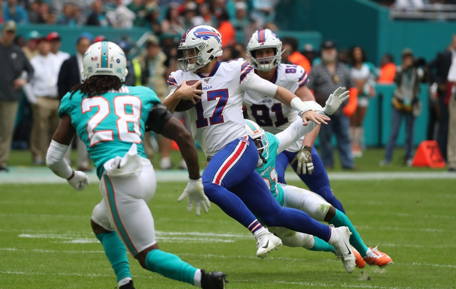 After Sunday’s win, the Bills move to 7-3 and have their best record through ten games since 1999. Completing the season sweep of the Miami Dolphins helps Buffalo when it comes to divisional wins and AFC matchup wins, but it won’t be an easy road from here on out. With the final six games coming against teams who have a combined record of 34-26, including the 8-2 Baltimore Ravens, 9-1 New England Patriots, and a Thanksgiving matchup against “Americas Team,” the 6-4 Dallas Cowboys, the Bills will have a tough task in front of them.

Buffalo would score the most points all season this week against the Dolphins, scoring four touchdowns and putting up a season high, 37 points. Although the Buffalo defense would struggle to keep Miami out of the end zone, allowing three touchdowns, the run defense had a dominating game for the first time this season. Josh Allen would prove yet again that his best games come against Miami, completing 23 passes on 33 attempts for 256 yards and four touchdowns. Allen now has a five-game streak of at least two touchdowns and no interceptions, and is the first NFL quarterback to do this since Russell Wilson did this in 2015. Allen is progressing well, but will truly have to prove himself against playoff-caliber teams in the coming weeks. 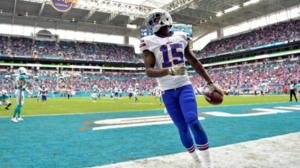 Bills wide receiver, John Brown has silently been climbing the ranks as one of the best receivers in the NFL, and was sure to add to his case this past Sunday. Brown currently sits eighth in the league in receiving yards with 817 on the year, after adding 137 yards against Miami. John Brown is well on his way to be the first 1,000-yard receiver for Buffalo since Sammy Watkins did it in 2015 with 1,047 total yards. Brown has been the most reliable target for Allen this year, and proves to be worth every dollar Brandon Beane gave him this offseason. John Brown continued his streak of at least 50 yards receiving in every game this year (one of two players in the NFL). He now leads the Bills in receiving touchdowns (4), as well as yards, and was able to create separation on any defender in the Miami secondary. Teams will most likely start to use double-coverage on Brown which may open opportunities for other receivers and weapons on the Bills offense. 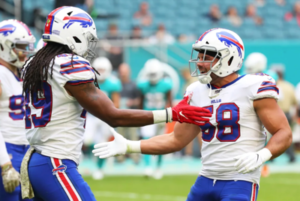 The first time these two teams faced off in week six, the Bills defense was without one of their top defensive players, Matt Milano. In week 11, Milano played and he showed why he is so important to the success of the Bills defense. Back in week six, the Dolphins still had running backs Kenyan Drake (later traded) and Mark Walton (now suspended), and their offense ran for a combined 109 total yards. Getting Milano back and also having a great game from Tremaine Edmunds, allowed the Bills to shut down the Miami run game, allowing just 23 total rushing yards. The feature back for the Dolphins, Kalen Ballage was the leading rusher for the game, carrying the ball just nine times for only nine yards. Having Edmunds and Milano on the defensive side of the ball, makes the Bills defense one of the more talented defenses in the league. Before the week 11 game, captain Tremaine Edmunds, brought the team together in the locker room, giving them a motivational message on the importance of the final stretch of the year to make a playoff push. If these two linebackers can continue to dominate, they may not only find themselves in talks for pro-bowl, but could be carrying the Bills to just their second playoff appearance since 1999. 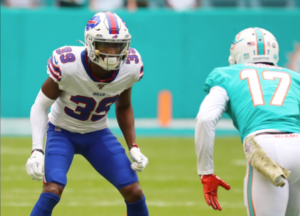 The Bills secondary is holding opponents to 197.8 average passing yards per game this year, and sit in third place on the NFL. Most of the success can be credited to the safety duo of Hyde and Poyer, and the pro-bowl season of TreDavious White. Across from White undrafted free agent, second year CB, Levi Wallace, who had a great start to the year, and Buffalo thought they found a hidden gem. Wallace’s performance has dropped off quite a bit since the start of the year, as he seems to be allowing his receivers to get open for big plays more often, and offenses consistently look to his side of the field. Wallace saw his playing time diminish against Miami, as Kevin Johnson stepped into his role and produced well when called upon. Levi Wallace allows 5.7 receptions per game, and an average of 10.4 yards per reception. If the Bills want to continue to win games down the stretch, Wallace will have his hands full against quarterbacks like Dak Prescott, Lamar Jackson, and Tom Brady in the coming weeks.