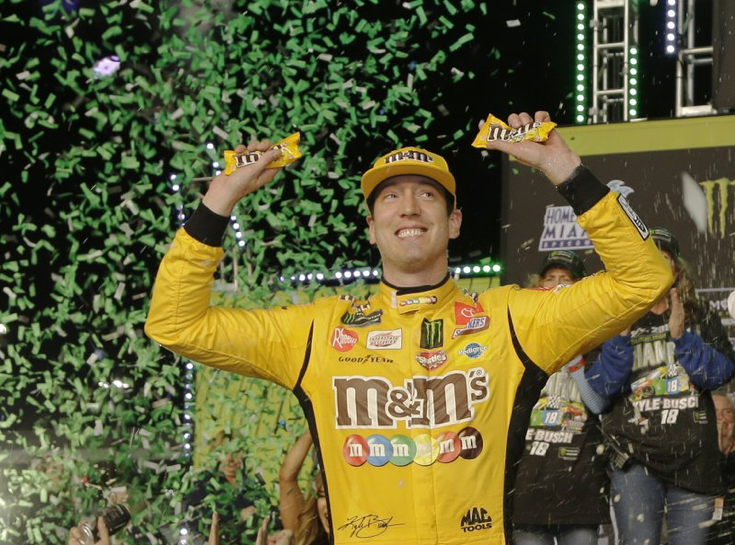 Sunday was the season finale race for the Monster Energy NASCAR Cup Series as four drivers would each battle out for the championship trophy. This race would not only be the final for drivers such as David Ragan or Paul Menard, but also the last race at Homestead Miami Speedway as it will be moved to March with ISM raceway taking over as the season finale in 2020.

However, one driver wanted to win his second championship after coming up short in the last three seasons. Let’s just say, the fans were rowdy after.

Championship four contender Kyle Busch has won the Ford EcoBoost 400 at Homestead-Miami Speedway and clinched the 2019 Monster Energy NASCAR Cup champion. Busch led 120 of 267 laps in the 18 M&Ms Toyota Camry for Joe Gibbs Racing. Busch would claim stage two and had the momentum follow him to his second championship. His first was in 2015 which was his comeback story after suffering a gruesome leg injury at Daytona during the beginning of the season. This is Busch’s 56th win of his career, fifth of the season, his second at Homestead and the 208th win between all three series (Cup, Xfinity, and Gandar Trucks Series).

Joe Gibbs Racing has their other three cars and the two other title contenders finish in the top 10. Martin Truex Jr in the 19 Bass Pro Shops/Tracker ATVs/Boats Toyota claimed stage one and led 103 laps. He also fought back from an early tire issues in stage two. However, he would be seconds behind teammate Busch and come up short of getting his second championship. Erik Jones in the 20 DeWalt Toyota nearly went a lap down to his teammate Truex in stage one, but bounced back to finish third. The final Gibbs championship contender was Denny Hamlin in the 11 11 FedEx Express Toyota. Hamlin would have a water pressure issue due to tape being on the girl, and because of that, went a lap down ending his chances for his first title. Hamlin would get his lap back, but finish 10th.

Stewart Haas Championship contender Kevin Harvick was around the top five for most of the race, just coming up short in stages one and two. Harvick in the Busch 4 Ford Mustang GT for Stewart-Haas Racing led 41 laps and finished fourth. Clint Bowyer finished in sixth place driving the 14 Rush Truck Centers/Haas Ford, Daniel Suárez finished 14th in the 41 Haas Ford in his final race with the team, and Aric Almirola finished 22nd in 10 Smithfield Ford.

Hendrick Motorsports did not finish the season strong. William Byron in the 24 Axalta Chevy for Hendrick Motorsports had an engine failure on lap 215. Byron would finish 39th. Chase Elliott finished 15th in the 9 NAPA Auto Parts Chevy, Jimmie Johnson finished 13th in the 48 Ally Chevy, and Alex Bowman was the highest Hendrick car finishing ninth in the 88 Nationwide Chevy.

Kyle Larson ended his 2019 the wrong way, as on lap 209, his engine blew up. The 42 Credit One Bank Chevrolet Camaro for Chip Ganassi Racing finished 40th. Kurt Busch who recently signed an extension with the team, finished 21st in the 1 Monster Energy Chevy.

Ryan Newman ended his 2019 season on a positive note finishing seventh in the 6 Wyndham Rewards Ford for Roush-Fenway Racing. His teammate Ricky Stenhouse Jr led one lap and finished 19th in his last race at Roush-Fenway Racing, driving the 17 Fastenal Ford.  Stenhouse will drive for JTG Daugherty Racing in 2020.