Week 10 Review: Buffalo Bills Fall to Cleveland, Drop to 6-3 on the Year 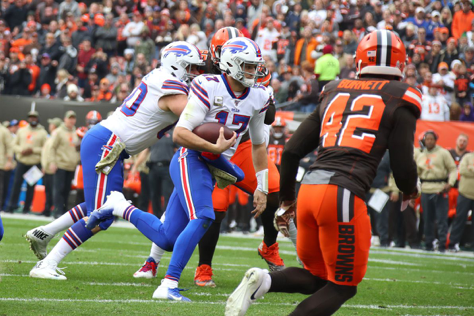 The Buffalo Bills dropped their third game of the year, and the offense seemed to be lost yet again. Amassing just two touchdowns, Josh Allen and the Bills offense struggled, which has been the story for most of the 2019 season so far. There were multiple chances for Buffalo to put away the Browns, but Allen and the offense could not get it done.

The first regular season meeting of the number one and number seven overall draft picks from 2018 did not quite live up to the hype. Baker Mayfield would come into week ten struggling this year, and was looking for a bounce back game in a big way. Mayfield would finish 26/38 with 238 passing yards, and two touchdowns and consistently made big plays for his offense. Cleveland’s young quarterback currently sits second in the NFL in interceptions with 12, and Buffalo was not able to create any turnovers. If Buffalo still wants to sneak into the playoffs, they are in a good position to after the Miami Dolphins beat Indianapolis, but the Bills will have to pull off a few upsets later on this year to play a game in late January. 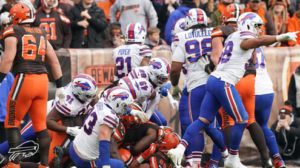 Like every loss, it is hard to take away any good from a game, especially after a hard loss like week ten. To look at the silver lining of the state of the Bills, they are still holding onto the first Wild Card spot by one game. Many Bills fans do not want to just “sneak in” the playoffs, they want the Bills to dominate, and win the division or earn a Wild Card spot, but sadly, Buffalo is just not there yet. Beane and McDermott have been preaching the process since day one, and continue to assure the organization that they are still on track. With the Colts dropping a game to Miami on Sunday, Buffalo has a one game lead over three teams, including the Pittsburgh Steelers (5-4), who by the way the Bills will face in week 15, and the Oakland Raiders are close behind (5-4) and with a tough schedule to finish out the year. The Bills may have to win just four of their next seven games to get a Wild Card spot. In order to get there, the coaching staff will have to make serious changes, and work to find an identity for the offense. 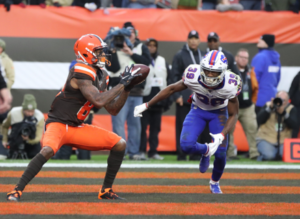 For the seventh time this year, the Bills defense has kept their opponent to under 20 points scored, and made improvements from past weeks. Although, Cleveland running back Nick Chubb ran for 116 yards, that is not the reason the Bills lost. Chubb would have 20 carries for 116 yards, while Kareem Hunt, in his first game back after suspension, would finish the day with four carries for 30 yards. It is now three weeks in a row that the Buffalo defense has allowed an opposing running back to run for over 100 yards. There were no rushing touchdowns, and after an outstanding goal-line stand by the Buffalo defense, where Cleveland attempted eight different plays from the Bills three yard-line and came away with zero points, it seemed that the Bills defense would be able to shutdown Cleveland all game. That was not the case, as WR, Jarvis Landry finished with nine catches, racking up 97 yards and also a touchdown on the first drive of the game. Tre’Davious White continues to dominate the receivers he covers, as he shut down Odell Beckham Jr. allowing just five catches for 57 yards. Buffalo was not able to record any turnovers on a team that gives up the ball fourth most in the NFL. Not enough pressure on Mayfield and not being able to stop the Cleveland offense late in the game is a main reason the Bills ended up on the losing side. 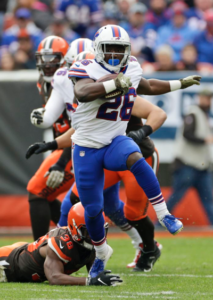 If the Bills were able to score at least 20 points in every game this year, they would have a record of 8-1, and would have only taken a loss to the Philadelphia Eagles in week seven. The offense is what has plagued this team all year, from being a Wild Card team to a potential threat for the AFC East. Coaching can be blamed for the sub-par offensive performance, especially play caller Brian Daboll, who could be on the hot seat after not being able to find an identity for his offense. Just one week earlier, rookie Devin Singletary was given the ball 20 times and rushed for 95 yards. One week later, Singletary was only given the ball eight times (three in the first half) for just 42 yards rushing. The lack of star power weapons on offense has really shown the pasts few weeks, and as Allen seems to be struggling, the constant drops from Dawson Knox and lack of production from everyone besides John Brown are not helping his case.

A great deal of blame can be put on coaching in this game, as it seemed the final drive for the Bills was being played to tie the game instead of going for a win. With 1:44 left of the clock, Josh Allen and the offense got the ball trailing by three points. Sean McDermott and Brian Daboll decided to put faith in kicker Stephen Hauschka, rather than their believed to be franchise quarterback, to score a touchdown and win the game. If the offense can score at least three touchdowns a game, the defense should be able to hold any opponent to under 20 points. Daboll needs to figure out whether he wants his team to be a run-heavy team, or rely on the pass game, because not using an explosive player like Singletary is a big mistake for this offense.