Another Sad Year to Be a Knicks Fan 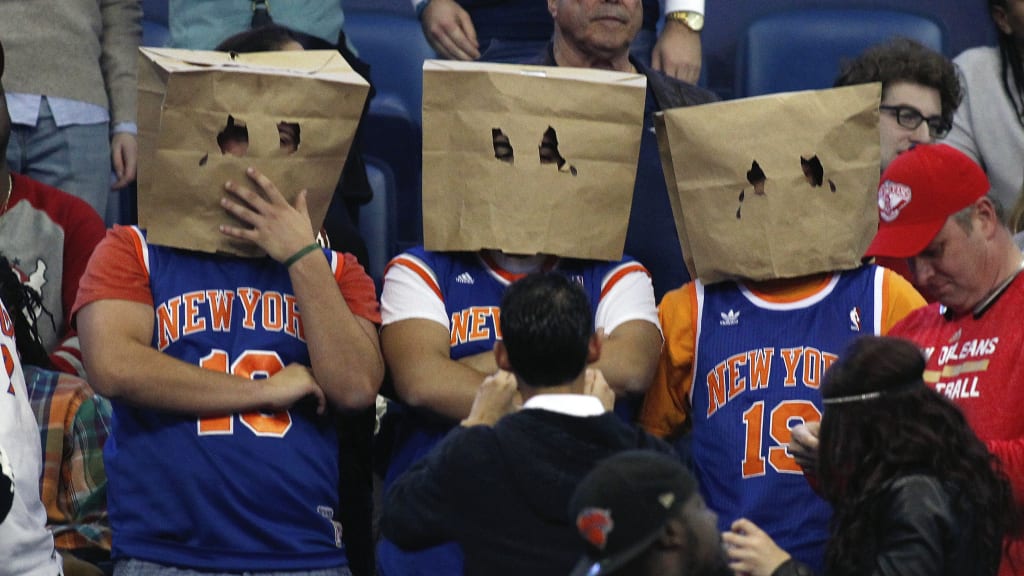 2012-2013 season. 54 wins. Third in offensive rating. Third seed in the eastern conference. A playoff series win. Sixth man of the year JR Smith, Carmelo Anthony winning the scoring title, Steve Novak lighting up the garden, Tyson Chandler anchoring the defense, Jason Kidd leading the team, Iman Shumpert’s insane putback dunk, Kenyon Martin’s toughness, fan favorite Chris Copeland, Rasheed Wallace returned to the NBA, and what was left of Amar’e Stoudimare. One of the best, most fun and exciting years as a Knicks fan was watching this team. As a Knicks fan born in the late 90’s, I never witnessed the Ewing era and the NBA Finals appearance. So, for me, this was the peak of my Knicks fandom, literally, because it’s been all downhill since.

Here we are 7 years later in the 2019-2020 NBA season. Since that 2013 squad, the Knicks have yet to make the playoffs, yet to win more than 37 games, and have had two seasons with only 17 wins. In terms of relative offensive and defensive ratings, which are advanced metrics that compare one team’s offensive and defensive to those in the rest of the association, the Knicks are well below league average in both categories in the last 7 years. In this stretch, the Knicks have had five different head coaches as well. Mike Woodson, Derek Fisher, Kurt Rambis, Jeff Hornacek, and David Fizdale, who is also rumored to be fired in the near future. Not a single one of these coaches have been given more than two seasons before they have been fired, and if the Fizdale rumors reign true, he’ll fall victim as well.

The only silver lining the New York Knicks had during this nightmare end to the decade was the 7’3” unicorn who is one of the league’s best rim protectors and can hit 30-foot threes, who of course is Kristaps Porzingis. The Knicks drafted Porzingis fourth overall in the 2015 NBA draft and initially us fans booed the pick. Who was this skinny Latvian that no one really knew about? Why did we draft him when we needed a point guard and Emmanuel Mudiay was still on the board? The summer league began, then preseason, and then the 2015-2016 NBA regular season got underway, and those boos very quickly became the loudest of cheers. Porzingis was blocking shots, banging deep threes, hitting post ups and face ups over any defense, throwing down monstrous putback dunks, and was so smooth at creating his own shot off the dribble even at 7 feet tall. New York fell in love with him, he was going to take us back to the promiseland, but then Phil Jackson happened. The Knicks hired Phil Jackson to be the President of Basketball Operations in 2014. To say he underachieved is actually an understatement, Phil Jackson is one of the worst things that ever happened to the Knicks organization. Carmelo Anthony to this day says he didn’t want to leave New York, he was pushed out (referring more than likely to Jackson). Porzingis noted this disrespect, he didn’t like the way Anthony was treated. So when the offseason began, Kristaps skipped his exit meeting with the team. This infuriated Phil Jackson to the point he was calling and taking calls on trades for Kristaps Porzingis, and from that moment on, Kristaps was quietly trying to get out of New York.

The last game he would ever play for the Knicks was the game against the Bucks in which he tore his ACL as he was traded to the Mavericks last season for Dennis Smith Jr, Wes Mathews, DeAndre Jordan, and two first-round picks. This was an extreme risk that the Knicks pulled off. They essentially traded the franchise star for cap space as Mathews and Jordan were expiring deals. The move gave the Knicks two cap spots to land what was rumored to be Kevin Durant and Kyrie Irving, but, as we know, they went to the other team in New York, the one that hasn’t been a complete mess for the later half of this decade. That max cap space turned into Julius Randle on a 3 year $63 million dollar deal, Marcus Morris on a 1 year $15 million dollar deal, and then low money one year deals with player options to Bobby Portis, Taj Gibson, Reggie Bullock, and Wayne Ellington. See the problem here? Yeah, 3 of the players they signed are power forwards, two are shooting guards, one’s a point guard. What does this do? When it for one, makes for a really bad basketball team. The Knicks are horrid with the league’s worst record at 2-9. The offense is the worst it’s ever looked. Marcus Morris is playing the three next to Julius Randle, when he is clearly a four but because they paid him so much they feel obliged to start him. This means the Knicks lottery pick from last year, Kevin Knox, is getting less playing time as a result. There is also zero shooting on this team. It’s just nonexistent. The Knicks are relying on Morris, Randle, Portis, rookie RJ Barrett (who is a stud), and Kevin Knox to carry the majority of the load from three, which is just flat out not good. Do the Knicks even have a starting quality point guard on the roster? I don’t think so.

There are a few positives from this start to the year, though. For one, RJ Barrett is the truth and he wants to be a Knick. Playing out of position at times on a poorly constructed roster, Barrett has looked like the Knicks best player averaging 16.0 points per game, 5.8 rebounds per game, and 4.1 assists per game while also shooting 36% from three on 3.5 attempts per game. At times he’s looked like he has the tools to be a solid NBA defender as well. Kevin Knox, who in the offseason stated he wants to shoot 40% from three this year, is doing exactly that on virtually the same attempts and makes per game. He’s shooting 44% up from 34% last year and has looked truly great from beyond the arc this season. Frank Ntilikina has also had a few impressive games, most notably the Mavericks game last week. Outside of that, it’s been ugly.

But here we are Knicks fans. Kristaps’ return to the Garden is this today. This was the game I was most excited for this season, and as the season progresses, the least excited I become. I was teased all last season thinking stars were coming, just for them to go to the Brooklyn Nets. As a Knicks fan, it was the biggest slap in the face and what we are seeing on the court is just what I’ve become accustomed to at this point. I may come off as pessimistic in this article, but I love this team, I love this city, and I love basketball. I want the Knicks to not be a joke so badly. They don’t even have to win a playoff series, but give me a team capable of making the playoffs, please!