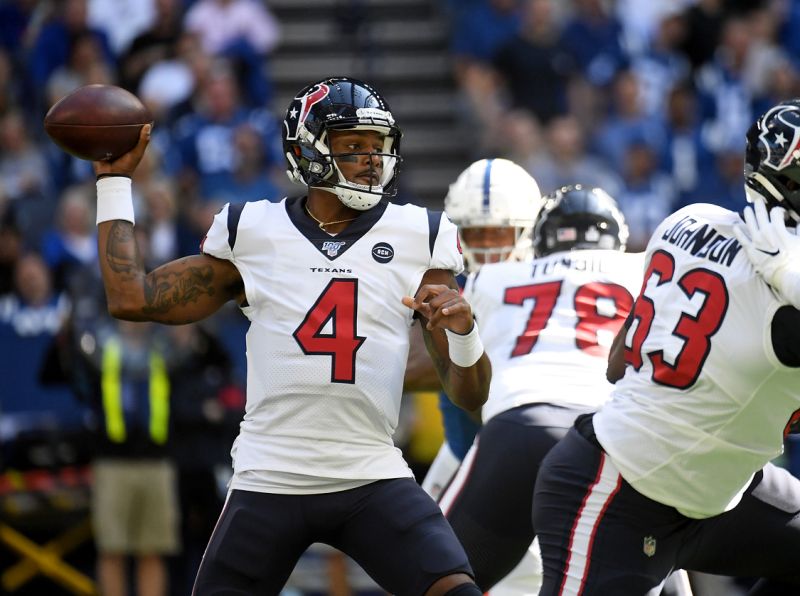 We are now over the halfway point and the trade deadline has ended with a splat. With rumors flying around up until the deadline no moves were made but a lot of moves were discussed. Teams will now work with what they got and hope to improve and make a playoff push in November. This is the time of the year where you need to have figured out what type of team you will be going forward and the contenders seem to have a path figured out. The Patriots and 49ers are built on defense and are still undefeated. The other contenders include the Saints, Packers, Chiefs, and Colts. The Cowboys, Bills, Vikings, Seahawks, Texans, and Ravens are looking to jump into that contender group and just not playoff hopefuls. Not a ton of juicy matchups out there this week but here are a few that caught my eye.

An AFC South showdown between these two teams that met in Week 2 earlier this year. That game was a defensive battle and the first game for Gardner Minshew in which he started. The Texans won that game 13-12. This matchup across the pond feels very different. This is a crucial game where Houston is trying to stay with the Colts atop the division and the Jags are clinging to playoff aspirations. Injuries have crippled this Texans team and it puts even more pressure on Deshaun Watson who has been incredible this season. He has been electric in most games this year but still has those down games which he did back in Week 2 against this Jags team. With the Watt injury for the Texans on the defensive side of the ball that puts even more on the offense to execute at a high level. The Jaguars have been creating a lot of pressure but their secondary can be taken advantage of. If the Houston line can hold up Watson and Hopkins should be able to connect for some big plays in this one.

These teams are pretty close in DVOA rankings according to Football Outsiders as the Jags come in at 12th and the Texans on 14th. The Jaguars offense has been solid and Minshew has a case for rookie of the year in 2019. According to PFF Gardner Minshew entered Week 8 with the fourth-best passer rating on play-action. This week he comes in at number one after destroying the Jets on 5 play-action passes for 117 yards and a touchdown. Leonard Fournette is a big reason for the play-action being successful and his touchdowns are coming. He has only scored once this season which is an aberration at this point. The Texans defense is reeling at the moment without Watt and their secondary has been terrible this year despite the addition of struggling cornerback Gareon Conley from the Raiders. Look for more points this time around as both defenses have lost key pieces since they last met. Minshew is more comfortable as well and DJ Chark and Fournette continue to gain confidence as the season goes on. This game will come down to who can make the big plays.

This game is being played at a neutral site in London and although the sharps will be on the Jags side, give me the better quarterback and the Texans -1.

Sure, I could have picked the Vikings and Chiefs game here and probably should have, but another week of talking about the potentially Matt Moore’s Chiefs isn’t very fun. What is fun? Points. And this game should have plenty of them. Jameis Winston is must-see TV at this point you just don’t know what you are going to get. He could turn the ball over on any play or throw a 60-yard bomb to Evans in double coverage. It is exciting stuff unfortunately for the Bucs it hasn’t quite translated to wins mostly because of the turnovers by Winston. He has the 3rd best ranking in positively graded throws this season according to PFF. He is also 2nd best when it comes to turnover-worthy play rankings at 6.1% per PFF. Luckily, for Winston, this is a great matchup for the Bucs, who like to throw the ball around as they head to Seattle where they have not been very scary this year.

Cincinnati and the Rams both lost by one in Seattle, and the Ravens went in there and beat the Seahawks convincingly. The problem for Seattle is their pass defense, they rank in the bottom 3rd in the league in pass defense DVOA and gave up nearly 500 yards to Matt Schaub last week. The Bucs have a great matchup here on offense it is all systems go for Evans and Godwin this week. On the offensive side of the ball for the Seahawks, it is an interesting matchup as well. Russell Wilson has been great this year he is the highest graded quarterback according to PFF and 3rd in DVOA. Wilson and the passing game is the advantage that the Seahawks have in this game but as we all know Seattle loves to run the ball and that would be ill-advised to rely on this week. The Bucs come into this one as the best-run defense in the league so far according to Football Outsiders. They have done a tremendous job against running backs all year so look for Carson and the running back core to have a tough day at the office. Start your Seahawks receivers this week as I believe Seattle wins this game in a shootout.

Hey, it is Week 9 and not once have the Patriots been featured in one of my articles. That is probably because of their schedule as the Patriots have had an easy run, to say the least. That being said this matchup is probably one of the best matchups of the year. The Patriots defense is on a historic pace and Lamar Jackson is doing things we have never seen before at the quarterback position. The Patriots rank 1st in DVOA on defense and are also ranked number one on the overall ranking. The defense has been phenomenal so far, but you guys have heard all the numbers. The issue with the Patriots is we do not know what they are offensively yet. Tom Brady at 42 is still getting it done at a high level despite a cast of characters at the receiver position that seems to be chopping and changing every week. The offensive line is in the same predicament and has been a revolving door. The offensive line has been creating zero room for the running backs and grades out as the 2nd most stuffed run team right behind the Bengals. As a Joe Mixon owner in fantasy that is saying something. The Ravens defense looked better last week with the addition of Marcus Peters, but still ranks 18th according to DVOA. I expect the Patriots to do what they have done so far and dice Baltimore up with short and intermediate routes. The Patriots will get Rex Burkhead and James White involved in the passing game here as well.

The Ravens and Lamar Jackson come in as the 7th ranked offense in DVOA and number one in rushing offense DVOA. The Patriots defense has let up some big rushing days so far this year and this will be their number one focus coming into this matchup. The Patriots have used man coverage a league-high 62.4% of the snaps according to NFL.com. The problem with playing man against a running quarterback like Lamar Jackson is that he can easily take off and get good yardage before secondary realizes. Devin McCourty on NFL.com said “Honestly, it’s dangerous if you’re in man or zone. I mean, there’s times where they have two guys committed to him and he just outruns them. There’s times they’re in zone and you still have a guy that’s in your zone, so you’ve got one guy that’s playing the guy in the zone, so that leaves one guy with eyes on Lamar Jackson to get him down. He makes them miss, and now he’s gone.” Nonetheless, this is the biggest test that the Patriots defense has had this season. The Patriots will use the strategy of trying to keep Lamar in the pocket by maintaining their lanes and forcing Lamar to make pinpoint throws in man and zone. I wouldn’t be surprised if the Patriots played with more 3 safety looks just due to Jackson’s speed.

What a game for us to cap Sunday night off with! I will roll with the Pats -3.5.

Although this week seems like a less than exciting week I am sure we will have plenty to cover as the NFL always provides the entertainment we need week in and week out. Please check out unwrappedsports.com for more content from our numerous contributors. We have something for everyone over there, come check us out. For even more content check out www.sportcastr.com and the USN family on those live streams. You can find me on Sportcastr @SemiProUSN.