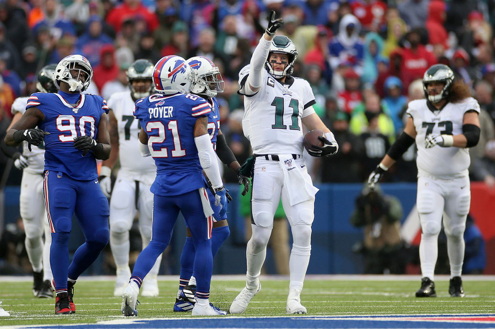 For just the second time this season, the Buffalo Bills experienced defeat as they could not hold off a desperate Philadelphia Eagles team. Philadelphia came into this week eight matchup at 3-4, struggling to stay in the hunt, not only in the NFC East, but even for a wild card spot. The Eagles had dropped their two games prior to week eight, and knew the game against red-hot Buffalo was a must-win. Although the Bills were favored to win, they could not put it together, and played one of their worst, all-around games this year, losing 31-13. The elite defense that the NFL saw to start the season, looked flawed against Carson Wentz and the Eagles offense. Luckily, for the Bills, they will face the 1-7 Washington Redskins next week to get back on track against an easier opponent. 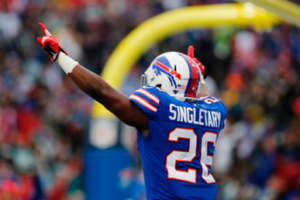 There were not too many good factors of the week eight matchup for the Bills. The offense struggled to get going yet again, as they were only able to score two touchdowns, and no field goals. The defense struggled to stop the Eagles run game, and gave up 390 total yards. Allen had another productive game, as he would finish the day 16/34 with 169 yards and two touchdowns. The turnover bug struck the Bills offense again, as Allen would fumble the ball three times, and although he only lost one, it seemed to be the turning point of the game right before the half. The positive outlook for Buffalo, is that there is good to come. With one of the easier schedules remaining for the Bills, they are still in great position to make a playoff push. Although, they are still looking up at the undefeated New England Patriots, a wild card is still a very viable option due to the weakness of other AFC teams this year. The next four games for Buffalo will come against easier opponents, who have a combined record of 5-25 on the year. If the Bills can get momentum and string together four straight wins, that would put them one win shy of a ten-win season, and the best regular season record the Bills have had since 1999. 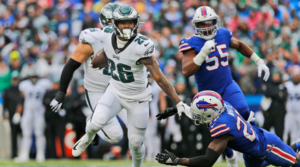 The Buffalo Bills got exposed for the first time this season back in week seven against the Miami Dolphins, and although they held on to win, it seems that the Philadelphia Eagles may have learned a few things from that game. They were able to put together a game plan to shut down not only Josh Allen and the offense, but also how to get their run-game to work. The Bills defense gave up 218 total rushing yards on the game, which is the most all season for the team. The Eagles were able to score three rushing touchdowns, including one 65-yard run by Miles Sanders. Buffalo defense has been able to stop the run game with ease so far, this season, but could not stop Jordan Howard and the Eagles offense. The Bills have depth on defense, and some all-pro level players, but when the opponent has nearly 36 minutes of possession, it is hard to dominate for that long. If the offense can put together longer drives, and give the defense more rest time, it could change the production put out by the defense. Possibly going against rookie QB Dwayne Haskins, could be a great opportunity for a bounce-back game by the Bills defense. 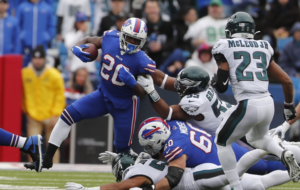 Buffalo defense has been able to carry the team to victory many times throughout this year, because of the lack of offensive production. Week eight was different, neither side of the ball were able to put much pressure on Philadelphia, but especially the offense. Scoring only two touchdowns, and missing one extra point, put the Bills at just 13 points, which is the second lowest of the season, behind the New England game, which coincidentally are the only two losses on the season. Questions surrounding offensive coordinator, Brian Daboll have started, after another lackluster performance on offense, totally just 253 yards. Questions began to swirl, as Daboll did not utilize the running backs as expected. On a wet, windy day in Orchard Park, the Bills only ran the ball with Gore and Singletary 12 times combined. Rookie Devin Singletary ran the ball one time during the first half, and although he caught the ball four times, Singletary was only used on three designed runs. If Daboll wants to maximize his young quarterback to his full potential, he should be using all facets to the offense, instead of making them a one-dimensional team.