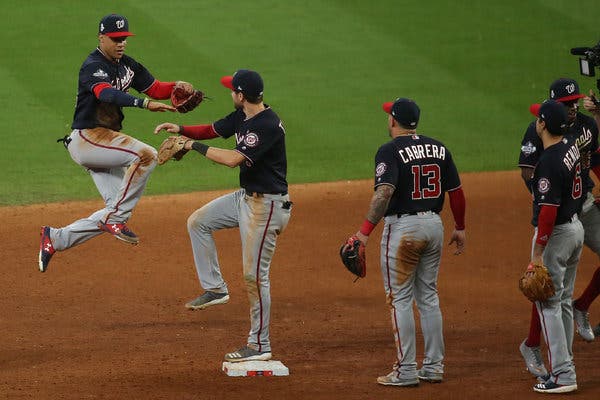 Hey everyone, how’s your week going? I personally have been waiting for the World Series, because like many, I want to see the Washington Nationals pull off the win. The Nationals are a true underdog story. The wild card team beat the odds against the Brewers to get the wild card position and shocked many around the world (including yours truly) when they beat the Los Angeles Dodgers (cries silently because I am a diehard fan) during Game 5 on their way to becoming the 2019 National League Champions. How did they manage to beat the best team in the MLB?

Well I can go on and on about how the Dodgers’ manager, Dave Roberts, has made many questionable pitching decisions over the last three years, but the Nationals do have merit behind them. They have the Cy Young winner, Max Scherzer, who is one of THE best starting pitchers, with stats proving he has the most strikeouts in one season! First baseman: Ryan Zimmerman not only gets the job done defensively, he is also a great hitter and a much-needed leader for the team. Now we cannot forget the 20-year-old Juan Soto, aka. Kid Soto, a great outfielder for the Nationals, and an even better offensive player- y’all should see the homers this kid hits!

For anyone who does not know much about the Nationals history in the MLB, this is the first time the World Series is coming home to the nation’s capital since 1933. This was a time when the team called the Washington Senators faced the New York Giants, and ended up losing the series in 5 games. So technically, you can say that this is the first time the Washington Nationals are hosting the World Series! Now for their opponents, the Houston Astros, have arguably the best offense and an amazing bullpen, with two of the American League’s best starting pitchers in Justin Verlander, and Gerrit Cole. As Dodger die hard, I am privy to the amazing Astro’s offense, with amazing batters like Altuve, Springer, Gurriel, and Correa. The Astros won their first World Series in 2017 against the LA Dodgers, and this being the Nationals first world series, do they stand a chance against the former champs?

The answer is yes. It is always yes when it comes to the sport of baseball. Anything can happen. It’s not even that the Nationals don’t have a good chance. Their amazing bullpen will give the Astros a run for their money. Especially if their offense, with players like Zimmerman, Eaton, and Soto heat up, this World Series is going to be closer than people think. I love a good underdog story, so I will be cheering for the Nationals to win their first World Series, and trust me when I tell you, this series is going to be a good one!