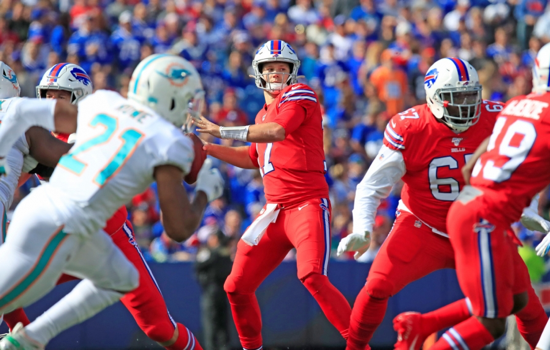 The Buffalo Bills are 5-1 for the first time since 2008, back when Bills fans were ready to name quarterback, Trent Edwards as the MVP of the 2008-09 season. That team would then go on to finish 7-9, and miss the playoffs. This 2019 Buffalo Bills teams is built different, and seem to have better odds than that Buffalo team from over a decade ago.

The Bills would come into this week seven matchup against the Dolphins as a heavy favorite, but did not pan out in the way that many thought it would. Ryan Fitzpatrick would lead the Dolphins to score three touchdowns, which is the most they have scored all season through seven weeks. The Buffalo defense did not look like the top five defense that they have looked like so far, but performed well in clutch moments and had big stops which allowed the Bills to hold onto victory and finish 31-21. If the Bills can carry the momentum from this win into the next two weeks, they could be looking at the 7-1 start to the season. Bills fans will be able to use their home field advantage for the next few weeks as the Philadelphia Eagles and Washington Redskins will make the trip to Western New York. 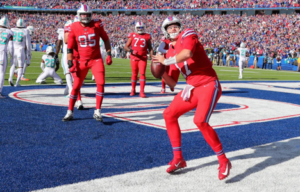 The hope for every weekly review is that Josh Allen will be named the offensive MVP, which would indicate he is doing his job and winning football games for the Bills. Allen again had a great game, and continues to play well against Miami in his career. He is now 2-1 against the Dolphins in his career, and has scored seven total touchdowns and has thrown for over 200 yards in each game. In his first game against the struggling Dolphins this year, Allen would finish 16/26, with 202 yards and two touchdowns. He struggled in the first half on Sunday, as the Bills offense only put together three field goals and trailed at halftime. Allen proved yet again that he is clutch, leading the Bills to victory late in the game. During the second half, Allen would finish 10/11 with 111 yards and threw for two touchdowns, he would have one incompletion during the second half, on a deep ball to Andre Roberts. The Bills finally have a quarterback that can give them at least a chance, and Allen gives Bills fans the hope that each game is still within reach to win. 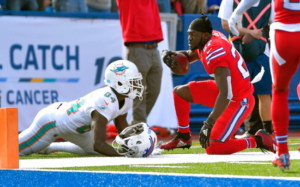 For the second time this season, Tre’Davious White saved the game with an interception, and finished as the Bills defensive MVP. White already surpassed his interception total from last year, as he snagged his third INT of the season, picking off Ryan Fitzpatrick on a game-changing play. Miami was driving, and it seemed that the Dolphins were about to take a commanding 21-9 lead, until Tre White stepped in. Fitzpatrick intended his out-route pass to go to Isaiah Ford, but White stepped in front to pick off the pass and stop the Miami drive. That seemed to be a turning point for Buffalo, as Josh Allen would then lead the offense 98 yards down the field, capped off by a John Brown touchdown. If White did not come up with that interception, and the Dolphins went up by a two-touchdown lead, the game could have finished with a different story. White continues to dominate in the secondary for the Bills and shut down opposing quarterbacks. 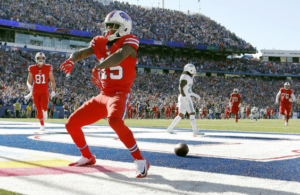 Through seven weeks, there are only two wide receivers in the NFL that have at least 50 receiving yards in each of their seven games. Those two are Saints WR, Michael Thomas, and Bills WR John Brown. Brandon Beane knew that Brown would produce when he signed him as a free agent this offseason, but not many people thought he would be this productive in his short time so far with the Bills. John Brown seems to be a very reliable target for Allen, as he has at least five targets from Allen in every game this year. Brown has been a great surprise for Buffalo so far, as he has been a shining star for the Bills weaker offense. If Beane does in fact, trade for another starting wide receiver before the October 29th trade deadline, Brown’s numbers may, in fact have more production because the defensive attention would be more spread out. If the Bills offense can consistently score over 30 points, and their defense can shut the opposition down, Buffalo will be in a great position to put themselves in a playoff spot later in the season. 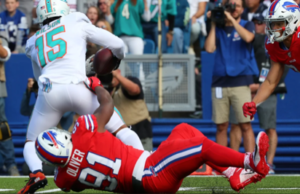 The strong-suit of this football team so far has been the defensive side of the ball. Continuously giving the offense a chance to win, and limiting the opposition. This week seven matchup was the first “bad” game by the defense. They struggled to shut-down journeyman quarterback Ryan Fitzpatrick, and could not seem to put any pressure on the Miami backfield. So far in 2019, the Bills defense as only racked up 13 total sacks, and only one against a weak Miami offensive line. If Buffalo wants to continue to dominate this season and cause other teams to make mistakes, they need more of the defensive line to get sacks. They currently sit in 22nd place in the NFL for total team sacks. Whether Brandon Beane pulls off a trade for a new defensive lineman, or defensive coordinator Leslie Frazier mixes up his formations, if Buffalo wants their strong secondary to continue to come away with turnovers, it starts with the defensive line getting pressure on the quarterback. Their problems won’t get much easier next week as they go up against a stronger Philadelphia offensive line, who have allowed 13 sacks this year. The Bills have four sacks from players not on the line (Alexander two, Poyer one, K. Johnson one) so if they want to rack up more sacks on opposing teams, Frazier may think about incorporating different blitz packages against other teams.